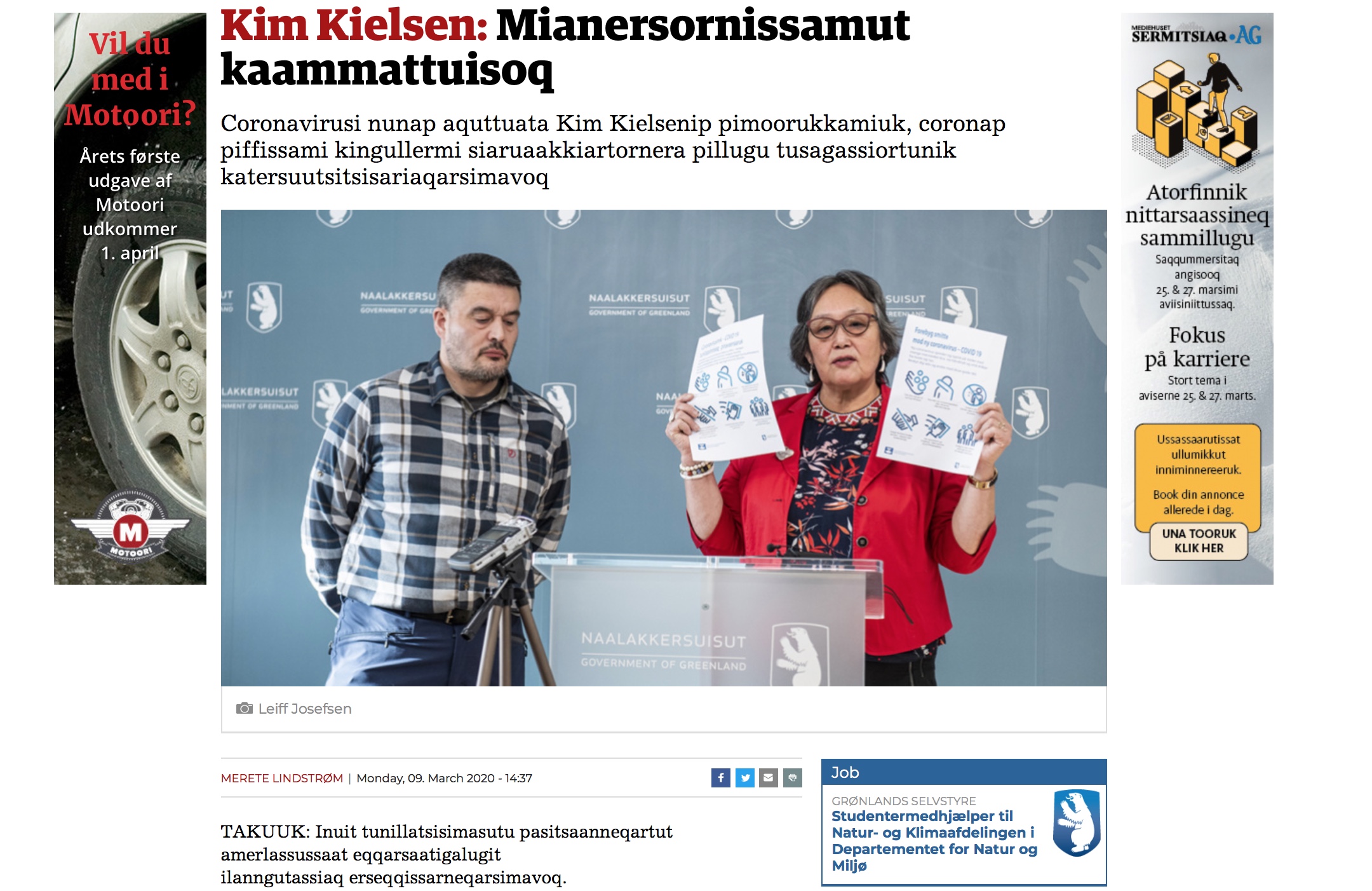 Greenland’s prime minister, Kim Kielsen, and its health minister, Martha Abelsen, talk about the coronavirus at a news conference on Monday, March 9 in Nuuk. (Screenshot from Sermitsiaq AG)

That was the good news received on Tuesday, March 10, when test results for three sick people who were suspected of having been infected with coronavirus, came back negative.

The three had arrived early Monday from Copenhagen to Kangerlussuaq on Greenland’s western coast.

Alexandra Pipaluk Hammeken, one of the three passengers quarantined at the airport hotel until the test results came in, told the Sermitsiaq AG news service that, while the quarantine response seemed a bit exaggerated, it was good to see that the coronavirus threat was being taken seriously.

The 55 other passengers travelling on the same flight, who were under a home quarantine order, can now get out and about, Sermitsiaq said.

But the risk of coronavirus in Greenland is now being taken seriously enough that the country’s leader, Prime Minister Kim Kielsen, held a news conference Monday afternoon on the subject.

Kielsen and Health Minister Martha Abelsen had a message for the roughly 60,000 residents of Greenland: don’t panic, but remain vigilant.

They encouraged people to follow public health recommendations and keep themselves informed via the media and chief medical officer’s website.

The Greenland government’s public health recommendations are similar to those made in Nunavut and Nunavik, which call for frequent hand-washing.

There is no equipment to test for coronavirus yet in Greenland, but efforts are underway to obtain that, Sermitsiaq said.

While Canada has no regular flights to Greenland, the island is connected to the other Nordic countries by scheduled air service.

Meanwhile, all gatherings of more than 1,000 people have been cancelled in Greenland.

The now-cancelled Arctic Circle Race for cross-country skiers, which was to have taken place April 2 to April 5, had expected to draw about 160 participants, including 12 from various countries.