“The crux of my decision is to protect children, they must have a safe home,” says premier 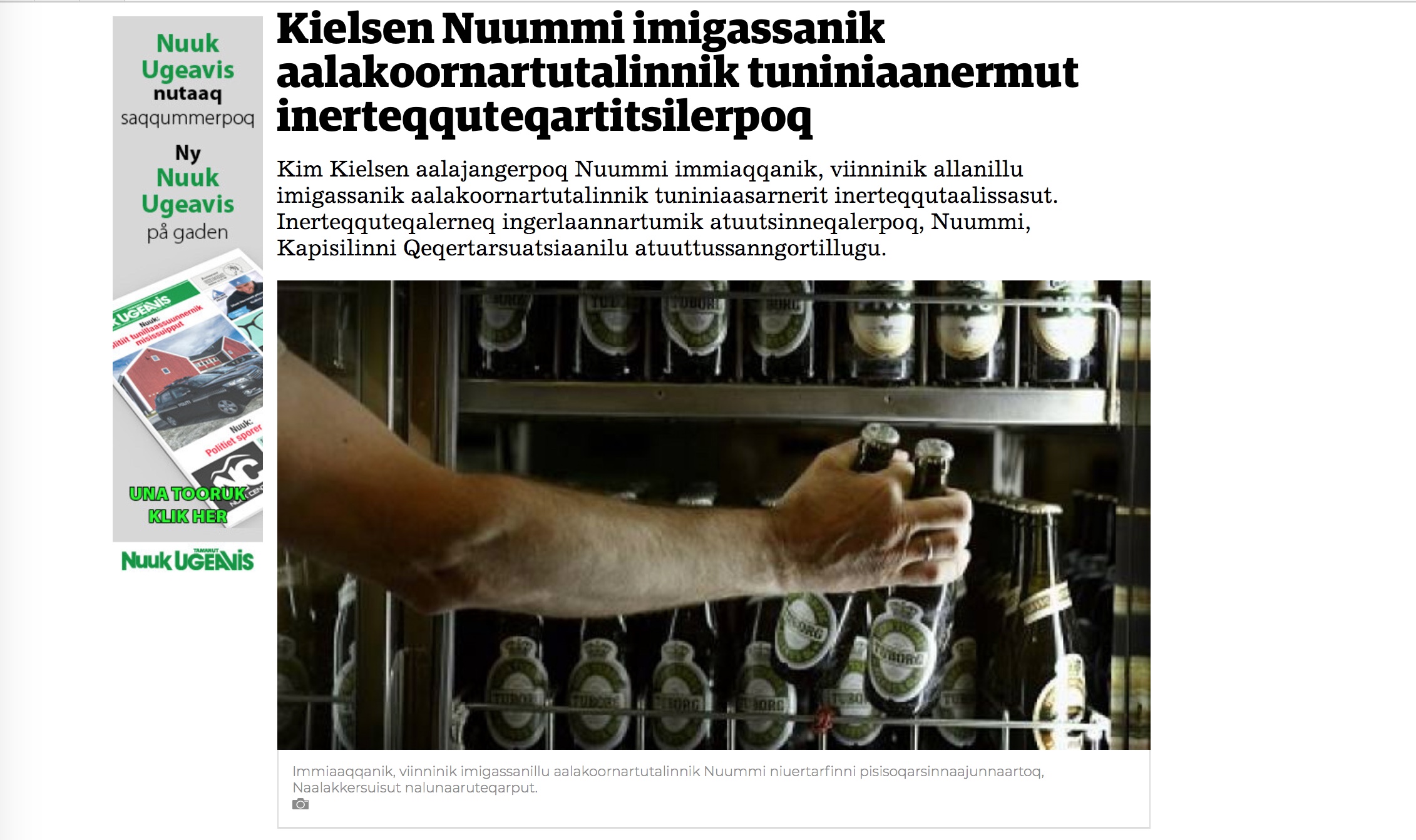 Greenland’s Sermitsiaq AG newspaper reports that Premier Kim Kielsen decided on March 28 to temporarily ban the sale and dispensing of alcohol in Nuuk and two communities in southwestern Greenland. (Screenshot)

You can no longer buy alcoholic beverages in Greenland’s capital, Nuuk, and in two smaller communities in southwest Greenland.

That’s since the government decided last Saturday to place a temporary ban on the sale and dispensing of alcoholic beverages of 2.25 per cent alcohol by volume or more to help protect children from abuse during the lockdown to prevent the spread of COVID-19.

“We have to take many precautions to avoid infection. But the crux of my decision is to protect children, they must have a safe home,” said Greenland’s premier, Kim Kielsen, in a March 28 news release.

“I hope that, as a society, we see the condition of children as a common concern, that we all contribute to a safe society.”

The ban applies as well as to the communities of Kapisillit and Qeqertarsuatsiaat in southwestern Greenland.

The move came after the closure of schools, government offices, restaurants, pubs and cultural events earlier this month.

“Last Saturday we closed down all alcohol sales because we can see that there have been parties, where the official recommendations have not been complied with,” Kielsen said yesterday during a news conference in Nuuk. “There have also been cases of violence in those situations. We must avoid these incidents, which is the reason why we have stopped selling alcohol. It is one of the tools to prevent the coronavirus infection from spreading.”

After hoping to avoid the new coronavirus, Greenland had its first case confirmed on March 16 in a Nuuk resident who had travelled abroad.

The infected person went into quarantine.

And after there were more confirmed infections in Nuuk, the city, with a population about 18,000, imposed a lockdown on March 18 for three weeks.

As of today, there are 10 confirmed COVID-19 infections in Greenland.

Since the lockdown to fight the spread of COVID-19, the crisis centre in Nuuk has also experienced an increase in inquiries from vulnerable or threatened children and abused women seeking safe shelter.

Alcohol consumption at home is thought to be behind that increase in calls.

“The coronavirus situation and especially the closure of Nuuk are pushing families who are already challenged,” said a government news release on March 28.

“The government wants these women and their children to get the help they need, so they have a safe place,” said Marth Abelsen, Greenland’s minister for health, social services and justice, in the release.

In Greenland, there are eight shelters and a national treatment centre for victims of violence.