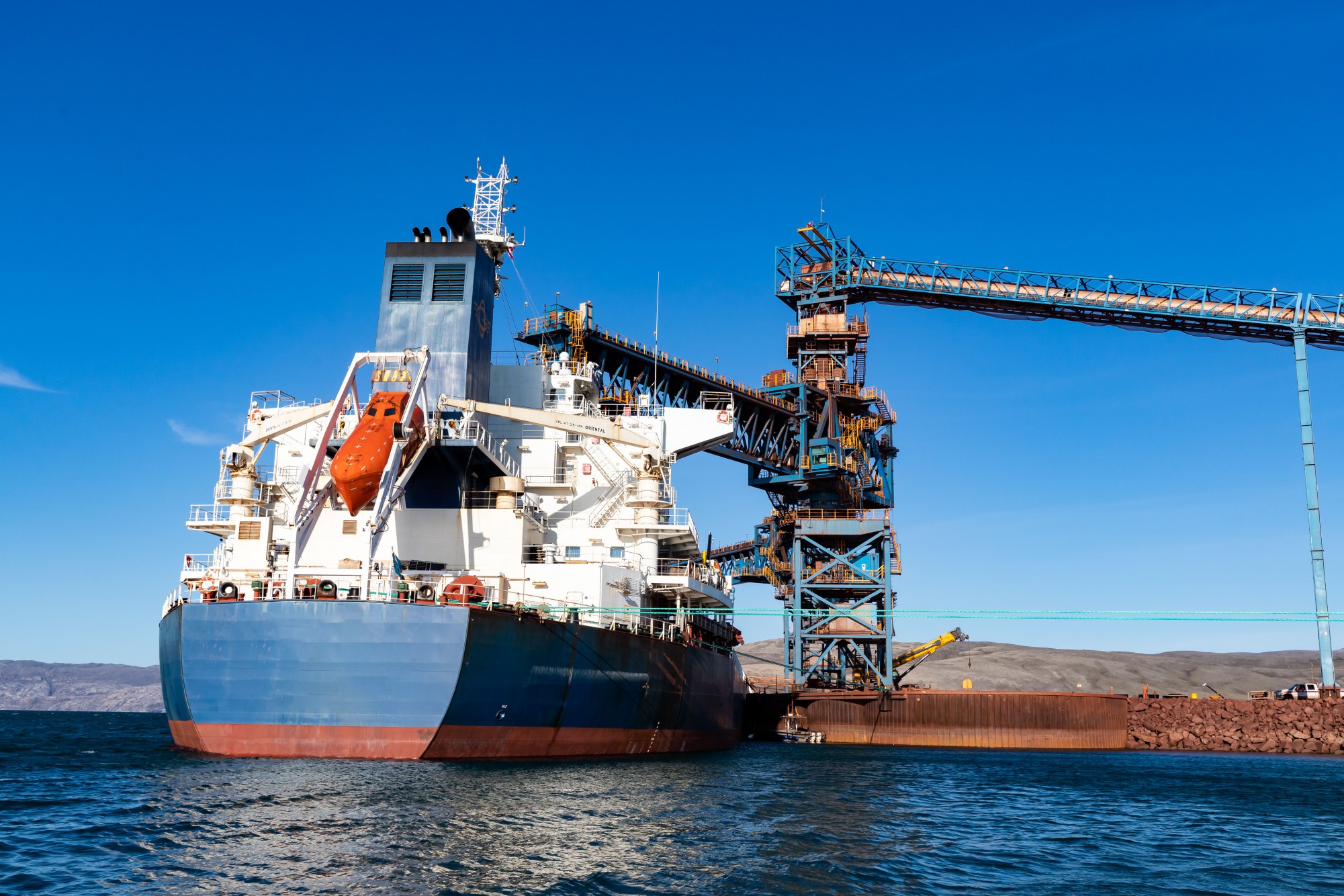 An ore carrier loads up at the Milne Inlet port of the Mary River Mine on north Baffin Island. Denmark, on behalf of its autonomous territory Greenland, has requested a say in the next phase of development of the mine, citing transboundary impacts. (Photo from Baffinland)

Denmark has asked for a role in the environmental assessment of the next phase of development at the Mary River mine on north Baffin Island, Nunavut.

The country is concerned about the environmental impacts of the mine’s expansion plans on nearby Greenland, an autonomous territory of Denmark.

These concerns are raised in a memo from Greenland’s directorate for environment and nature, included in a Feb. 11 letter from Denmark to Canadian federal officials.

“The iron ore has to be transported down through Baffin Bay for processing in Europe, and there are severe environmental impacts both in Canada and along West Greenland that will affect wildlife in Greenland, and probably also for hunting and fishing,” the memo states.

The authors of the memo, researchers Mads Peter Heide Jørgensen and Fernando Ugarte, list the risk of oil spills, whale collisions and accidents along the shipping lane as concerns.

The two major environmental issues they foresee are ice-breaking and noise disturbances caused by shipping, both of which could affect marine mammals like narwhal.

Baffinland is proposing a significant increase in shipping activity as part of its second phase of development.

It is seeking a cap of 176 voyages per year by ship, each of which includes a transit to and from the mine’s port.

By comparison, at the end of Mary River’s 2018 shipping season, 71 voyages had been made, loading up and sailing off from Milne Inlet. 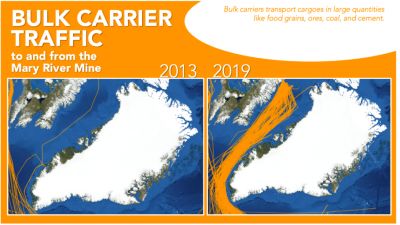 A map from the Arctic Council’s working group on the Protection of the Arctic Marine Environment report illustrates the growth in traffic, and the routes used by carriers for Baffinland, around the island of Greenland. (Screenshot from the Arctic Shipping Status Report, PAME)

A recent report from the Arctic Council’s Protection of the Arctic Marine Environment Working Group looked at increases in ship traffic  across the circumpolar Arctic, and highlighted the significant increase in Baffin Bay as a direct result of the opening of the Mary River mine.

The memo notes that ship traffic will affect the noise-sensitive narwhal, particularly as sailings become daily.

In Baffinland’s current proposal, those 176 voyages would have to occur within the 137 days between July and mid-November.

“Every hunter knows how sensitive narwhal are to noise and ship engines. For the same reason, hunters tend to spot narwhal from the land before the catch begins, and they often use the silent kayaks to catch the narwhal,” Jørgensen and Ugarte write.

U.N. convention could come into play

Denmark asserts it should be allowed a role in the assessment under the Convention on Environmental Impact Assessment in a Transboundary Context, also known as the Espoo Convention, because it was signed in Espoo, Finland, in 1991.

As a convention of the United Nations Economic Commission for Europe, it defines the obligations of all signatory countries to notify and consult one another on projects with environmental impacts that cross international borders.

Canada’s federal Impact Assessment Agency wrote to the Nunavut Impact Review Board, which is currently overseeing the assessment of Baffinland’s expansion plans, at Denmark’s request.

The letter notes that, while Canada did sign the Espoo Convention, it did so under a restriction that this would only apply to environmental assessments under federal jurisdiction.

The NIRB’s recommendations are put forward to the federal government for a final decision on assessments. It’s on these grounds that the Mary River mine expansion could be seen as being under federal jurisdiction.

The NIRB responded to the federal government about Denmark’s request on April 3, first stating that it has had limited experience with applications of the Espoo Convention.

There was one previous example, in which the federal government contacted the board about a proposed aluminum and hydroelectric development project in western Greenland.

At the time, the board did express interest in participating in the environmental assessment, but the conversation went no further as the project didn’t go ahead, according to a letter signed by Ryan Barry, the NIRB’s executive director, which was posted on the board’s registry.

In that letter, Barry clarified a few points from the Greenland memo. He first addressed concerns about icebreaking.

Baffinland has previously proposed extending its shipping season, as well as bringing in two winter sealifts, in December and January.

This would require significant icebreaking in Eclipse Sound.

The company has since stepped back from that proposal following significant backlash from the nearby community of Pond Inlet.

Baffinland now wants to ship from July to Nov. 15, with a few conditions such as confirmation from Pond Inlet’s hunters and trappers organization that the floe edge is no longer being used, and that there is no land-fast ice along the corridor.

Baffinland also said icebreaking would not occur during sensitive periods of the seal life cycle, and that there would be shipping restrictions during the seasonal migration of narwhal in the area.

Greenland’s memo also mentioned a proposed shipping route from the original phase-two development plan that would include icebreaking and increased traffic along the coast of Greenland, which has also since been retracted.

“To clarify, for the Phase 2 Development Proposal Baffinland is proposing to continue using the northern shipping route approved for the Early Revenue Phase of the Mary River Project in 2014, with no deviations into waters off the western coast of Greenland,” Barry writes.

Greenland says that the project’s impacts on whales, seals and walrus may ripple across Baffin Bay.

For example, the memo states that after a century of seeing no bowhead whales in west Greenland, they’ve returned for the last 20 years, with around 1,500 in Disko Bay along the island’s southern coast.

“They use several migration routes between Canada and Greenland and just outside the fjord where the ore ships sail from Canada (Eclipse Sound), where the Bowhead whales wait in the spring for the ice to break up in the Canadian fjords,” explain Jørgensen and Ugarte.

They call the increase in shipping in this area an experiment with unpredictable consequences.

“Overall,” Jørgensen and Ugarte write, “the transportation of the iron ore in the Mary River project must be considered one of the greatest threats to marine mammals in the Arctic—not least because history has shown that the possibilities to restore the situation are very limited.”