Half of Nunavik’s adults now protected against COVID-19, officials estimate 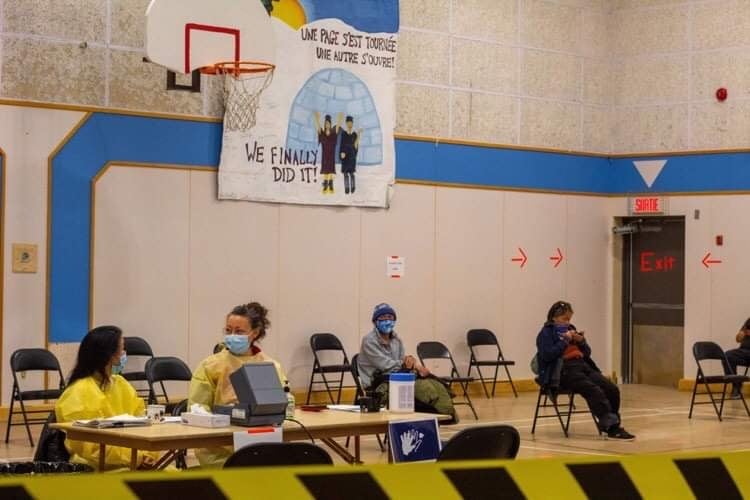 Residents of Inukjuak wait to be immunized on the last day of that community’s vaccination clinic May 1. (Photo courtesy of NRBHSS)

The mayor of Inukjuak received his second dose of the Moderna vaccine last week during a clinic in the Nunavik community of 1,800, the last of the region’s 14 villages to host a second round of immunizations.

Nalukturuk said he feels much better protected against the virus, though he can’t yet say the same for his community.

In its first round of vaccinations earlier this year, just 29 per cent of Inukjuammiut opted to be immunized — the lowest coverage rate among Nunavik’s 14 communities.

Nalukturuk said an estimated 374 residents came out for their shots last week.

“They seem to think we have done pretty well this time,” he said.

“I know we won’t see the benefits of it right away. But I’m hoping for that for my people here.”

Nalukturuk said he has family and friends in Sanikiluaq, for example, who he hasn’t seen in over a year — since Air Inuit stopped scheduled flights to and from the Belcher Island community.

The mayor is hoping better vaccine coverage will mean fewer restrictions for community members in the months to come.

“I think we all tried to convince people to get and get vaccinated,” he said. “But some people I know will not get it, even I drive them to the clinic.”

The Nunavik Regional Board of Health and Social Services says that its health-care staff administered 3,545 second doses of the Moderna vaccine in this second phase of its rollout.

Another 2,350 first doses were administered to Nunavimmiut who hadn’t been vaccinated earlier this year.

But it’s still too early to calculate what percentage of Nunavik’s roughly 9,000 eligible adults have been fully vaccinated now.

That’s because officials still have to tease out the number of non-residents — temporary workers — who received the vaccine, said Dr. Marie Rochette, Nunavik’s public health director.

Rochette estimates, however, that about half of the region is now protected against COVID-19.

“If the first dose can provide about 80 per cent protection, and 95 per cent with the second dose, we are roughly estimating that one out of two adults are protected against COVID-19,” she said.

“We think we were able to achieve that.”

That’s still a way off from the health board’s goal of reaching 75 per cent vaccine coverage in Nunavik.

Rochette said that health officials will be looking at communities where uptake was higher during both phases of the vaccine roll-out to see what they can learn.

“We still hope to understand why some people are still hesitant to take a vaccine that is so effective and so safe,” she said.

“But that’s why we will try to ensure that the offer will be continuous in the community.”

Nunavimmiut can call their local health centre any time to make an appointment to get vaccinated, she said.

Rochette said the health board is also eyeing the opportunity to immunize Nunavik teenagers, since Health Canada approved the use of Pfizer’s COVID-19 vaccine for children as young as 12 years old.

There are still a number of logistical barriers to consider, she said, given the Pfizer vaccine has different storage requirements than Moderna, as well as how to coordinate a school-based immunization program as summer holiday hears.

“It’s an opportunity to reach more of the population,” Rochette said.

“We still want to reach herd immunity. We need to increase the vaccination coverage [to 75 per cent]. If we don’t want to see outbreaks in Nunavik, that’s the target.

“We expect that we’ll be able to lift some of the public health measures that are in place,” Rochette added. “And return to a more normal life for families.”