‘He could feel our pain’: Inuit survivors meet with Pope Francis 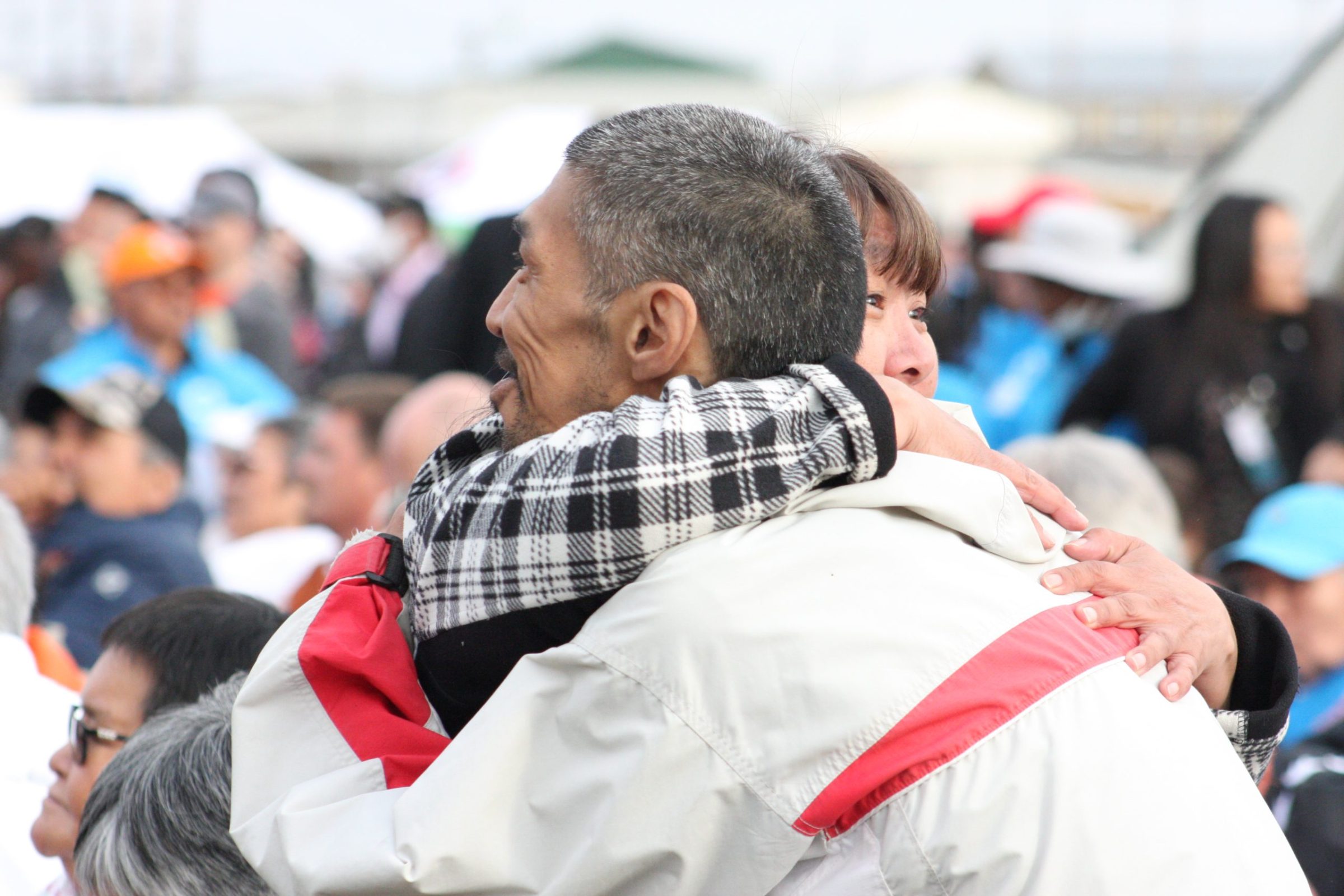 Vincent Hanniliaq, from Igloolik, gets a hug from his sister Janet during the community event that was part of Pope Francis’ visit to Iqaluit on Friday. (Photo by Corey Larocque)

Pope Francis was silent as he listened to Inuit survivors of residential schools tell their stories in the Nakasuk Elementary School gym on Friday afternoon.

That’s according to those who were in the room with the Pope, including former Nunavut premier Paul Quassa.

Francis met with about 100 survivors from across Nunavut, before taking the stage in front of the school where more than 1,000 people waited for him outside.

Quassa said that during the private meeting, Francis apologized to them for what they were put through.

“I think that was the most important thing,” he said.

“I think he said that apology directly from his heart. And he could feel our pain and our memories, and I think that is what counts.”

The meeting, which went for about twice as long as the original 45 minutes it was scheduled for, was held in private.

Quassa said survivors shared their individual stories with Francis, some speaking only in Inuktitut when they addressed him.

“They explained exactly what they had experienced. Us children taken away from our parents, and our parents not really knowing what’s going to happen to us,” he said.

Quassa said that at the age of six, he was taken to a residential school in Churchill, Man., where he spent the next 13 years.

He said he felt like the Pope listened intently as survivors spoke about being taken from their families.

“We were shipped out on a plane,” Quassa said. “I think he really took that into his heart.”

He noted it was the first time a Pope had come to Inuit land, and said it’s something he won’t forget.

“We can say the Pope did land in Nunavut. It’s a historic moment.”

Quassa said he hopes Francis’ visit to Canada, and to Nunavut specifically, will help people heal.

Vincent Hanniliaq, from Igloolik, said he came to see the Pope out of respect for his father, Richard Immaroitok, who was a survivor of Sir Joseph Bernier Federal Day School in Chesterfield Inlet.

“He was abused by a priest,” Hanniliaq said.

“He had a drinking problem. He worked on that problem through counselling. He hardly talked about what happened to him, because he didn’t want it to affect me.”

Nancy Aupaluktuq was one of the people who kept the qulliq lit during the private meeting Francis held with survivors inside the school.

The Baker Lake woman saw seven of her eight children go to residential schools. She said she felt “lighter” after hearing the Pope say he was sorry for what priests and nuns did. She spoke in Inuktitut, with her daughter interpreting.

Her daughter, Martha Aupaluktuq-Hickes, said she didn’t experience abuse herself while attending schools in Yellowknife and Iqaluit, but she witnessed it.

“To this day, I wondered why are you bringing that student to your dorm room? It didn’t sit right,” she said of the actions by supervisors in the school.

James Eetoolook, who flew in from Taloyoak to see the Pope, said it was important for him to be there to support survivors.

“Inuit are close. We are all affected by what happened,” he said.

Eetoolook said although he was pleased to see Francis come to Nunavut, it’s too early to forgive the Catholic Church for its involvement in the residential school system.

“I think we need to work together more closely. Inuit always forgive people when they do something wrong. That’s our lifestyle,” he said.

“They’re requesting forgiveness and we have to reconcile on that.”

Iqaluit was his final stop on the Pope’s six-day Canadian visit. He departed for Rome later Friday evening.

– With files from Corey Larocque