Facility in Quaqtaq receives $350,000 from Quebec 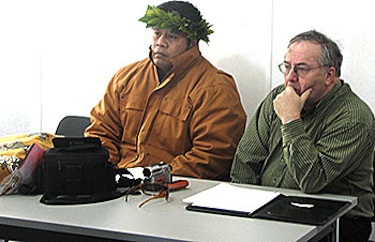 Two fundamentalist Christian missionaries, Vae Eli, originally from Samoa, and Roger Armbruster from Manitoba, were in Quaqtaq earlier this year for the opening of the Aaqqitauvik healing centre, a project supported by money from Nunavik’s Ungaluk Safer Communities Program. (HARVESTED FROM CANADAAWAKENINGMINISTRIES.BLOGSPOT.COM)

A healing centre with close links to two fundamentalist Christian missionaries is among the social and cultural projects that receive provincial money via Ungaluk, Nunavik’s crime prevention program.

Ungaluk is the result of a 2006 deal with Quebec which traded the construction of a provincial jail in Nunavik for about $300 million, with Quebec paying Makivik and the KRG at least $10 million a year until 2030.

Executives from Makivik Corp. and the Kativik Regional Government flew by charter from Kuujjuaq to Quaqtaq to attend the opening of the centre, which was also attended by the presidents of the health board, school board— and fundamentalist missionaries Roger Armbruster of Canada Awakening Ministries and Vaeluaga Eli, a Samoan dancer and evangelist with the New Waves Ministry, who brought gifts for everyone.

Armbruster “commended the regional government leaders of Nunavik for being gracious to support this healing centre, not only because it would benefit their own people, but that they were also humble enough to acknowledge that they, too, were in need of further healing themselves,” according to his website: hiscanadaawakeningministries.blogspot.com.

Eli and Armbruster are part of a loosely affiliated network of independent preachers who have nurtured and influenced the spectacular growth of an Inuit-run fundamentalist Christian revival in Nunavut and Nunavik.

It’s one of several ministries that have helped the Inuit Christian movement in Nunavut and Nunavik grow by leaps and bounds since the 1990s, sometimes with the help of municipal governments.

Connecting Inuit with indigenous people in the South Pacific is also part of the vision of Canada Awakening Ministries, according to previous web site posting in which Armbruster stressed the importance of “reconciliation” between different indigenous peoples.

A ceremony of reconciliation (led by a Fijian Pentecostal group) led to the land in Fiji becoming more fertile, he said.

As for Eli, on the web site canadianchristianity.com, he says when North America’s indigenous peoples embrace fundamental Christianity, “revival will hit our land and our continent, and the whole world will fear and bow to the name of our God.”

At the Aaqqitauvik centre’s opening in February, promoter Eva Deer said the goal for this healing centre is “to serve our people, people who are in need socially, emotionally and spiritually.”

The centre will also train people in counselling and social development, she said.

The money coming to Ungaluk, whose name means the first ring of snow blocks at the base of an igloo in Inuttitut, is supposed to be “a flexible tool designed to prevent and combat crime, to promote safe and healthy communities.”

For 2009, Ungaluk has at least $10 million to distribute — and is looking for more projects to sponsor, Ungaluk coordinator Andy Moorhouse said at the last regional council meeting in Tasiujaq.

A committee named by Makivik and the KRG determines what the regional needs are and set priorities for spending the money.

Proposals approved by Ungaluk’s board this past April included projects for the purchase of musical instruments in Kangiqsualujjaq, graduation trips, Brownies and Sparks groups in Kangiqsujuaq, a men’s heritage program in Akulivk and camping trips for elders and youth.

The largest amount of money handed out in April went to a project promoted by Makivik, which received $422,5o0 to help pay to send a Nunavik delegation to the 2010 Olympics.