Nunavut could see annual price hikes averaging up to $1,400 per household 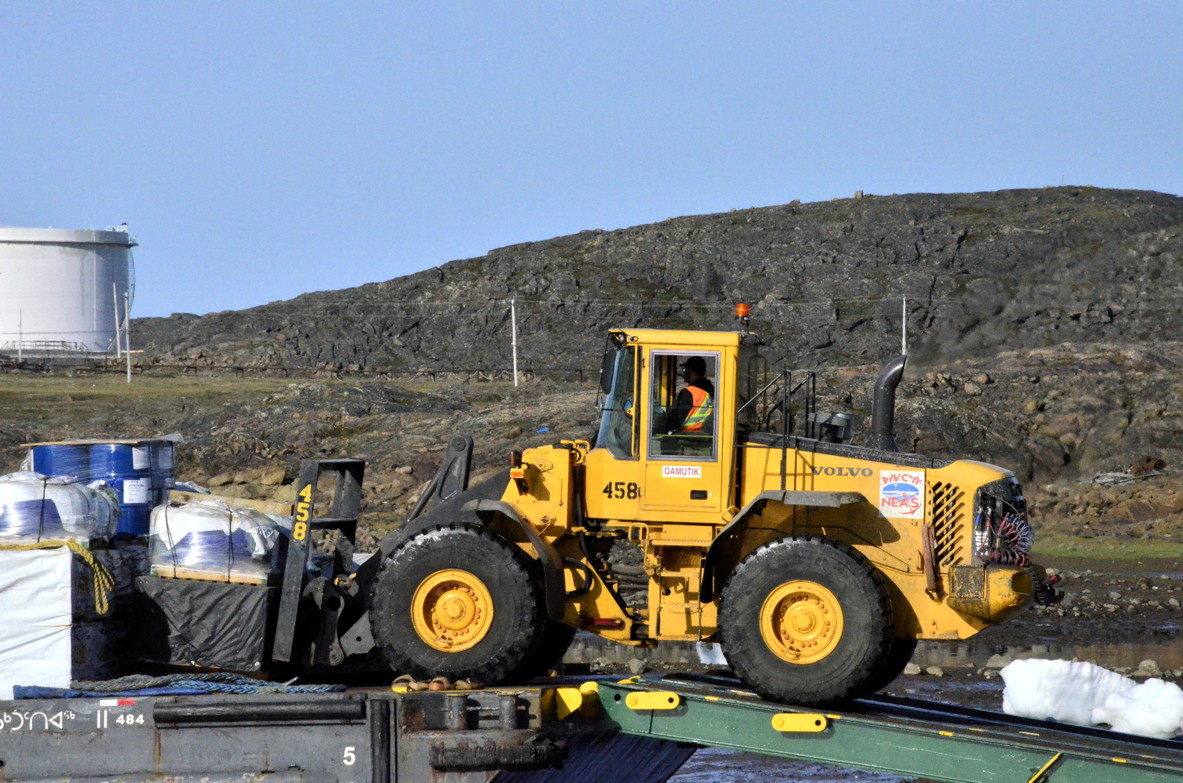 New rules for marine fuels used by Arctic sealift vessels will lead to big price hikes for food and other commodities in Nunavut this year, and even greater increases if a proposed ban on all heavy fuel oils goes into effect in the future, Transport Canada said in a report to the International Maritime Organization last December.

The impact assessment report finds that the combined effects of a low-sulphur fuel regulation that kicked in this Jan. 1, plus a proposed future ban on all HFO fuels in the Canadian Arctic, could cost each Nunavut household up to $1,400 per year.

“This could include direct and indirect effects on the health and quality of life of Indigenous and Inuit peoples living in the Arctic,” the report said. 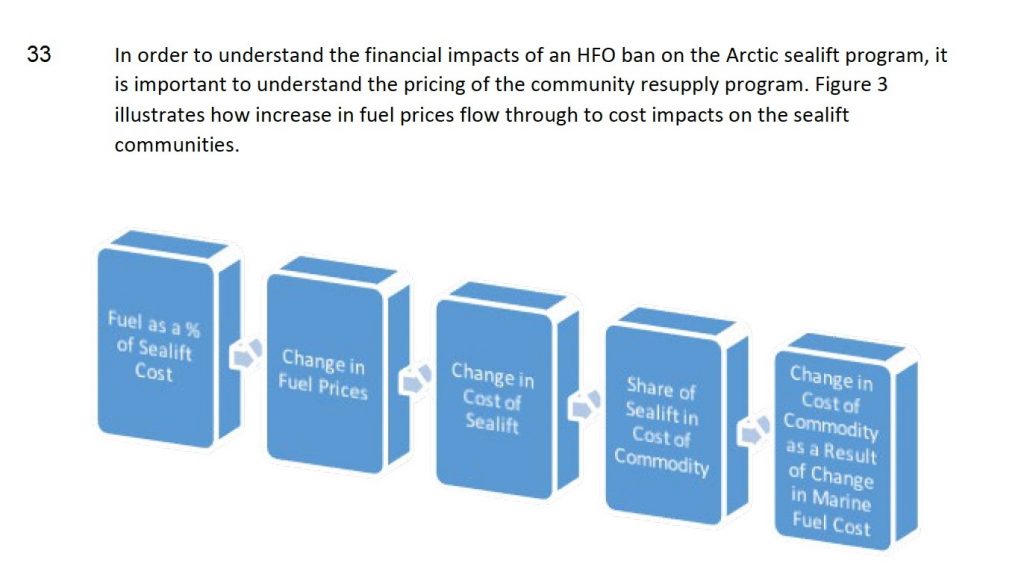 This image shows the method that Transport Canada used to calculate the price impact of an HFO ban in the Arctic.

As of Jan. 1, under the IMO’s Polar Code, all vessels operating in the Arctic must start using low-sulphur fuels, with a sulphur content no greater than 0.5 per cent.

That rule, aimed at reducing air pollution, applies to all vessels, including sealift cargo vessels operating in Arctic waters or in the waters of Hudson Bay, James Bay or Ungava Bay, the regulations state.

Vessel operators who install scrubbers onto their ships’ exhaust systems are exempt; all others must start using low-sulphur fuel this year.

Most Arctic cargo vessels aren’t likely to use scrubbers, and will move instead to more expensive low-sulphur or distillate fuels this year, which will lead to an immediate impact on Arctic food prices, the report said.

In its report, the federal government says the new measures, current or proposed, are nevertheless good for the environment, reducing air pollution and black carbon, a major contributor to climate change.

But at the same time, they may damage the well-being of Inuit and other Arctic peoples.

That’s because Canadian Arctic shipping companies will pay between nine per cent and 12 per cent more for the legally mandated low-sulphur fuels this year.

It’s also possible that, in time, those prices could come down due to market forces, especially if lower sulphur fuels become more available in the future, the Transport Canada report says.

But if a total ban on heavy fuel oils is put in place on top of the low-sulphur regime, prices could rise even higher.

The report calculates an HFO ban could increase the cost of community resupply by a further four per cent to 11 per cent.

The sealift firms will pass those costs on to their customers, which means Arctic residents will pay higher prices for food and other commodities, the report said.

The low-sulphur cap will increase Nunavut food prices by up to 1.9 per cent, with an estimated $6.1 million increase in prices for consumers.

For the average Nunavut household, that means they’ll have to spend between $535 and $713 more to buy what they need this year.

This table shows the estimated economic impact of the new regulation that mandates low-sulphur fuels.

So in a worst-case scenario, the combined impact of the two measures means a $1,392 annual hit to the average Nunavut household.

The table shows the additional potential impact of a future ban on HFOs.

Nunavut Tunngavik Inc. passed a resolution last October calling for a total ban on HFOs, and the Inuit Circumpolar Council also supports such a ban.

It’s not clear, though, whether NTI delegates were provided information about the potential economic impacts of an HFO ban when they voted in support of it last fall.

And the report quotes Statistic Canada’s finding that 55 per cent of all adults in Nunavut and Nunavik over the age of 25 live in households experiencing food insecurity.

For the Nunatsiavut and Inuvialuit regions, that food insecurity figure drops to 42 per cent and 33 per cent respectively.

“Any increase in consumer goods costs, even as low as 4 per cent, will impact the purchasing power of already vulnerable communities,” the report said.

The list of harmful economic impacts also includes the following:

• More expensive household items, such as furniture, refrigerators and stoves.

• Higher costs for equipment used in food harvesting, such as firearms, ammunition, fuel and camping supplies.

• Increased housing costs, due to increased costs in construction materials, leading to a reduction in the number of housing projects.

• Increased costs for territorial governments, which import medical supplies and other goods into communities.

And a ban on HFOs in the Arctic could lead to a reduction in black carbon, a major contributor to climate change.

Although black carbon, contained in soot and other exhaust emissions, doesn’t remain in the atmosphere as long as carbon dioxide, it can have a major effect on the rate of climate change in the Arctic.

It’s estimated that black soot that settles on snow and ice causes greater absorption of warm sunlight, leading to higher rates of melting.

In its report to the IMO, Transport Canada estimates a future HFO ban could reduce sulphur oxide emissions by 80 per cent, black carbon by another 23 per cent, and fine-particulate matter by 31 per cent.

“The impact assessment of the impact of an HFO ban on Canada’s Arctic communities and economies shows both positive and negative impacts,” the report said.

Meanwhile, a new European study shows that new low-sulphur fuels may actually cause an increase in black carbon emissions.