Homicide in northern Canada: it’s who you know, StatCan says 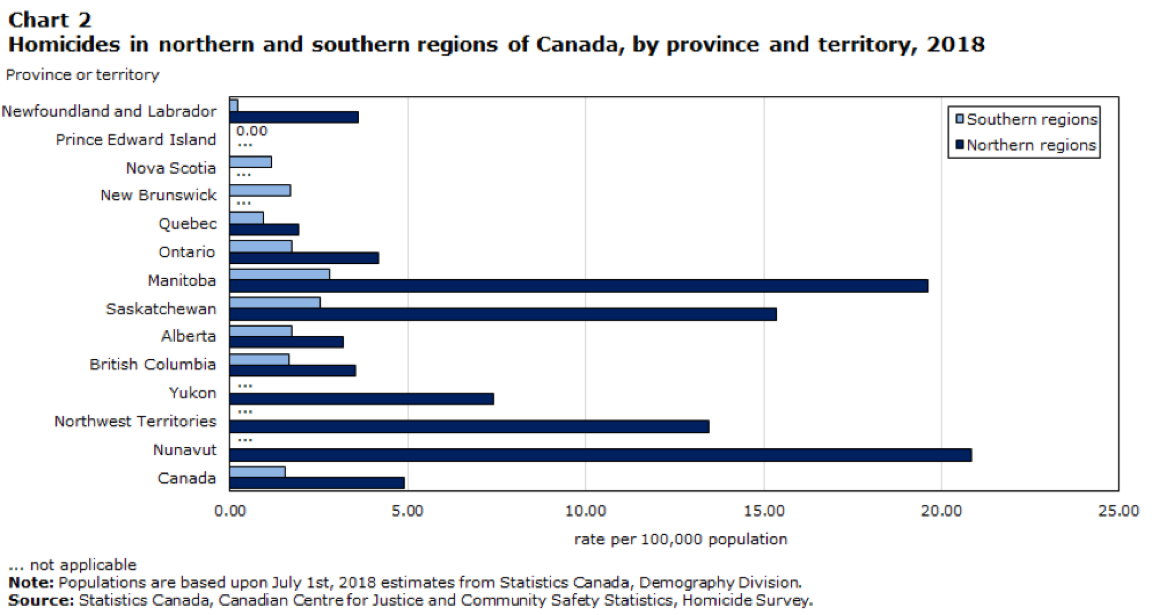 If you live in northern Canada, the greatest threat to your life is posed by people you know, such as family members and friends, and the most dangerous place for you to be is inside a home, Statistics Canada found in a report released last week.

And if you’re a northerner, you’re three times more likely to die by homicide than people who live in the southern parts of the provinces.

These and other findings are contained in a new StatCan report on the prevalence of homicide across Canada in 2018.

They show that in 2018, Nunavut saw the highest number of homicides recorded since the territory’s creation in 1999: eight, up from six in 2017.

And except for the eight homicides that Yukon recorded in 2017, Nunavut’s 2018 figure represents the highest number of homicides that police have reported in any of the three territories since 1999.

That’s consistent with crime rate and crime severity statistics for Nunavut released this past July, revealing a big increase in sexual assaults and other categories of violent crime compared with 2017.

The July 2019 report also showed that in addition to the eight homicides, eight attempted murders also occurred in Nunavut in 2018.

It’s who you know

The most recent numbers show 93 per cent of northern homicide victims are killed by someone they know and that three in every four such victims die inside a residence.

“The most significant [difference] being that victims in the North were less likely to be killed by a stranger (seven per cent) than in the South (19 per cent,)” the report said.

For the purposes of the report, StatCan defines the “North” as the three territories plus the northern regions of provinces.

Using that method, StatCan found that in 2018, homicide rates were three times higher in the northern regions of Canada than in the southern regions.

Homicide a barometer for violence

And because homicide is defined the same way across many parts of the world, it’s a useful indicator for overall levels of violent crime, StatCan said.

“Thus, homicide is important to examine, not only because of its severity, but also because it is considered as a comparable and reliable barometer of violence in society,” StatCan said.

In an earlier article published in 2017, StatCan said factors associated with higher violent crime rates are far more common in the northern territories than in southern Canada.

“The territories also have higher proportions of persons identifying as Indigenous, lone-parent families, persons with less than a high school diploma and crowded dwellings—again mainly in Nunavut and, to a lesser extent, in the Northwest Territories,” the 2017 article said.

Among Indigenous peoples living across Canada, the police recorded 140 homicides, down from 157 in 2017.

That means that although Indigenous people make up only about five per cent of Canada’s population, they accounted for 22 per cent of all homicide victims in 2018.

The homicide rate among Indigenous females rose slightly in 2018 from 2017.

“The solved rate for Indigenous and non-Indigenous females was almost the same (86% and 88% respectively),” the report said.

“The relatively low solve rate for non-Indigenous male victims may be related to the fact that 60 per cent of these unsolved homicides were gang-related, a type of homicide that tends to be more difficult to solve,” the report said.