Honourable mentions for Newsmaker of 2021 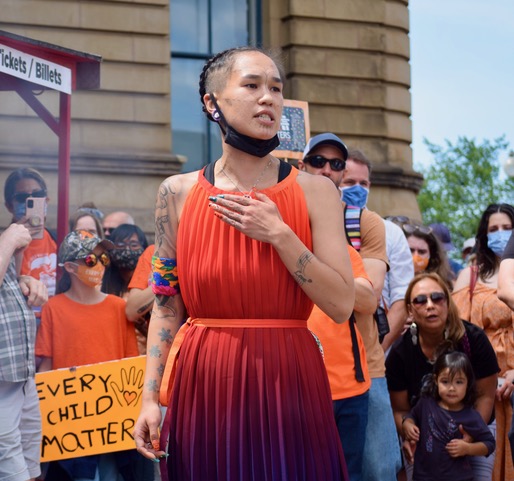 The story of the Nuluujaat Land Guardians’ blockade of the Mary River iron mine captivated the country’s attention for two weeks. It stood out in a year of startling, inspiring, infuriating news stories, which is why Nunatsiaq News picked it as its Newsmaker of 2021.

But there were some other big newsmakers in 2021. Here are some of the honourable mentions.

Mumilaaq Qaqqaq — Nunavut’s former member of Parliament had a rollercoaster of year, politically and personally. She drew attention to what she called “deplorable” housing conditions across the territory in a report that was arguably the high point of her nearly two years as a parliamentarian. But she also picked a fight with Liberal counterpart Yvonne Jones from Labrador, challenging her to validate her “Inuk-ness.”

Qaqqaq secured the NDP nomination to run for a second term, only to turn around just a few weeks later and announce she wouldn’t seek a second term.  In her final speech in the House of Commons, she drew attention to the plight of other Indigenous MPs, saying she never felt like she belonged and asserted she had been profiled by Parliament Hill security.

Dr. Michael Patterson — Nunavut’s chief public health officer became the territory’s public face in the fight against COVID-19 in 2021. He and then-premier Joe Savikataaq held regular news conferences in the spring to share updates about active case counts and to tell Nunavummiut what they needed to do to stop the virus’ spread. Two years ago, public health officers were largely unknown public servants but COVID-19 put them front and centre, making Patterson and his counterparts household names.

Iqaluit Mayor Kenny Bell — Iqaluit went through a series of difficulties in 2021. In April, a two-month COVID-19 outbreak forced the city into lockdown. In October, the city faced another dire situation when diesel fuel was discovered in its drinking water supply, forcing Iqalummiut to endure a two-month period when they were not able to drink their own tap water.

Bell teamed up with a fundraising effort to raise money for Ottawa’s Children’s Hospital of Eastern Ontario by shaving his head, something he did because the hospital serves kids from Iqaluit and Nunavut.

Gov. Gen. Mary Simon — A well-known Inuit leader from Kuujjuaq, Simon was the right person at the right time to bail Canada out of a royal mess, following the resignation of beleaguered former governor general Julie Payette.

The timing was right for Canada to have its first Indigenous governor general. Canadians were reeling after learning that hundreds of Indigenous children were buried in unmarked graves outside of former residential school sites. In a year when “reconciliation” was on everyone’s lips, Simon seemed like a steady hand at the wheel.

P.J. Akeeagok — In a bold career move, Akeeagok quit his job as president of the Qikiqtani Inuit Association, one of the most powerful leaders in the territory, to throw his hat in the ring for a seat as a member of the legislative assembly. The gamble paid off. Next up, he challenged former premier Joe Savikataaq and veteran cabinet minister Lorne Kusugak for the Government of Nunavut’s top job and won.

Lori Idlout — The Iqaluit lawyer started out 2021 representing the Nuluujaat Land Guardians — this year’s Nunatsiaq News newsmaker of the year — and ended it representing all Nunavummiut in the House of Commons. Idlout was elected Nunavut’s member of Parliament in the September federal election. She held onto the seat for the NDP after barely getting her hands on the right to be the party’s candidate. She won the NDP nomination by a coin toss over another challenger.

Idlout instantly established herself as a strong presence in the federal NDP, becoming her party’s Indigenous affairs critic, by speaking Inuktitut in the House of Commons and by pushing the Liberal government on northern housing.

Joseph Takpannie — One of the most popular and heartwarming stories for Nunatsiaq News’ readers wasn’t from world of politics at all. Joseph Takpannie, a 13-year-old in Iqaluit, who likes to fix up old bicycles he salvages from the dump gets them back on the road for Iqaluit kids to enjoy. Readers loved his spirit in a year plagued by bad news.

Shina Novalinga —TikTok came on strong in 2021 and this Nunavik musician became a powerhouse in the new social media sensation. The Nunavik musician drummed up more than 1.6 million followers who watch her videos in which she shares aspects of Inuit culture. She used that fame to draw attention to a GoFundMe campaign that raised nearly $300,000 to buy bicycles for all the kids in her home town of Puvirnituq. Her example was just one Nunatsiaq News reported on in 2021 of Inuit — particularly women — enjoying success on social media when they use it to help people understand their language, culture and traditions.