‘They never looked back, just focused on their jobs and helped the community,’ says SAO 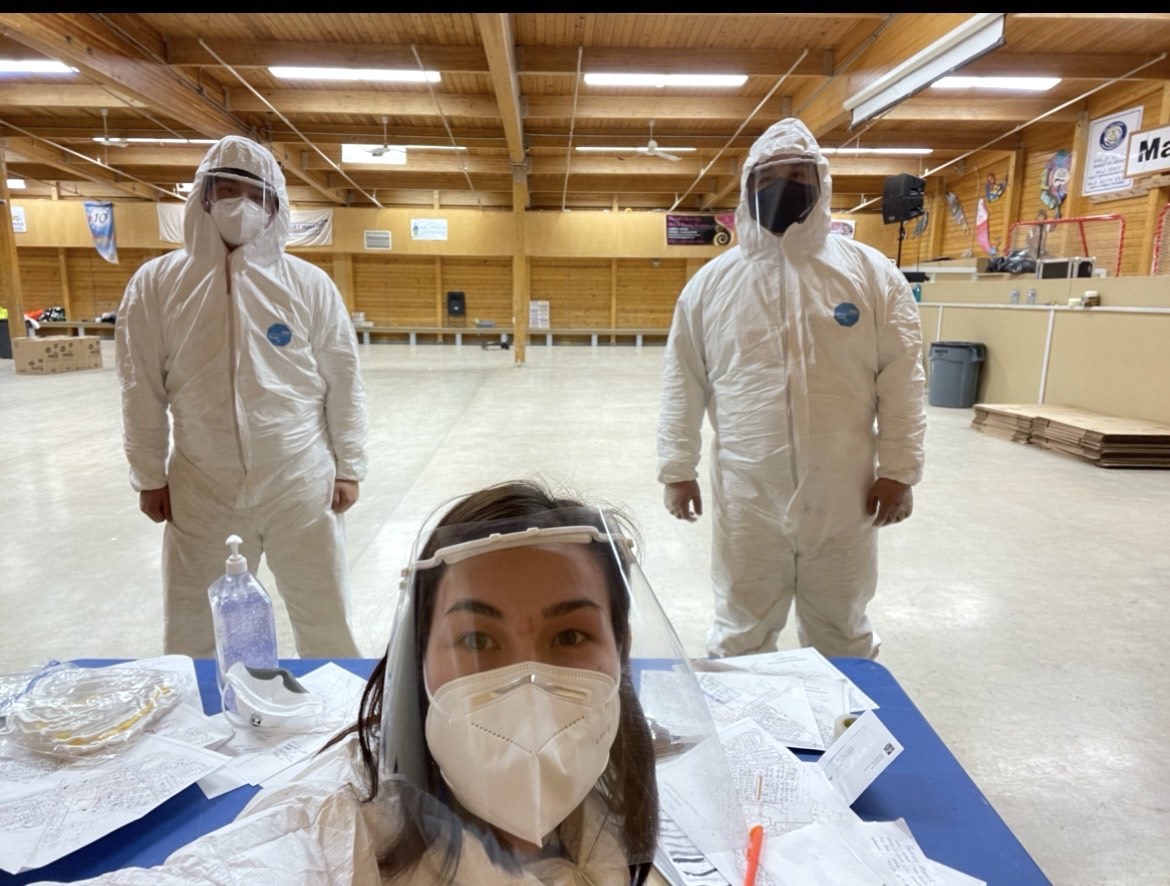 Amber Kadjuk, Arviat’s director of community development, gets ready to start filling hampers in the community hall during the pandemic with her staff Anthony Malla and Andrew Kuksuk. (Photo courtesy of Amber Kadjuk)

Arviat hasn’t seen a new case of COVID-19 since March 13. Prior to that, from November through March, there were 339 cases in the community of about 3,100 and a series of lockdowns, all during the coldest and darkest time of the year. 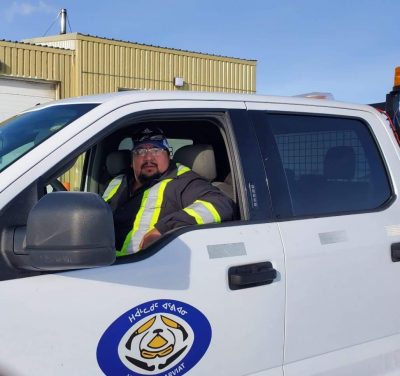 Daniel Kablutsiak, the director of public works for the Hamlet of Arviat, sits in his work truck, which doubled as his office for two weeks while he was in isolation. (Photo courtesy of Daniel Kablutsiak)

Daniel Kablutsiak, the hamlet’s director of public works, said everything was more challenging.

“At beginning of COVID, I had a daughter who tested positive, and my whole household had to be in isolation, so I made my work truck into my office,” said Kablutsiak, who oversees services such as water delivery, garbage pickup and road clearing.

Planning did help, he said.

“For 10 months, we knew it was pretty much a waiting game until we were hit with COVID-19, so we were prepared for it,” he said.

Kablutsiak’s crew includes 12 truck drivers during the week and 12 more on the weekend, but in case Arviat got hit hard, he enlisted backup drivers, “so we wouldn’t be left shorthanded.”

After eight of his crew had to go into isolation, “I used my Plan B to cover for them,” he said.

Fortunately, there was little snow to plow until March. Still, Kablutsiak said he was at work 15 hours a day.

“It got a little tiring. Day in and day out, after whatever hours of working, you go home, stay with your family. The next morning, you regroup and go back … it was just routine,” he said.

Amber Kadjuk, the hamlet’s director of community development, was also kept busy. She worked with others to fill hampers of food and dry goods for 642 households in Arviat. From packing to delivery, that process took 12 days, an operation she repeated three times during the course of the pandemic.

At home, “the number one thing was to disinfect my phone,” Kadjuk said. Then she would undress in the laundry room and head straight to the shower.

While her household stayed free of COVID-19, they were also in isolation for two weeks, due to potential exposure to the virus, and during the pandemic her co-workers similarly had to go into isolation. 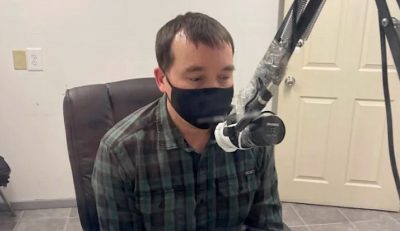 Kadjuk also managed the community radio station, Arviaqpaluk, which operated 16 hours a day, seven days a week, with six staff. It was the go-to information source during the lockdowns, she said, with music, games, various talk shows and regular information sessions with the mayor and Nunavut’s chief public health medical officer.

“I think it was the No. 1 lifesaver for COVID here,” she said.

Also on the go was bylaw officer Peter Nibgoarsi, who supplied all retail stores and government buildings with PPE on a daily basis.

The hamlet had enforced social distancing for so long before the outbreak started that he didn’t have to enforce public health measures much, Nibgoarsi said.

“The streets were empty, so it was not our usual,” he said.

And Stanley Komakjuak, a water truck driver and the hamlet fire chief, worked around his children being at home while school was closed. Luckily, he said, there were only two fires, neither major.

England said he was grateful for the support of the entire hamlet team and their families.

“They all punched through the fear of COVID, replaced it with knowledge, and hit the ground running to support all Arviammiut. They never looked back, just focused on their jobs and helped the community,” England said.

And he also praised Mayor Joe Savikataaq Jr., who answered “never-ending phone calls, texts, emails from people who had questions, ideas, or concerns.”

For his part, Savikataaq said England managed everything “behind the scenes and way below the radar.”

“It is because of his great dedication that we did what we did. On top of all the COVID work, he still managed to continue in the normal day to day the operations that a hamlet delivers, including preparing for budgeting as fiscal year is ending.”