In Arviat, health-care workers have been calling people up and visiting houses and worksites as part of a surveillance testing program for COVID-19. This program was able to uncover latent cases of COVID-19 this month. (Image courtesy of Wikimedia Commons)

It was mid-January and Nataasha Komakjuak had just spent a month in isolation with her husband and nine children. 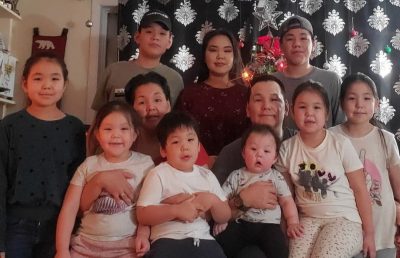 Nataasha Komakjuak spent a month in isolation with her husband and nine children during the first outbreak in Arviat. She says her community is strong, and can beat COVID-19. (Photo courtesy of Nataasha Komakjuak)

Her 15-year-old son was one of the first in Arviat to test positive for COVID-19, where an ongoing outbreak has resulted in 250 positive cases, and has taken one life.

Komakjuak said she got a call from public-health officials in late November, saying her son had been in close contact with somebody who tested positive for COVID-19.

Because her family of 11 shares a three-bedroom home, they isolated together and submitted themselves to periodic nasal swabs to test for the disease, even Komakjuak’s nine-month-old.

Had she not received that call, her family likely would have never known her son had caught COVID-19, because he never exhibited any symptoms.

It’s a hallmark of the COVID-19 pandemic, and the reason people across the world have adapted to life-altering changes like lockdowns, mask-wearing and staying the ubiquitous six-feet apart: SARS-CoV-2, the virus that causes COVID-19, spreads easily, including between people without symptoms.

A cunning virus requires equally cunning detective work to stay one step ahead of its spread.

That’s how public-health officials in Nunavut were able to uncover 18 new COVID-19 cases in Arviat in January, even though those tested were not showing any signs of the disease at the time.

According to Dr. Michael Patterson, the territory’s chief public health officer, the virus most likely never left the community. Instead, it continued to pass from person to person, unnoticed.

It’s possible its presence wouldn’t have been discovered until somebody experienced the telltale dry cough or fever, and asked for a test. (Patterson points out some of the most recent positive cases are now showing symptoms, although they were asymptomatic at the time of testing).

But time – even a short period of it – is critical when trying to contain a virus that spreads exponentially.

Public-health officials use a specific set of tools to monitor outbreaks. These tools collectively have a fancy name – infectious disease surveillance. Some are basic things, like symptom screening and contact tracing.

Others are more inventive.

Last year, the federal government released a COVID-19 tracking app that uses Bluetooth to alert users if they have been in close contact with somebody who tests positive for COVID-19.

Officials in Yellowknife have found undetected cases by monitoring raw sewage for signs of the virus in the city. 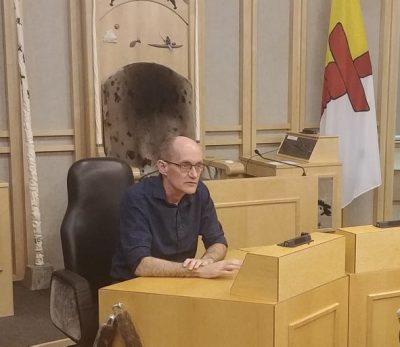 In Arviat, health-care workers are asking people to voluntarily get swabbed for COVID-19 as part of a surveillance testing program.

According to Patterson, people are chosen for testing because they are contacts of people who have caught the disease, or contacts of those contacts.

Health-care workers are also visiting high-traffic areas like worksites to administer the infamous nasopharyngeal swab – the one inserted into the nostril to take a sample from the back of the throat.

Testing is voluntary, Patterson said, and by and large people are willing to do it, although some are no longer so enthusiastic.

“Some people have had multiple exposures, so they have been swabbed several times,” Patterson said.

“It’s not something that everybody wants to do again if there is no need.”

He said there isn’t a way to quantify how much spread is avoided through surveillance testing. Part of the problem is that while some of the positive tests this month are new cases, others may just be the result of people who already had the disease continuing to shed the virus – in which case they are not infectious.

Patterson did remark on what he saw at the very beginning of the outbreak versus now.

“It had spread far, and spread fairly fast by the time the initial case was diagnosed,” he said.

“In this case that hasn’t happened, and part of that is because of the surveillance … public health measures in place remain tighter than they were back at the end of October.”

Dr. Anna Banerji, the director of global and Indigenous health at the University of Toronto’s Temerty Faculty of Medicine, calls infectious disease surveillance an “early-warning system” for outbreaks. 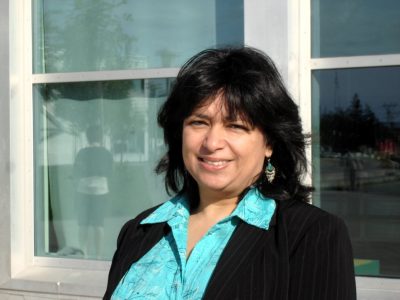 Dr. Anna Banerji, the director of global and Indigenous health at the University of Toronto’s Temerty Faculty of Medicine, calls surveillance testing an “early-warning system” for outbreaks. (File photo)

“[It’s] outbreak control,” she said. “If someone has been exposed, then you want to survey the people that they’re exposed to, especially in a remote community.”

She pointed to a testing program in Toronto’s Thorncliffe Park Public School late last year that revealed a four per cent infection rate among staff and students.

Banerji said testing can’t replace other types of public-health directives, such as social distancing and contract tracing, but supplements them. That’s because tests can be inaccurate.

That’s why, back in Komakjuak’s household, everybody stayed in isolation together, even though they continued to test and those tests continued to come back negative.

She credits a mixture of faith and sanitation for that.

“We prayed together every night, every day. We disinfected everything. We made sure all the kids wash their hands,” said Komakjuak.

As for going through lockdown again, Komakjuak remains in high spirits. She said it’s not so bad, staying home with the family, and they all look forward to daily radio updates from Mayor Joe Savikataaq Jr., who she refers to as “Jo-Jo.”

Komakjuak said Arviat is strong, and can beat COVID-19.