‘There’s no guide or manual on how to deal with a death in the family that’s out of the community,’ says granddaughter of Alexina Makkik 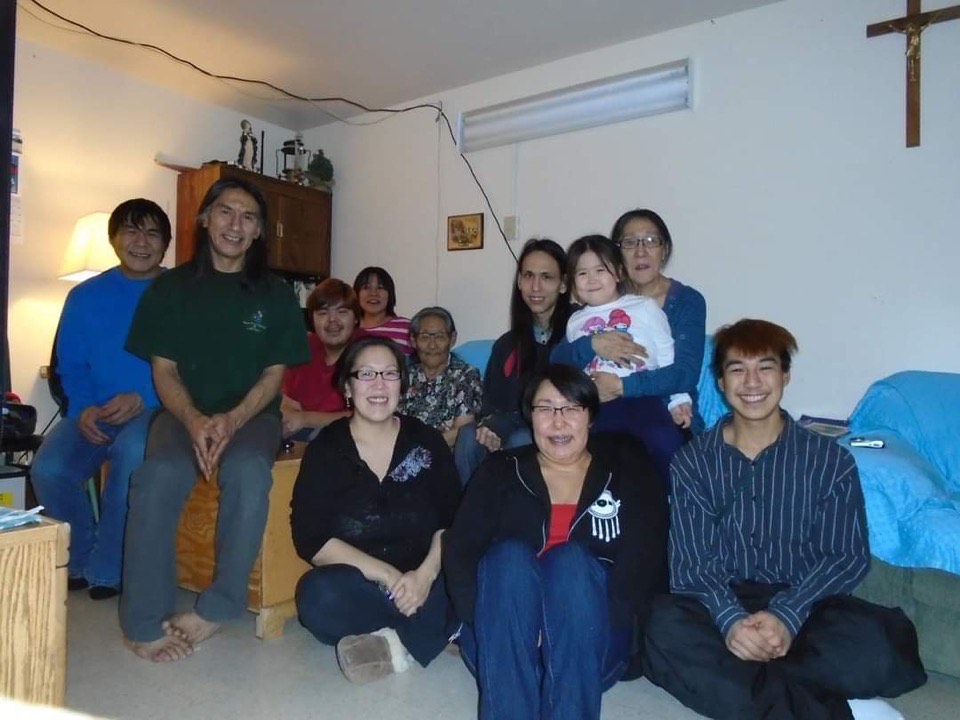 The family of Alexina Makkik, seen in the centre of this family photo, filed a complaint with Nunavut’s Health Department over their ordeal sorting through a complicated and bureaucratic system before the Makkik family could finally bury their grandmother who died in October. (Photo courtesy of Romani Makkik)

It shouldn’t have taken 38 days for the family of Alexina Makkik to bury their grandmother, says Alexina’s granddaughter Romani Makkik.

Instead of being able to promptly hold a funeral, the family from Igloolik struggled through a complicated system to find and transport the woman’s remains from Iqaluit, all while in grief.

“There’s no guide or manual on how to deal with a death in the family that’s out of the community,” Romani said.

This process led the Makkik family to write a complaint to the Department of Health’s Office of Patient Relations that details the long and agonizing path it took for the family to finally bury their grandmother.

Alexina died on Oct. 25 at the age of 86 at the Qikiqtani General Hospital. She lived in Igloolik but was flown to Iqaluit for care because of her deteriorating dementia.

The night Alexina died, the family was in a state of loss and left the hospital without asking for information about what to do with her body or how to get a death certificate, Romani said, adding the hospital staff did not offer to help the family either.

After Alexina’s death, the family struggled to find their grandmother’s remains and transport them back to Igloolik.

Romani’s mother and uncle received forms from the Hamlet of Igloolik that they thought were for bringing their grandmother home. Those forms were passed to the Qikiqtani Inuit Association to handle, although it turns out they were applications for financial assistance to travel to a funeral.

That distinction was not made clear to the family, Romani said.

In early November Romani started calling Qikiqtani Funeral Services, an Iqaluit organization that handles paperwork and arranges transportation of the bodies of people whose death occurred away from their home community, on the advice of a friend. Romani said her calls were not answered.

By Nov. 12, the family contacted their MLA, Joanna Quassa, as well as the Igloolik senior administrative officer, Greg Morash, and Canadian North.

None of them was able to help, she said.

Progress began on Nov. 19, when Romani was able to get ahold of a representative of Qikiqtani Funeral Services.

Romani said she was told her grandmother had been mistakenly registered as an Iqaluit resident and was waiting for a burial date. Once that was cleared up, the wheels were in motion to bring Alexina home, but it would still take more than a week to get it done.

That’s because of hiccups with communicating with Canadian North, according to Romani.

Canadian North spokesperson Kevin Kablutsiak said the airline received an email about moving Alexina’s remains on Nov. 22, but missed it due to short staffing and dozens of other cargo requests that day.

When Canadian North received a follow-up email on Nov. 25, the company secured space on a Nov. 27 flight but the remains were not delivered for the flight. Kablutsiak said Alexina’s remains were then scheduled for the next available flight.

Alexina was finally buried in Igloolik on Dec. 2.

When Nunatsiaq News asked the Nunavut Health Department about the Makkik family’s complaint, spokesperson Chris Puglia said the department does not comment on individual cases.

Regardless of whose responsibility it was to locate and transport Alexina’s remains, it shouldn’t have been so hard to get help, said Romani.

“Nobody took the initiative to walk [the family] through the process of what they needed to do to get the remains of my grandmother home,” she said.

The Department of Health’s medical travel policy states that the department will transport the remains of a Nunavut resident who dies during medical travel back to their home community.

In 2016, then-minister of health George Hickes acknowledged in the legislative assembly that the system to repatriate remains is overly complicated, and he committed his department to publishing an information sheet the public can use for guidance.

The Department of Health did not respond to Nunatsiaq News’s question on whether that info sheet was ever published.

Romani says other families have approached the Makkiks to tell them they had gone through similar problems, and she does not want to see another Inuit family go through what hers has.

By sharing her family’s struggle, Romani said she hopes that system can start to change.

“So we can amplify our Inuit wants and desires for change within systems, institutions and policies so that they are more reflective of our lived reality,” she said.

Correction: This story has been updated to reflect the fact that Canadian North received a follow-up email on Nov. 25