“Effective, economic mitigation measures must be put in place so that Nunavummiut do not bear the costs,” says Nunavut minister 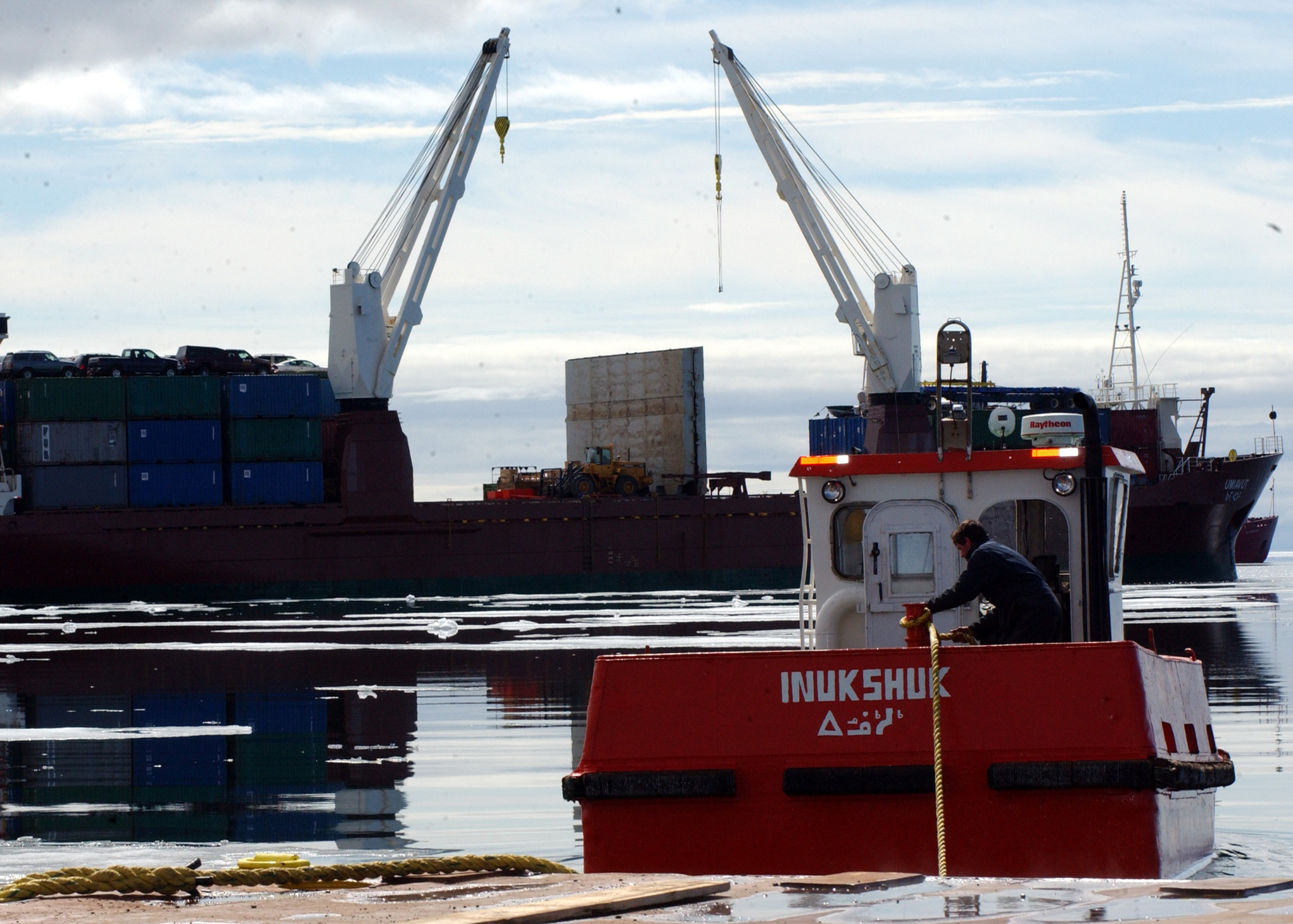 A crew member of a tugboat that travels with an NEAS sealift vessel ties up to a barge in Frobisher Bay, near Iqaluit. (File photo)

A subcommittee of the International Maritime Organization, after a meeting in London last week, is proposing a ban on heavy fuel oils in Arctic waters—with a proposed provision that could exempt Canadian Arctic sealift vessels from the new rules until July 1, 2029.

That appears to satisfy a demand from Canada that the IMO, the United Nations body that sets international standards for the global shipping industry, adopt a phased approach to the elimination of HFOs in Arctic regions.

In a post published on her Cryopolitics blog, Mia Bennett, a geography professor at the University of Hong Kong, said on the weekend that an IMO working group recommended in a report to the organization’s environmental subcommittee last week that HFOs be banned in the Arctic by July 1, 2024.

But at the same time, the group recommended exemptions that appear to benefit sealift operators that serve Nunavut and Nunavik.

Under one provision, an Arctic coastal state can exempt a vessel flying its flag that operates in waters subject to their sovereignty or jurisdiction until July 1, 2029.

That would likely cover cargo ships operated by partially Inuit-owned firms like Nunavut Eastern Arctic Shipping, and Nunavut Sealink and Supply Inc., which conduct the annual summer sealift, as well as the Labrador-owned Woodward Group of Companies, which supplies fuel to many communities.

Another provision would exempt vessels used for search and rescue, or for oil spill preparedness and response, the IMO’s summary of the meeting states.

And some vessels meeting certain construction standards for fuel tank protection would also be exempted until July 1, 2029, the IMO summary says.

That move seems to satisfy the concerns of the Canadian government, which, until recently, has withheld support for a total HFO ban in the Arctic.

Blog: @IMOHQ deliberations can be like watching paint dry. But yesterday I watched history dramatically unfold as a ban on heavy fuel oil in #Arctic #shipping moved ahead (starting 1 July 2024).

That, in turn, would increase the cost of numerous goods and services in Nunavut, including food, furniture, hunting supplies, medical supplies and construction materials, Transport Canada said.

Those extra costs would occur in addition to other costs created by a new Transport Canada regulation mandating the use of low-sulphur fuels, which came into effect this past Jan. 1.

The combined impact of the low-sulphur regulation plus a future HFO ban could cost the average Nunavut household up to $1,400 a year.

And those higher costs would be borne disproportionately by Inuit and other Indigenous Arctic residents, who have lower average incomes than non-Indigenous people, the Transport Canada study found.

So Canada wants extra time to “help balance the environmental benefits with the economic realities of northern, Indigenous and Inuit communities,” Garneau and Champagne said in their joint statement.

The Government of Nunavut also fears the economic consequences of an HFO ban that’s imposed too quickly.

“If it is not managed properly, the heavy fuel oil ban will have a negative impact on the lives and livelihoods of all Nunavummiut,” David Akeeagok, the Nunavut minister of economic development and transport, said in a statement in the legislature on Feb. 21.

“The cost of food, housing, and infrastructure can be expected to increase, and the economic viability of important development projects and activities will erode,” Akeeagok said.

On that point, Akeeagok said he communicated this to Garneau at a meeting earlier this month, urging him to bring in measures that ensure Nunavut isn’t hurt by an HFO ban.

Akeeagok also said he’s pleased that Nunavut Tunngavik Inc. and the Inuit Circumpolar Council have taken a position similar to the GN’s, referring to a statement that NTI and ICC announced on Feb. 18.

NTI and ICC have supported an HFO ban in the Arctic since at least 2018, and NTI delegates passed a resolution to that effect in in October 2018.

“Leaving our marine environment unprotected is not an option, nor is offloading costs for environmental protection to the communities,” said last week’s statement from ICC and NTI.

But in a news release issued on Feb. 25, the ICC said they’re uncomfortable with the proposed exemptions the IMO is now looking at.

In the release, they say they find “encouragement” in the proposed HFO restrictions, but they don’t like the exemptions.

“However, we remain deeply concerned about the potential negative impacts that “exemptions” will continue to put our communities and ways of life at risk,” Lisa Koperqualuk, the vice-president of the Inuit Circumpolar Council-Canada said in the release

“We will continue advocating for a full ban to phase-out use of HFOs and ultimately protect our communities and environment,” Koperqualuk said, a position that puts ICC onside with a variety of international environmental organizations.

She also said ICC doesn’t like the cost issue being used to resist a ban on HFOs.

“We are living in an age of transformation in the Arctic and we must not hold Indigenous communities hostage by threatening increased costs,” Koperqualuk said.

HFO is a category of fuel oils, often called bunker oil, that are a thick, tar-like substance that’s difficult to clean up if spilled into cold waters, and when burned, HFO produces particles of black soot, or black carbon.

When the black carbon particles settle onto ice or snow, they decrease its ability to reflect sunlight and increase the extent to which it absorbs heat, compounding the effects of climate change.

For that reason, 18 international environmental organizations, through a coalition called the Clean Arctic Alliance, have for years campaigned for a ban on HFOs.

And they don’t like the exemptions either. The Clean Arctic Alliance fired off a statement last week saying they denounce exemptions that would allow certain vessels to use HFOs until 2029, which they refer to as “loopholes.”

“If HFO continues to be burned in the Arctic until June 2029, Arctic coastal communities will be subjected to the risk of HFO spills and higher levels of air pollution,” Sian Prior, a Clean Arctic Alliance spokesperson, said in a statement last Friday.

The IMO marine environment protection committee will likely discuss the Arctic HFO ban proposal at its meeting this October. If adopted, the new regularions could come into effect by the spring of 2021, and become part of an international set of rules called the International Convention for the Prevention of Pollution from Ships, also known as “MARPOL.”

Under MARPOL, HFOs have been banned in the Antarctic since 2010.