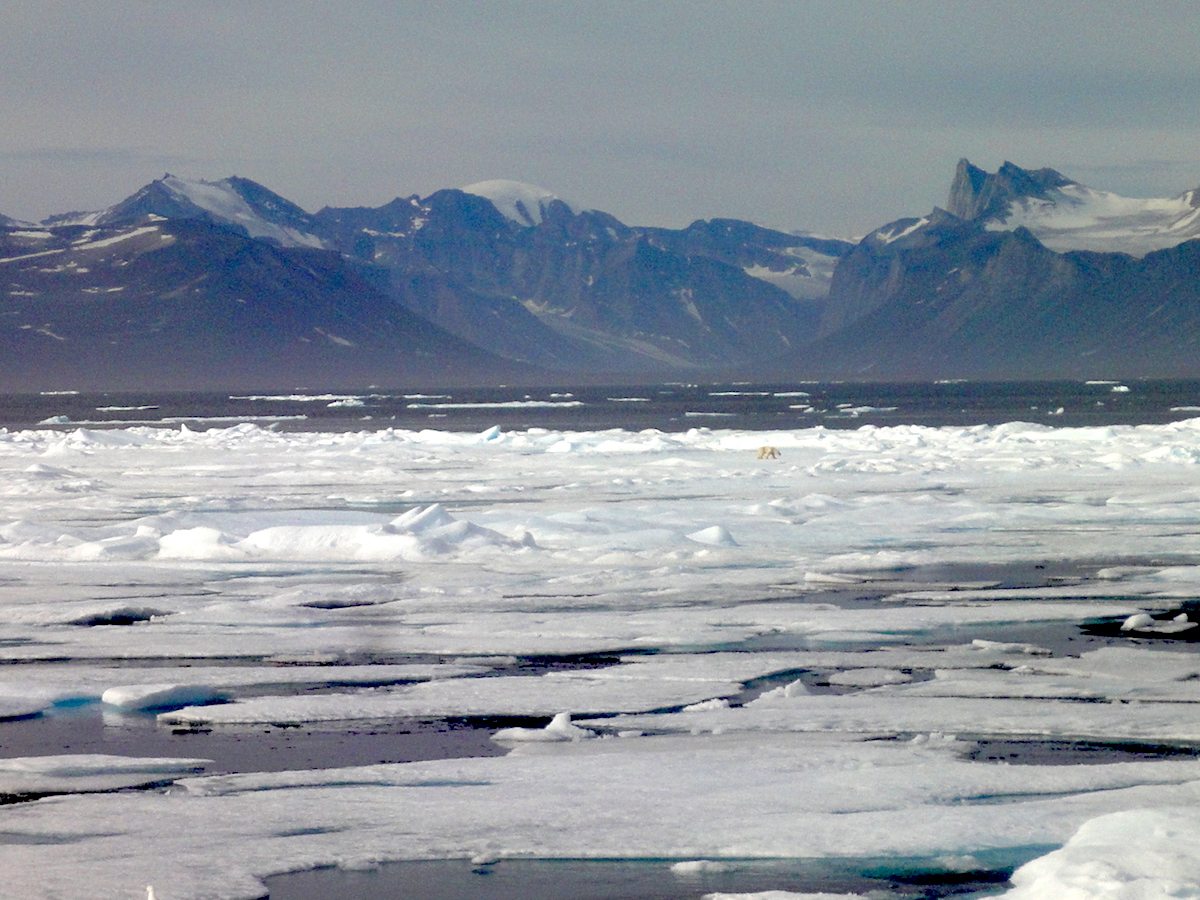 It remains to be seen what 2020 has in store for Arctic oil and gas development, but a few hints may be found in events that have taken place over the past year. In August, the Nunavut Impact Review Board recommended the federal government extend its moratorium on development in Baffin Bay, seen here, and Davis Strait. (Photo by Jane George)

As 2019 comes to a close, there’s one year remaining of Canada’s five-year moratorium on Arctic offshore oil and gas exploration.

The 2016 agreement was jointly signed by Prime Minister Justin Trudeau and former president of the United States Barack Obama, prohibiting any new exploration on the Arctic Ocean’s sea floor.

The moratorium will be reviewed in 2021.

But the past year has seen some big developments in Arctic offshore activity, in boardrooms rather than barrels.

After the moratorium was established in 2016, the federal government spent a year talking to northern leaders, Inuit and territorial governments, who cried foul over its unilateral imposition.

In Canada’s eastern Arctic, the Nunavut Impact Review Board wrapped up a tour of the Qikiqtani region in November, sharing its completed assessment of oil and gas development in Baffin Bay and Davis Strait.

In August, the board submitted its report and recommendation to Carolyn Bennett, minister of Crown-Indigenous relations and northern affairs, recommending the current moratorium remain in place for at least another decade.

The QIA contributed to the assessment, developing UQAUSIRISIMAJAVUT: What we have said.

The study details what needs to be done before the moratorium is lifted, including identifying no-go zones and seasonal restrictions. The report also uses Inuit Qaujimajatuqangit, or traditional knowledge, to identify potential negative impacts.

And it proposes measures such as a compensation process for country food that is no longer available, should wildlife be adversely affected by oil and gas development.

In the western Arctic, the Beaufort Regional Strategic Environmental Assessment is underway, led by the Inuvialuit Regional Corporation and Game Council, in partnership with Crown-Indigenous Relations and Northern Affairs Canada.

Duane Smith, chair of the Inuvialuit Regional Corporation, said his organization has put a particular focus on traditional knowledge in the forthcoming assessment.

“It’s important to me that the individual community perspective is reflected in this analysis. We depend on that ecosystem sustainability to provide a livelihood for us,” Smith said.

He said further study is needed in this area, and he expects that work to continue well after the moratorium is lifted. He said the Inuvialuit Regional Corp. planned to work alongside the federal government in this effort.

But, he added, “I still think they didn’t have to put a moratorium in place. I think they could have conducted both.”

Talks between the federal government and industry were also held after the moratorium went into place.

“Our consultations with territorial and Indigenous governments, as well as with oil and gas companies, have helped guide our path forward,” Amarjeet Sohi, federal minister of Natural Resources, said in an Oct. 4, 2018, news release on the government’s plans for future oil and gas development.

In March of this year, the federal government made good on its pledge under that plan and refunded all deposits for exploration licences in the Arctic Ocean.

Some of these refunds went to oil companies that had already suspended their Arctic exploration projects, and had licenses that would soon have expired.

Companies put down these deposits as a security while they search for oil and gas. The deposit is 25 per cent of their total work bid, and is refunded to the company at a rate of $1 for every $4 spent on the project.

An exploration licence has a lifespan of nine years, within which the company can complete the necessary work to recoup that deposit.

Following that, if there is a proven store of hydrocarbons, the company can apply for a significant discovery licence.

There are 69 significant discovery licences listed in the federal government’s 2018 Northern Oil and Gas Report, across the Beaufort Sea and throughout the eastern Arctic.

But significant discovery licences don’t have an expiration date—a point of contention for Smith.

He has previously voiced concern over the lack of action on the part of the government in pushing production on significant discovery licences.

“You allow these companies to hold the country hostage when they’re sitting on Canada’s resources and not doing anything to develop it or the economy, or contributing to Canada as a whole,” Smith told Nunatsiaq News.

The reality, he said, is a glut of oil and gas elsewhere, and the remoteness and lack of infrastructure in the Arctic, is making it costly to explore.

“You’ve got all these things lined up that are not helpful to the economy and the region,” he said.

Among the exploration licences, the two highest work bids were those of Imperial Oil Resources Limited: EL-477 and EL-476. Both sit about 180 kilometres northwest of Tuktoyaktuk in the Beaufort Sea.

Imperial Oil announced that it was suspending its joint venture offshore program in the Beaufort in 2015, so those two licences wouldn’t be seeing any action. EL-476 was set to expire on July 31, 2019.

As well, the federal government passed Bill C-88, amending the Canada Petroleum Resources Act. The amendment gave the prime minister and cabinet the power to suspend work on all offshore oil and gas licences in the Canadian Arctic.

The government used that new power on July 29, freezing the terms of all existing licences two days before Imperial’s EL-476 expired.

Imperial did not provide comment on Bill C-88, telling Nunatsiaq News “it is not our practice to comment on the details of our commercial arrangements.”

Before Bill C-88 passed, it caught the attention of at least one environmental organization.

On May 16, the World Wildlife Fund Canada submitted a letter to MaryAnn Mihychuk, chair of the federal standing committee on Indigenous and northern affairs. The letter, published at Our Commons, questions the timing and purpose of the amendment.

“Is the government intending to use the expanded prohibition powers under Bill C-88 to preserve the rights and extend the exploration licence terms of oil and gas operators in the Beaufort Sea region who have failed to do the work required by the terms of their exploration licences?”

WWF-Canada asked why the federal government is preserving the rights of licence holders, rather than allowing the licences to expire and collecting the forfeited deposits.

Kenny, the spokesperson for Northern Affairs Canada, told Nunatsiaq News that “work bid deposits were remitted to existing exploration licence holders in the Arctic offshore to minimize their financial exposure while the order prohibiting oil and gas activities in Canada’s Arctic waters remains in force.”

Since the order prohibits licence holders from undertaking any work in relation to their licence, he said it nullifies the requirement for a work bid deposit.

WWF-Canada argued otherwise, saying that licence holders are benefiting since they keep their deposits, despite not completing the work they committed to.

“As companies will avoid substantial financial losses, one could argue that, in effect, this is a form of indirect subsidy to the industry, from a government that has committed itself to eliminating all ‘inefficient’ oil and gas subsidies,” WWF-Canada’s letter states.

After Dec. 31, 2021, licence holders in the Beaufort Sea will have the option to pay their deposit again, or surrender their licence, Kenny confirmed.

“After the order expires, existing exploration licence holders will be provided 90 days to re-submit the balance of the work bid deposit in order to continue to undertake any oil and gas activities,” he said.

And, as the order freezes the terms of the licence, the remaining time left on that licence would be applied back to it.

“If a work bid deposit is not re-submitted within 90 days, the lands associated with the licence will be cancelled,” he said.

Before the government enacted its prohibition order, it proposed another move to preserve licence holders’ interests.

A May 11 entry in the Canada Gazette announced the federal government’s intent to issue new exploration licences that would replace previously held ones, to make up for time lost by licence holders since the moratorium was put in place.

The Canadian Association of Petroleum Producers has said the moratorium created uncertainty for the industry, despite the fact that existing licences were explicitly excluded from the moratorium. CAPP did not respond to Nunatsiaq News’ request for comment on this story.

The environmental organization also pointed out that extensions to exploration licences are prohibited under the Canada Petroleum Resources Act.

“If the government is using Bill C-88 as a way to preserve rights and extend licence terms, we believe this is an abuse of the expanded prohibition authority,” said WWF-Canada.

“It sets a dangerous precedent and could potentially be used again by future governments whenever oil and gas industry operators bid on a license, do no work on it within the required time frame, then wish to extend their license terms and preserve their rights to what is a public resource.”

Extending the terms of exploration licences, WWF-Canada said, is deeply concerning when we remain unprepared for the risks of offshore oil and gas activities.

As of Dec. 2, Kenny said the new exploration licences had not been issued. And as long as the moratorium is in effect, he said there is no plan to do so.

It remains to be seen whether, one year from now, the federal government will extend the moratorium, and if it’s lifted, what this will mean for the future of Arctic offshore oil and gas development.