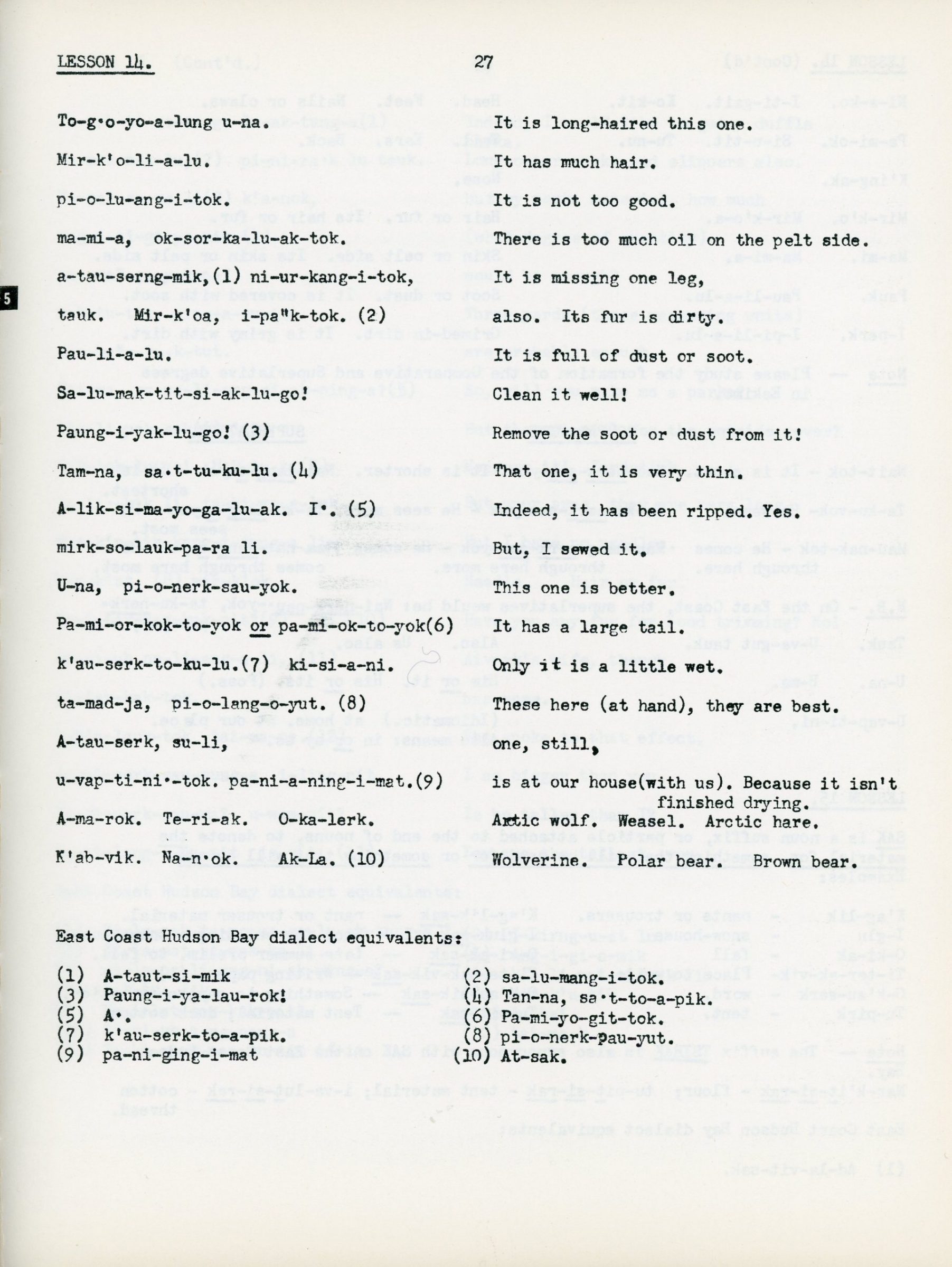 An example of a lesson included in Alex Spalding’s book, A Grammar of the East and West Coasts of Hudson Bay. (Image courtesy of the Kenn Harper Collection)

In praise of Spalding’s grammar

Over half a century ago, when I was a very young man, I embarked on a study of the Inuktitut language.

I was a teacher in Padloping Island, the most isolated community in Canada’s eastern Arctic. There was a school with two attached apartments, one for the teacher (that was me) and one for the school janitor and electrical plant operator (that was Jacopie Koksiak and his family). And there were eight separate houses, occupied by Inuit families. The total Inuit population was 34.

Learning aids for Inuktitut were few in those days. There was a tape-recorded course on reel-to-reel tapes with printed guides, prepared under the direction of Raymond Gagné, a linguist with the federal government, and Elijah Erkloo in Ottawa. There were Bibles and prayer books which I found unhelpful as early-stage learning aids.

And there was Spalding. Thank God for Alex Spalding.

He had written a grammar book with the unwieldy title A Grammar of the East and West Coasts of Hudson Bay. It had been published by the Department of Northern Affairs and National Resources in Ottawa in 1960. This book became my “Bible” for learning Inuktitut.

Spalding arrived in Repulse Bay (now Naujaat) in 1946 as a clerk for the Hudson’s Bay Company. He learned Inuktitut quickly and well.  From almost the beginning of his time in the North, he worked on his grammar. He became especially close friends with the Kusugak family who, he claims, treated him as a son. In 1979, he and Thomas Kusugak published a volume of stories, Eight Eskimo Myths.

There is a backstory to Spalding’s grammar. The book had a long gestation. He completed the first draft in the late 1940s. The HBC’s Fur Trade Department, his employer, was impressed and intended to publish the volume for distribution to company staff in the Arctic. To that end, they sent a copy to their trader Leo Manning, who was stationed at Coppermine (now Kugluktuk) from 1948 to 1952, and he added Inuinnaqtun equivalents to Spalding’s eastern vocabulary. However, the HBC changed its plans and decided, for reasons unknown, not to include Manning’s contributions. The work was returned to Spalding in 1955 for revision.

Spalding must have been disappointed with HBC’s decision to not include Manning’s work. He revered Manning and was totally in awe of the man’s facility with Inuktitut. When his revisions were complete, he dedicated his volume “To Iyiki,” Manning’s Inuktitut name, whom he described as a man “Who pretended little and knew much, Who asked for little and gave much.”

The book was meant for “the young [HBC] clerk coming into the country.” It contains 71 lessons and takes the young clerk through the annual events he might be expected to encounter from his arrival at a post at ship-time until his departure on the following year’s ship. 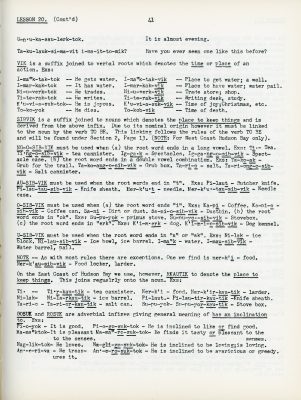 Lessons in Alex Spalding’s book, A Grammar of the East and West Coasts of Hudson Bay, were the go-to resource for many people learning Inuktitut. (Image courtesy of the Kenn Harper Collection)

By today’s standards — perhaps even by the standards of 1967 when I discovered it — it was an unusual document. The orthography was atrocious. This was before linguist Mick Mallon began teaching Inuktitut to non-Inuit students; in my opinion the most valuable part of Mallon’s work at that time was his use of a standard alphabetic orthography which did not rely on diacritics or unusual symbols. It would not be until 1976 that a phonemically-based Inuktitut orthography would be developed and ratified by Inuit Tapirisat of Canada. Before that, in the 1960s, under the afore-mentioned Gagné, the federal government had tinkered with the possibility of a roman orthography to replace syllabics, but its efforts were poorly promoted in the North and had little effect.

So Spalding worked in an orthographic void. He had to come up with his own orthography. It had to use letters consistently — unlike the missionary orthographies which had preceded it. In fact, in his preface, he says, “The greatest asset of this orthographical system, I believe, is its consistency.”

I devoured Spalding’s book despite its atrocious orthography and its vocabulary which, to me, was largely impractical. It wasn’t the type of lexicon I needed in my work with students in the school or in social interactions with their parents and the community at large. In fact, the vocabulary and the dialogues were “trader talk.”

I had little need to know how to say “These small pieces of lumber, pick them up! Carry them over your shoulder!” (K’e-yu-ak-ju-in u-ko-a ti-gu-lu-git! Erk-suk-lu-git!”) Or “While we were building a snowhouse, my little son caught a rabbit.” (“i-glu-li-o-lerk-tid-lu-ta erng-ni-ku-lu-ga o-ka-li-ak-juk-tok.”). Today’s social justice warriors would probably call the book’s vocabulary demeaning and colonial.

But it wasn’t the vocabulary that interested me so much. It was Spalding’s explanation of the structure of the language that I found helpful. It was much more organized than missionary-written works that I had perused. And he had a marvelous way of explaining the intricacies of the “infixes” — Mick Mallon later called them “chunks” — that allow the Inuktitut language to be so flexible and words to be so long.

Although Spalding’s work was filled with difficult orthography and its fair share of errors, still, it was a wonderful learning aid, better than anything else available at the time. And he built on it. It served as the basis for his later work Salliq/An Eskimo Grammar (1969), based on the dialect spoken at Coral Harbour, the Salliq of the title, a volume he wrote with the assistance of Albert Nassiq. He also published Learning to Speak Inuktitut and Learning to Speak Inuktitut/A Grammar of North Baffin Dialects. In addition he published a memoir of his first two years in the Arctic, at Repulse Bay, as Aivilik Adventure.

Alex Spalding left the HBC in 1955 after serving in the Kivalliq and the east coast of Hudson Bay at Great Whale River. He died in Toronto in 2002 at the age of 78. Mary Panigusiq Cousins once told me that, on first hearing him without seeing him, she could not tell whether she was listening to an Inuk or a Qallunaaq. This is high praise from Mary, who replaced Spalding as an interpreter on the government medical ship, C. D. Howe.

It’s hard to get today, but I would still recommend Spalding’s first grammar as a learning aid to any student of Inuktitut.