In Nunavik, 31 people have died by suicide so far this year 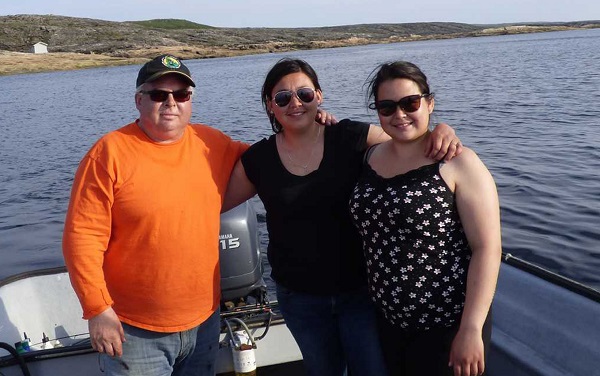 From left: Bobby May with his daughters, Leah and Natalie, are seen boating downriver from Kuujjuaq last August. Natalie died by suicide Oct. 6. (PHOTO BY GLEN MAY)

KUUJJUAQ—Nov. 25 marked 50 days since Natalie Ittulak May, a 22-year-old woman from Kuujjuaq, took her own life.

Her father, Bobby May, makes quiet note of it, seated in his kitchen with a single tear moving down his cheek.

“I went through shock for the first 10 days,” he recalls. “And then it was anger—I was mad at her for doing that to us.”

May said he drank for a few days to dull the pain as grief set in.

This week is the first time that he feels a little more like himself, but he still can’t accept that Natalie is gone, May says. He wants to talk about his daughter’s death and the wave of suicides that has taken the lives of an alarming number of young Nunavimmiut.

Regional organizations told Quebec’s Viens commission last week that so far in 2018, 31 Nunavimmiut have died by suicide, the highest number ever recorded in the region in a given year.

“She was always happy and cheery, but I think she was hiding behind that,” May said, describing his late daughter. “She struggled with her mental health.”

Natalie’s struggles weren’t unknown. As a teen, May opted to move her south to Ottawa for a year to live with her aunt, Mary Simon, where she could have access to regular counselling.

She returned a year later, a little more talkative, outgoing and positive, her father said.

Over the last few years, Natalie worked for Halutik Fuel in Kuujjuaq, and in recent months she had moved in with her with older sister.

Natalie would drop by to visit her dad, but they talked more often on Facebook Messenger. It was on social media, May now recognizes, that Natalie dropped hints about how she was really feeling.

The young woman had also recently separated from her long-time boyfriend.

May knows his daughter had experienced suicidal ideation in the months before she died and spent time in the hospital.

“The problem is here [in Kuujjuaq], if you’re suicidal, police will sometimes take you to the hospital where you’re kept under observation,” May said.

“They keep you a few days, and then the doctor will assess if you’re OK to leave. And that’s it.”

In Natalie’s case, there was no follow up, he said. She ended her life early Oct. 6, during a bad storm. This photo was taken three weeks before Natalie May died last month. (PHOTO COURTESY OF MAY FAMILY)

In the aftermath of his daughter’s death, May and his sister Mary Simon created a petition calling on the federal and provincial governments to declare the incidence of suicide in northern Quebec a national crisis, and to appoint a special representative to help implement services in response.

May originally sought to collect about 5,000 signatures, but this week, the petition has now garnered over 17,000.

Simon, who served as an Arctic advisor to the federal government, has an upcoming meeting with Indigenous Services Minister Jane Philpott, in which she plans to discuss it.

Both the federal and provincial government have acknowledged the latest wave of suicides in Nunavik, and pledged their support as needed.

But May wants the petition to prompt better diagnostic, treatment and counselling programs, including infrastructure, for Nunavimmiut at risk of suicide, especially Inuit youth.

He believes that follow up with health and social services could have made a difference in Natalie’s outcome.

May said the few front-line workers based in Kuujjuaq are already overwhelmed with their workloads.

Following a cluster of suicides in Puvirnituq this past fall, the school board, Kativik Ilisarniliriq, convened an emergency meeting involving community and regional organizations, with the goal of better mobilizing local resources in times of crisis.

Its aim is to better track who and what presents a risk, while ensuring crisis intervention and follow up services.

The committee has sought a made-in-Nunavik approach to prevention, one that is led and delivered by Inuit.

May welcomes outside resources; he acknowledges the importance of offering culturally relevant services, but he doesn’t believe those services can only be delivered by Inuit. With the right infrastructure this could happen through videoconferencing, he noted.

“I think the priority is to get [more services] in place,” he said.

“There are too many meetings and not enough action,” May said. “I know people are working hard on it. But there’s nothing really taking solid shape.”

Since Natalie died in October, May said there have been a handful of other suicides throughout the region.