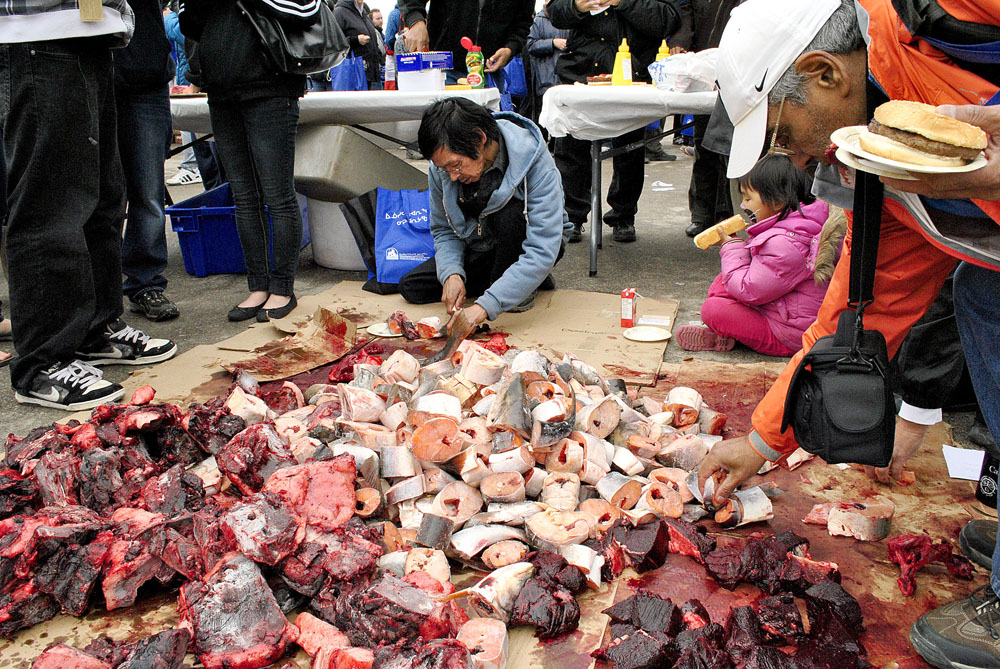 “Right now the current existing legislative and regulatory framework is an impediment to harvesting, sharing and selling country food,” said Hilda Broomfield-Letemplier of Nunatsiavut, a member of the National Indigenous Economic Development Board, a federally appointed body set up to advise the federal government.

The board’s report on northern sustainable food systems says that to ease that impediment, the federal government should create a new law that would be called the Wild Foods Inspection Act, along with country and traditional food marketing boards.

“Specific food safety regulations are required to guide the sale of country and traditional foods, both within the North and as export commodities to the rest of Canada and internationally,” the report said.

Such regulations could be created under the proposed Wild Foods Inspection Act, with the guidance of an Indigenous advisory board and under the jurisdiction of the Canadian Food Inspection Agency.

“It’s like anywhere. You have to have food inspection,” Broomfield-Letemplier said.

And to help create those regulations, the federal government could look at food safety guidelines that the Government of Nunavut developed in 2014 for country food served at government facilities, such as health centres, jails, elders centres and schools, she said.

Other recommendations in the report urge more support for harvesters and improved subsidies under Nutrition North Canada to help pay for the transportation of country foods.

On that last point, Broomfield-Letemplier said she supports changes to Nutrition North that the federal government announced this past September.

Though they haven’t released any details explaining how it will work, the federal government said they’ll spend $62.6 million over five years, starting April 1, 2019, to help country food harvesters.

“The changes announced for Nutrition North are a good start, in particular for the hunter support program,” Broomfield-Letemplier said.

As many others have found, the report said food harvesting is becoming more difficult and expensive for people living in small Indigenous communities.

“With more working in the wage economy, the tension has become how to find the time and money to continue to harvest food, while still doing so in a way as to enable people to continue to share it,” the report said.

At the same time, Broomfield-Letemplier said she shares the concerns of those who worry about the health of northern caribou herds.

In the Nunavut legislature last week, Cathy Towtongie, the MLA for Rankin Inlet North-Chesterfield Inlet, said she’s worried that if the federal government creates financial incentives that could encourage Kivalliq hunters to sell caribou meat to people in other regions, the herds in that region might suffer.

But Broomfield-Letemplier said her board looked at that problem before writing their report.

“We talked about caribou. They’re not healthy, they’re not in great numbers. Those kinds of things would only be looked at once the caribou are back and they’re healthy, in great numbers, and if the Indigenous people are able to catch their own caribou. But right now it’s difficult,” she said.

Another measure that the report recommends is federal help for people living in remote communities who want to open retail stores to compete with existing companies.

“In some remote communities, there is only one retail establishment to purchase market foods and other goods. Often these retail establishments are southern-owned, with no local pricing competition and decision-making occurring without local input or representation,” the report said.

To put more money into the pockets of lower income people, the report also recommends the creation of a new social benefit it calls the “Northern Basic Income Allowance.”

And they also recommend indexing northern income tax rates to help people cope with the high cost of living in the North.

These social benefits are required because Inuit and other northern communities are disproportionately hurt by the disparities in income created when high-paying jobs are more often filled by labour sourced in the south.

“The greatest demonstration of this is in Nunavut, where the average income for the non-Indigenous population is greater than four times that of the Inuit population,” the report said.

“Income inequality in Northern communities can create local food deserts, where healthy food is available, but unaffordable to low-income people.”

And those low incomes can also make it more difficult for people to hunt for country food.

For the purposes of the report, “North” is defined as the three northern territories, plus the four regions of Inuit Nunangat: Nunavut, Nunavik, Nunatsiavut and the Inuvialuit settlement region.

Chaired by Chief Clarence Louie of British Columbia, the National Indigenous Economic Development Board is set up to advise the federal government on economic issues affecting Indigenous people.

The report on northern country food was prepared after a roundtable in Whitehorse that the board conducted in June 2018.

NIEDB—Recommendations on … by on Scribd