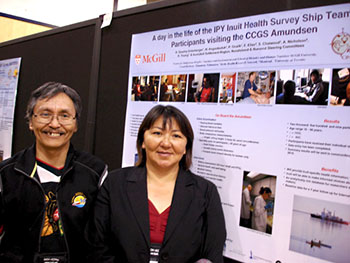 Paul Onalik of Kimmirut and Hannah Angoootealuk stand in front of a poster explaining the Qanuippitali Inuit health survey, which they presented at this week’s International Congress of Circumpolar Health in Yellowknife. The two traveled throughout Nunavut on board the Amundsen when they worked on the 2007-08 Qanuippitali Inuit Health Survey. (PHOTO BY JANE GEORGE) 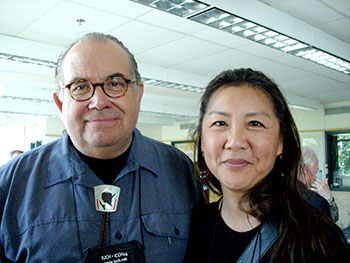 Dr. Ted Mala, the director of healing at the Anchorage Native Primary Care Centre, and Dr. Marjorie Mau from the department of native Hawaiian health at the University of Manoa in Hawaii were among the indigenous medical researchers attending the recent International Congress on Circumpolar Health in Yellowknife. (PHOTO BY JANE GEORGE)

YELLOWKNIFE — Faced with fall-out from colonialism, climate change and a growing global economic crisis, indigenous health researchers say the International Union for Circumpolar Health should pay more attention to the needs and concerns of indigenous people in the region.

“The health status of indigenous peoples in many circumpolar countries remains far below that of their fellow citizens despite years of research and health care advancements,” says a July 15 statement from the indigenous peoples working group, which met last week during the International Congress on Circumplar Health in Yellowknife.

Its members noted that numerous presentations at the conference confirmed that climate change is further damaging the health and lifestyle of the indigenous peoples of the North and they want to see more accessible and culturally appropriate health services.

They asked the other members of the national health societies that belong to the circumpolar health union to develop ethical principles and guidelines so indigenous peoples have more say over research.

They also asked for a annual “report card” on the health of indigenous peoples in the circumpolar world, which would give an update on living and environmental conditions, health status and delivery of health services.

They also want to see the re-establishment of the Arctic desk at the World Health Organization.