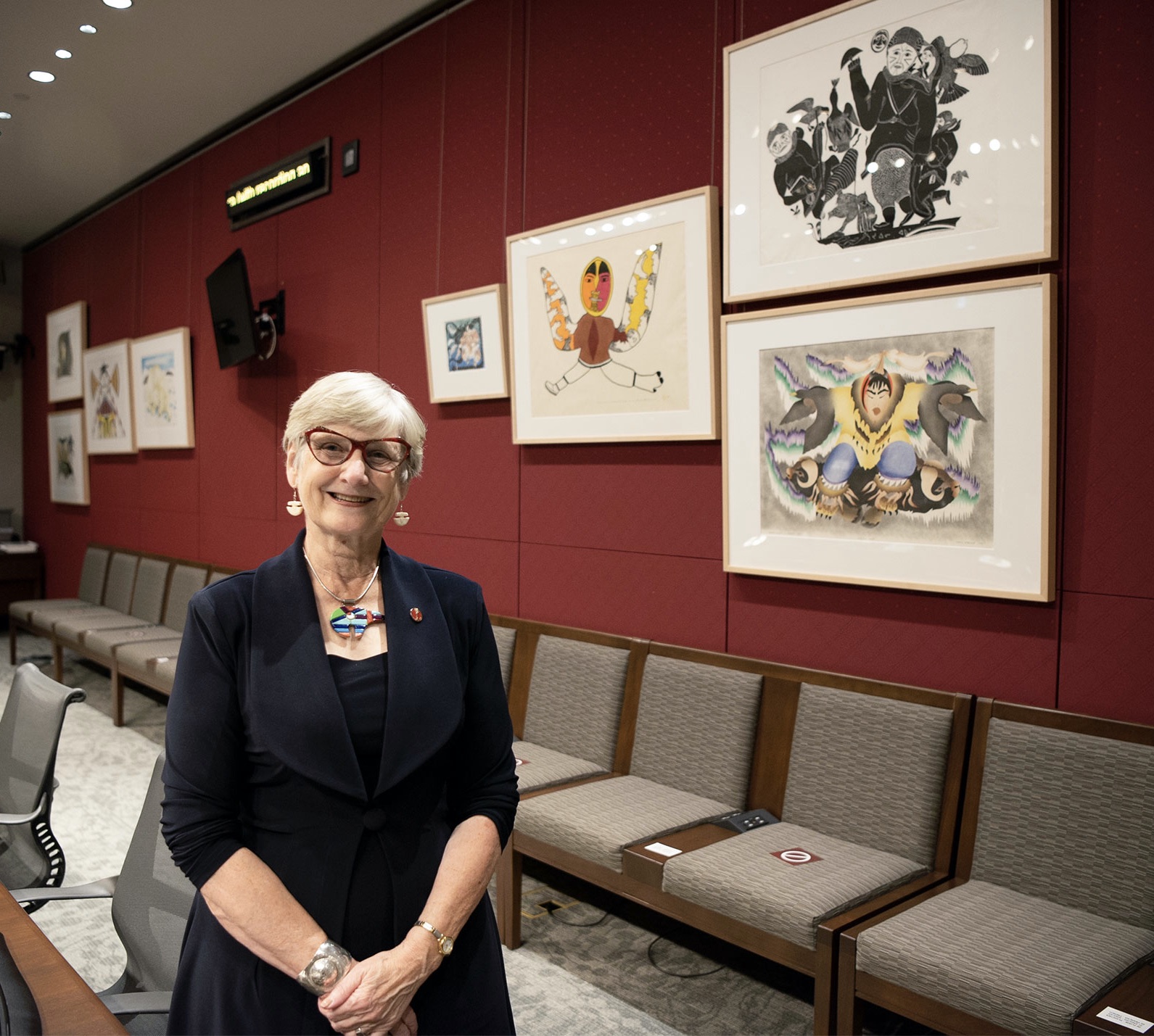 Sen. Patricia Bovey stands in front of eight works of Inuit art on display at the Senate. The collection of prints from the Winnipeg Art Gallery’s Inuit art centre, Qaumajuq, are part of the Museums at the Senate project. (Photo courtesy of the Senate of Canada)

Eight works of art from celebrated Inuit and northern artists will be on display at the Senate this year, thanks to a new project celebrating Canadian art from galleries across the country.

Featured on the wall of committee room B-30 in the Senate of Canada is a collection of prints depicting unique aspects of life in the Arctic, including connections to nature, hunting and shamanism.

Sen. Patricia Bovey, chairperson of the Senate’s artwork and heritage advisory working group, spearheaded the Museums at the Senate program.

“I was very keen to build on the work of the Senate special committee on the Arctic, where we underline the importance of visual art,” Bovey said.

“We heard from [many] people how important the arts were as an integral part of Inuit culture … and we heard from many people that the North and the south must work together, so in selecting this particular gallery museum, we were trying to herald that perspective.”

The eight prints in the exhibition were sourced from the Winnipeg Art Gallery’s Inuit art centre, Qaumajuq, which holds the world’s largest public collection of contemporary Inuit art. The gallery’s curator of Inuit art is Darlene Coward Wight, who chose the eight prints to be displayed in Senate.

Bovey, who was an art historian, gallery director and curator in Manitoba before becoming a senator, said it was a deliberate choice by Wight and the artwork advisory group to select prints by artists from different generations and from across the Arctic, including Igloolik, Baker Lake, Pangnirtung and Cape Dorset, among other places. 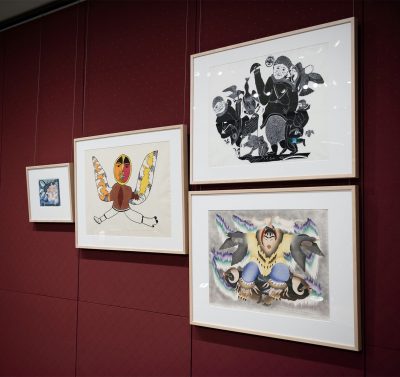 Four of the eight works on display as part of the Museums at the Senate program. From left to right: Sea Goddess (1998) by Sedna; The World of Men and the World of Animals Come Together in the Shaman (1973) by Simon Tookoome; Family Hunting (1963) by Syollie Amituk; and Shaman Dances to Northern Lights (1991) by Mary K. Okheena. (Photo courtesy of the Senate of Canada)

The collection also highlights the decades-long tradition of printmaking in the North, with works from Cape Dorset artists Kenojuak Ashevak and Pitaloosie Saila included in the display.

She noted the polar bears depicted in Pause by artist Andrew Qappik — who is also known for designing Nunavut’s flag — as an example of Inuit art’s connection to the natural world. 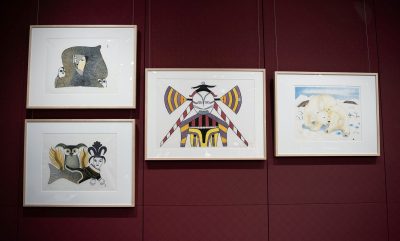 Four of the eight works on display as part of the Museums at the Senate program. From top left: Arctic Madonna (1980) by Pitaloosie Saila; Talelayu Opiitlu (Talelayu with Owl) (1979) by Kenojuak Ashevak; Big Woman (1974) by Jessie Oonark; and Pause (2002) by Andrew Qappik. (Photo courtesy of the Senate of Canada)

“Throughout my whole museum career of over 50 years, I felt very strongly that visual expression is an international language, and we must find a way to hear those Canadians who express their souls [and] the soul of their place,” Bovey said of her motivations behind the program.

“I see this as being really important [for] reconciliation. [It’s] very hard for people from the Arctic to come to the Senate, so this seemed to me to be.… a good way to open that door,” she said. “It’s not just eight works in a room. It is eight works that herald the goals and aspirations of the Senate of Canadians.”

“And then, serendipity, our first Inuit Governor General is about to open Parliament, so it was really important for me to have … some of the pieces from her community in the Senate when she comes to give the Speech from the Throne,” Bovey said.

Restrictions on Senate tours during the pandemic means the public won’t be able to see the artworks in person yet, but they are available to see online until June 2022, when the exhibition is expected to conclude.

Bovey said she hopes that the small collection will inspire viewers to learn more about the art of the North and how it connects to Inuit lives and traditions.

“This really does celebrate Canada’s north, but more importantly, the people and lives and spiritual life of the North,” Bovey said. “I hope we’ll look and see deeper, because these are Canadian treasures.”