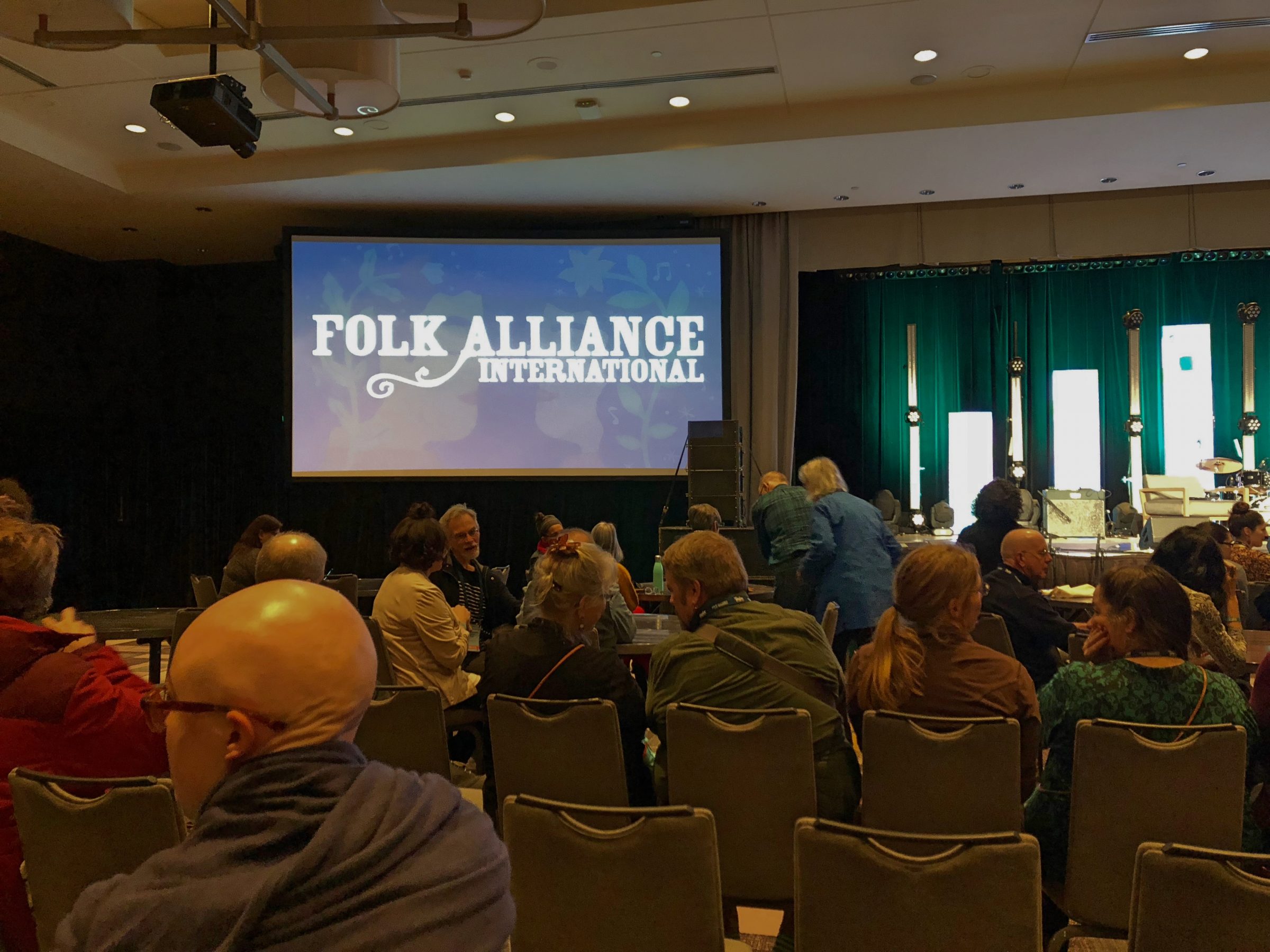 The Folk Alliance International Conference had a large Inuit presence this year, including in its keynote and artists and residency program presentation on Feb. 16, which featured Tanya Tagaq and Twin Flames. (Photo by Kahlan Miron)

The official theme of the 2019 Folk Alliance International Conference may have been “The Spirit of Creativity,” but the spotlight fell on the world’s Indigenous people.

The conference, held this year in Montreal from Feb. 13 to 17, is a massive annual gathering of artists and industry representatives. In 2018 alone, 2,855 people attended from 35 different countries.

But, this year, Folk Alliance took its emphasis on diversity and cultural awareness another step forward.

“Our job, our genuine job as humans, is to connect and to share,” said Executive Director Aengus Finnan.

“We are learning. It is our job, not yours, to make that learning happen, but to do that in partnership. And I am honoured to work with so many incredible people.”

Keynote and Artists in Residency

On Saturday, Feb. 16, audience members lined up outside the auditorium to catch the keynote address from throat singer Tanya Tagaq, as well as a presentation by the artists in residency, Twin Flames.

By the end of the hour, the audience had erupted into multiple standing ovations.

Twin Flames, a musical partnership between Chelsey June from Ottawa and Jaaji Okpik from Quaqtaq, Nunavik, was introduced first as Folk Alliance’s 2019 artists in residency.

The program partners artists with different organizations to “act as an inspiration point,” according to Finnan.

Twin Flames partnered with UNESCO to write a song for the Year of Indigenous Languages. The topic is important to the duo, who write and sing in English, French and Inuktitut.

“It is a privilege to be able to speak my language. It is what I was raised,” said Okpik.

Their song, “Human,” reflects that thinking. It speaks to uniting Indigenous people and the significance of language.

“That’s what this is all about, coming together as human beings, on the same level, communicating,” June explained.

Okpik went on to thank Folk Alliance and Nunavut Sivuniksavut, whose students took part in the video.

Afterwards, Tagaq, the author of Split Tooth and an award-winning throat singer, took the stage.

Tagaq read from her book for part of the hour, singing between passages.

The rest of the hour was spent in an on-stage interview. Tagaq talked about cultural appropriation, especially in regards to Inuit throat singing, and language revitalization.

Her keynote highlighted Inuit realities in general and in the music industry specifically.

When asked whether she thought society is too “doomed” to build a post-colonial world, Tagaq answered: “I refuse to lose faith in the human species.”

There were over 40 Indigenous showcases at this year’s Folk Alliance conference, and Inuit musicians of all genres made a big impression.

Qaggiavuut’s Arctic Song, a group of Inuit from many regions of Canada’s Arctic who perform traditional drum songs along to contemporary dance, played on one of Folk Alliance’s “Spotlight Stages.”

Qaggiavuut had another success at this year’s conference: the organization’s executive director, Ellen Hamilton, won a Spirit of Folk Award at the International Folk Music Awards.

Hamilton is one of eight winners of the award, which is presented to those who are “actively involved in the promotion and preservation of folk music.”

In the conference’s FAI Indigenous Voices room, a private showcase room dedicated to Indigenous performances, Susan Aglukark delighted audiences with her blend of traditional Inuit music and pop. Her show was held on Friday, Feb. 15.

Twin Flames also performed in the FAI Indigenous Voices room the day before.

Off the stage, Kathleen Merritt hosted an “Introduction to Inuit Throat Singing” workshop on Feb. 16. Merritt is known for her unique combination of Inuit throat singing and Celtic fiddle.

Folk Alliance has taken steps to make sure that its commitment to Indigenous inclusivity isn’t a one-year phenomenon.

“We’re getting somewhere, but it can’t just be a drop in the bucket,” said ShoShona Kish, vocalist for Digging Roots and the organizer of the International Indigenous Music Summit that took place Feb. 14.

One strategy is bringing Gerald Torres onto the board of directors.

Torres is a Cornell and vising Yale professor, and an authority on critical race theory, environmental law and Indian Law. He’s also a musician, and facilitated the Indigenous music summit on request by Kish.

Finnan had asked for Torres’s perspective on issues within Folk Alliance in the past. When a position on the board opened this year, Finnan asked him to join.

“My job on the board of directors is to keep the space open and to figure out what role I need to play to make sure that there are resources to support Indigenous artists,” said Torres.

He wants to reach out to Indigenous friends and connections, and ask: “If Folk Alliance could do one thing next year, what would it be?”

“We can’t change the world overnight, but we can start building institutions and institutionalize the presence of Indigenous artists in the Folk Alliance, I think.”

Torres’s other goal is to reach out and create more space for Indigenous voices on the board.

Next year presents a challenge when it comes to maintaining an Indigenous presence, as the conference is going to New Orleans. He wants to maintain that presence while working with the strong black culture within the city and its music.

However, he noted that there’s a lot of influence in the music by Indigenous groups in the area as well, like the Choctaw people.