Inuit crafters continue to be blocked on Facebook for selling sealskin 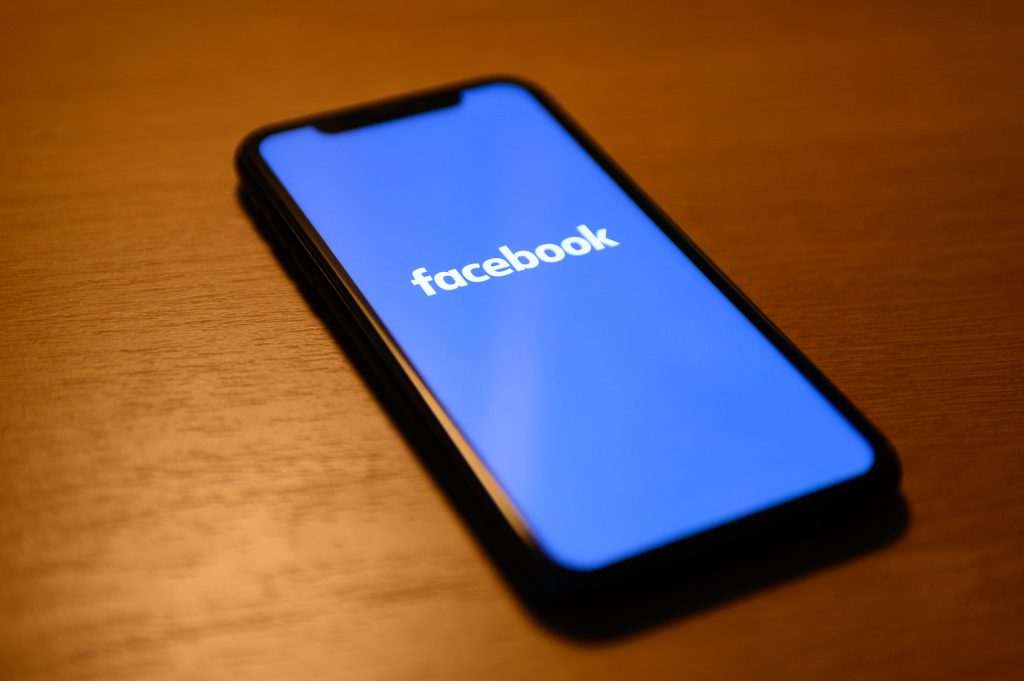 In August, Facebook updated its enforcement of community standards and commerce policies under which the sale of endangered and threatened species and their parts is prohibited. (File Photo)

For Manitok Thompson, a long-time Inuit crafter and former Nunavut MLA, Facebook is an essential way to get her products into the hands of customers across the North and around the world.

But she says she’s frustrated by the social media giant’s decision, since August, to block posts intended to sell crafts made from sealskin and other animal products.

In total, she figures that well over 40 of her items, everything from sealskin mitts to mink-lined hats, have been rejected by Facebook for failing to meet its commerce policies.

“We’re not doing anything criminal, all these [animals] are harvested legally.”

In May 2018, Facebook removed a listing for a sealskin hat but then later admitted that its removal was a mistake.

“This post was removed in error and we’re very sorry about the mistake. Our team processes millions of reports each week and sometimes we get things wrong,” said one Facebook spokesperson at the time.

In August, Facebook updated its community standards and commerce policies under which the sale of endangered and threatened species and their parts is prohibited.

Whereas Facebook had earlier said it blocked the posts of sealskin products by mistake, the new policy appears to forbid the sale of seal products.

According to Facebook, these policies don’t apply to posts that reflect cultural or regional practices, provided that the posts do not promote the sale of animals and endangered or threatened species.

“We understand that Indigenous peoples and those in Northern Canada have unique needs when pursuing their traditional livelihoods across our platforms,” said another Facebook spokesperson.

“When possible, we routinely seek feedback and take regional considerations into view when crafting policies that impact a global community.”

But for crafters like Thompson, who is originally from Coral Harbor but now lives outside Ottawa, access to that global community is a major draw.

“You just spent your time for two weeks, sometimes one week, to finish your product and finally you finish it, you post it and then you don’t get any response for a while, so you check it and it has not even been put on because Facebook blocks it and then you have to fill out the form.” 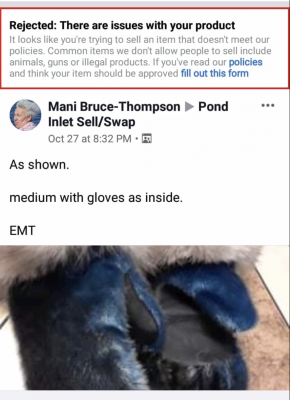 Rejection notices like the one above have appeared on more than 40 of Thompson’s posts, an issue that she says has got worse recently. (Photo courtesy of Manitok Thompson)

Facebook says that users experiencing similar issues to Thompson, who feel their rejection was a mistake, can request a review by following these steps.

But for many, filling out the form every time they post an item is a nuisance.

And there’s no guarantee the item will be approved. For some crafters, delays can be costly.

“With a high cost of living in Nunavut and a lot of people with a lack of jobs, this is something they can do. Facebook is easy. It’s a great tool. But Facebook is blocking people who are trying to sell their products when they’re trying to put food on the table,” said Thompson.

Increased rejections by Facebook have led some to try to find creative ways around the problem, including the use of syllabics, but Thompson said doing so can drastically limit your audience.

When asked what she’d like to say to Facebook, the former MLA for Rankin Inlet South/Whale Cove who also holds the title of Nunavut’s first female cabinet minister replied, “Come to Nunavut and see how much food costs and see how easy it is to make a pair of mitts and sell it on Facebook and get money and support the family. See for yourself how frustrating it is [when items are rejected].”

She would also like to see Inuit organizations, such as Inuit Tapiriit Kanatami and Nunavut Tunngavik Inc., start a dialogue with the social media giant over the impact their new commerce policies may have on Inuit and the North.

For the time being, Thompson will continue to use Facebook to sell her wares despite the challenges, but fears what might happen if one day crafters like her completely lose that ability.

“I’m not sure how else we can sell our products. This is the best way of doing it.”