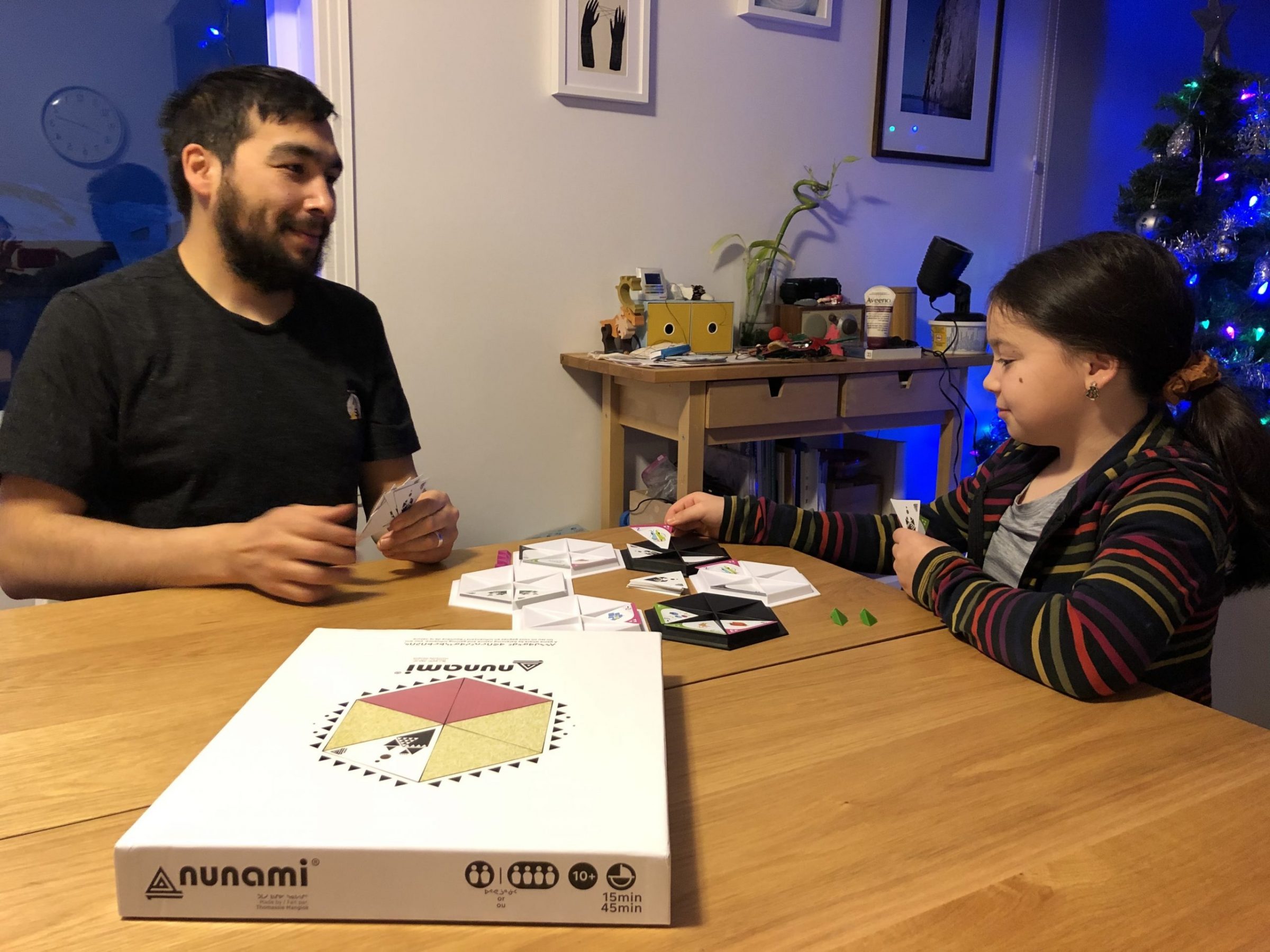 Thomassie Mangiok, the creator of the board game Nunami, plays the game with his daughter at home in Ivujivik. Nunami is now available on Amazon and at co-op stores in Nunavik. (Photo courtesy of Thomassie Mangiok)

A board game developed over the course of years from cut-up cereal boxes in Thomassie Mangiok’s Ivujivik home is now ready for worldwide distribution.

The artist and educator bills Nunami as the first Inuit board game. Nunami means “on the land” in Inuktitut. 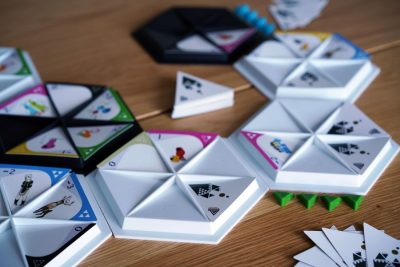 Players — from two to four — can take on the role of either human or nature. It’s a game of strategy, but the goal is not to control the land or beat your opponent, but learn how to live together.

“Each time you play, not only do you get a sense of exploring, but you also see what’s happening and you create a picture in your head,” said Mangiok.

Mangiok derived the game from a variety of inspiration–watching his aunt’s games of Chinese checkers, time spent on the land, even outer space.

“It’s similar to Star Trek as it’s about exploring, ” he said.

What it’s not like is chess: “in chess you have a much better chance to win if you start first, but in Nunami it doesn’t matter who starts first or second.”

The game sat in the back of Mangiok’s mind for years, but he said he didn’t dare tell anyone about it until he had worked out the basics.

Mangiok, a graduate in fine arts from Marie-Victorin CEGEP in Montreal, is now centre director and vice-principal at Ivujivik’s Nuvviti School.

A couple of years ago, he tried to raise money for his project with Kickstarter, an online crowd funder for creative projects.

But he didn’t hit his fundraising target, so he couldn’t draw the funds Nunami had raised from potential supporters.

Mangiok said in the end that turned out well, because it gave him more time to improve the game: “the board is much better, the cards are more secure, and I was able to make it for four players.”

Then, he went back to Kickstarter, but this time he had also received loans and grants from the Kativik Regional Government to manufacture the game.

Bringing Nunami to world turned out to be complex: he wanted to find a manufacturer in Canada, but ended up sourcing it to China. Now he’s selling it online through Amazon and in Nunavik’s co-op stores.

To sell Nunami he had to obtain a unique bar code, and and Amazon required him to supply photos of the game and himself to prove he and his creation were legitimate. But it was worth it.

“I am now so happy with it because it’s available on Amazon,” Mangiok said. “I never imagined that it would be at this stage.”

And the timing is good, he said, because board games are regaining popularity.

So far, 5,000 Nunami games have been made and 200 of these go as needed to Amazon warehouses.