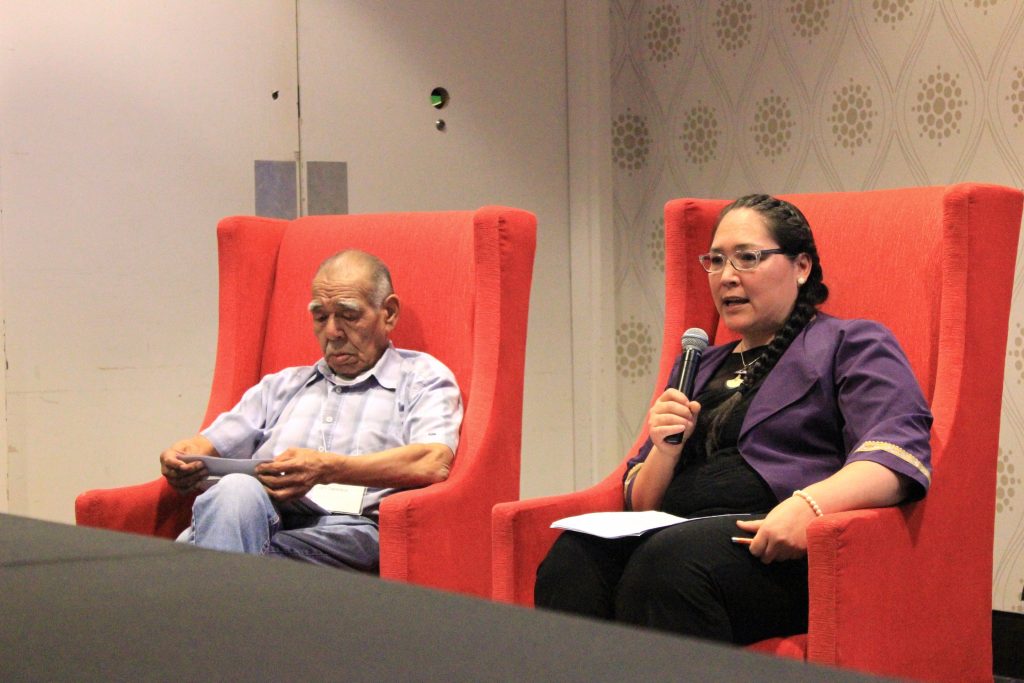 Nunavut Tunngavik Inc. president Aluki Kotierk, right, speaks on a panel entitled “Inuktut as a human right” on Thursday, Oct. 3, at the Inuit Studies Conference in Montreal. With her is Louis Tapardjuk, board member of Inuit Uqausinginnik Taiguusiliuqtiit, Nunavut’s language authority. Despite the absence of translation, the two spoke entirely in Inuktut. (Photo by Lisa Gregoire)

A Montreal hotel conference room was abuzz on Thursday, Oct. 3, as people attending the 21st annual Inuit Studies Conference streamed in to hear two Inuit leaders talk about why speaking Inuktut in Nunavut is a human right and how that right is casually denied.

Nunavut Tunngavik Inc. president Aluki Kotierk and Louis Tapardjuk, a former Nunavut government minister and board member of Inuit Uqausinginnik Taiguusiliuqtiit, Nunavut’s language authority, arrived on time and sat in two comfortable wingback chairs at the front of the room.

Camera operators set up to live-stream the event to NTI’s Facebook page, a screen projection offered the audience various conference hashtags to use and a link to English-language speaking notes, and the mostly Inuit audience settled in for the talk.

Kotierk welcomed her audience and began the discussion in Inuktitut. Inuktitut-speakers responded from time to time with nods of agreement and applause. Those who couldn’t speak Inuktitut, this writer included, sat and stared. Some people left the room. Some leaned over and privately scrolled their phones, waiting for the English part.

There was no English part.

Welcome to the bewildering world of many Inuit in Nunavut.

“The name of it is Inuit Studies Conference so it makes sense, particularly when we’re talking about Inuit languages, that we wanted to use an Inuit language,” Kotierk said following the presentation.

“Both Louis and I spoke about it and knew there would be no interpretation but decided it was crucially important that we use our language when we’re talking about the need to support and continue to have our language thrive.”

The international conference, which brings together Arctic experts from the North and south, has, in recent years, begun to include more Inuit speakers and presenters, more panels relevant to Inuit needs and more collaborations between Inuit and non-Inuit academics. This Inuktitut panel, about language as human right, appeared to symbolize that evolution.

Kotierk’s speaking notes, which can be found here, outline numerous laws that ought to promote and protect Inuktut in Nunavut where the majority population is Inuit and the majority language spoken is Inuktut.

Those laws range from the United Nations Declaration on the Rights of Indigenous Peoples to the calls to action and justice from the Truth and Reconciliation Commission and the National Inquiry into Murdered and Missing Indigenous Women and Girls, and territorial language laws in Nunavut.

Kotierk listed several recent examples where Inuit deaths were attributed, at least in part, to language and culture barriers, such as that of Annie Kootoo, who died of acute liver failure in 2017, and 15-year-old Ileen Kooneeliusie, who died from tuberculosis that same year.

“Inuit want to live with dignity and have the human right to do so. Inuit Canadians should not be dying because they are unable to access and receive essential services on an equitable basis with other Canadians,” Kotierk wrote in her speaking notes.

In his speaking notes, Tapardjuk described a recent incident in Iqaluit where RCMP officers visited an elder to tell her that her adopted son had been stabbed to death at a young offenders facility. The woman was alone and did not speak English. Tapardjuk said police officers had to stop a vehicle and ask someone to help them deliver the traumatic news.

“There are a number of protocols in that scenario that should be followed in terms of does the person have support when you’re coming with life-altering information, let alone an interpreter,” Kotierk told Nunatsiaq News.

“So many of us Inuit who speak English and Inuktitut are often called to do this. We are expected to interpret in any given situation, even if we don’t know the people. Sometimes it’s confidential information. So that, I would say, is another breach of human rights.”

Kotierk said at the very least, Inuktut-speakers in Nunavut should have access to frontline service in their language in the areas of health care, justice and education. But even those aren’t guaranteed.

She and other leaders continue to call on the federal government to protect language and dignity in their homeland. Ottawa passed its new Indigenous Languages Act in June to much criticism from NTI and Inuit Tapiriit Kanatami, who said it ignored most of their suggested amendments.