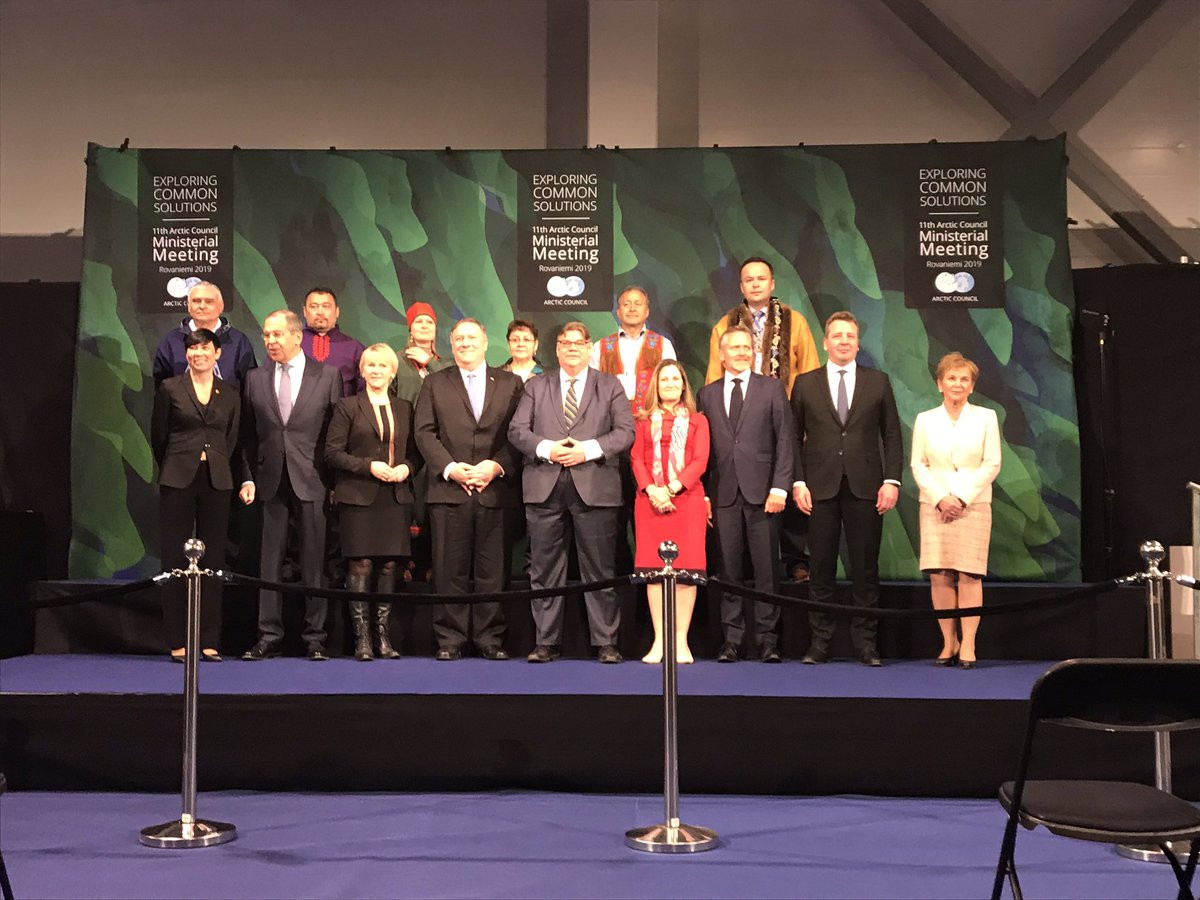 This group photo taken at the Arctic Council ministerial on May 7 in Rovaniemi, Finland, belies the lack of agreement at the meeting, due to the U.S. delegation’s refusal to acknowledge climate change. (Photo courtesy of the Arctic Council)

After the May 7 Arctic Council ministerial in Rovaniemi, Finland, the Inuit Circumpolar Council had harsh words for the United States delegation.

The United States set an “unfortunate precedent” by refusing to agree on language that would have allowed the Arctic Council to issue a final declaration instead of a chair’s statement, the ICC said in a statement issued late Tuesday, after the ministerial meeting had wrapped up.

“Refusing to allow the words ‘climate change’ into the declaration is a moral failure,” said Dalee Sambo Dorough, the international chair of ICC, which represents roughly 165,000 Inuit in Greenland, Canada, Alaska and Chukotka.

“This is the first time the Arctic Council has failed to issue a declaration at the end of a two-year chairmanship, and it’s a serious blow to the future of what is supposed to be a consensus-based body. We are worried about the undermining of the Arctic Council’s credibility at a time when genuine leadership and a strong Arctic voice is needed,” said Hjalmar Dahl, the president of ICC-Greenland.

It’s particularly upsetting to the ICC that all parties couldn’t agree to acknowledge the impact of climate change on Inuit.

“Inuit are feeling the effects of climate change every day,” Sambo Dorough said. “While the U.S. government concerns itself with semantics, playing games with words, our people are witnessing the adverse impacts of climate change. What about us and our reality?”

Negotiations were supposed to result in what would have been called the Rovaniemi Declaration, the ICC release pointed out, but the U.S. opposed use of any language that would point to the need for action on climate change.

The led to the release of a one-page, seven-paragraph joint statement that avoided mentioning any of the threats and challenges faced in the Arctic.

So Finland’s chair of the Arctic Council, its foreign minister Timo Soini, released a chair’s statement at the end of the meeting, which said “a majority of us regarded climate change as a fundamental challenge facing the Arctic” and there is an “urgent need” to deal with it.

“This position was taken by the U.S. administration despite the fact that the 2017 Fairbanks Declaration at the end of the U.S. chairmanship clearly cited the effects of climate change in the Arctic and ‘the need for action at all levels,’” said Monica Ell-Kanayuk, President of ICC-Canada.

“It’s unfortunate there’s no declaration but at least the chair’s statement recognizes the urgency of dealing with climate change.”

The non-binding chair’s statement also mentions the importance of the 2018 Intergovernmental Panel on Climate Change report on the consequences of failure to limit the increase of the average global temperature to 1.5 degrees Celsius.

“This is not just a question of words—it’s about the long-term survival of our culture and communities,” said Liubov Taian, the president of ICC-Russia.

“Our traditional Inuit territory covers 40 per cent of the Arctic region and it is essential that governments work with us to deal with the threat of climate change throughout Inuit Nunaat, our Arctic homeland.”