Inuit leaders Simon and Obed to greet Pope in Edmonton 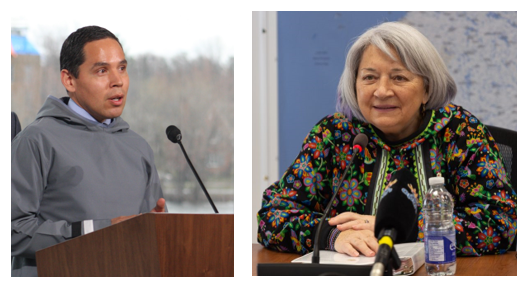 Inuit Tapiriit Kanatami president Natan Obed and Gov. Gen. Mary Simon are among those scheduled to greet Pope Francis on Sunday when the head of the Roman Catholic Church arrives in Edmonton. (Photos by Corey Larocque and Jeff Pelletier)

Inuit leaders Gov. Gen. Mary Simon and Inuit Tapiriit Kanatami president Natan Obed are scheduled to be among the Indigenous representatives who will greet Pope Francis on Sunday when he arrives in Edmonton.

As Governor General, Simon is often called upon to welcome world leaders in Canada. As president of ITK, Obed is the head of the national organization that represents Inuit in Canada.

Francis, the head of the Roman Catholic Church, begins a six-day visit to Canada on Sunday.

He is expected to delivery an apology for the Church’s role in Canada’s residential school program, a federal government plan for more than a century to separate Indigenous Peoples from their culture by removing young people from their families and sending them to church-run school.

Iqaluit is the last stop on the Pope’s trip, which begins in Edmonton and also includes a visit to Quebec City.

Francis’ official schedule has him arriving in Edmonton at 11:20 a.m. local time (1:20 p.m. Eastern Time). Organizers of the trip say it’s “significant” that Francis will not celebrate mass on his arrival — particularly because it’s a Sunday.

Instead, Francis’ first public statement in Canada will be on Monday, when he visits the site of the former Ermineskin Residential School on the Maskwacis First Nation in Alberta.

Francis is travelling aboard an A330 airplane belonging to ITA Airways, the state-owned airline in Italy. It’s the same plane he will use throughout the Canadian trip, including when he flies to Iqaluit from Quebec City on Friday afternoon.

His Iqaluit visit is expected to last about four hours, but will include a public event outside Nakasuk Elementary School and a private meeting with Inuit survivors of the residential school system.

The 85-year-old pontiff is expected to use a wheelchair throughout his Canadian visit. Public appearances will be shorter than 90 minutes, according to a background document published by the Canadian Conference of Catholic Bishops, the organization responsible for co-ordinating the papal visit.

A lift positioned at the back of the airplane will help him get out of the plane.

He will use a small Fiat 500X — made by the Italian automaker — to travel from the plane to a hangar where Simon and Trudeau will greet him as part of the official arrival ceremony.