Inuit myths brought to life on the national stage 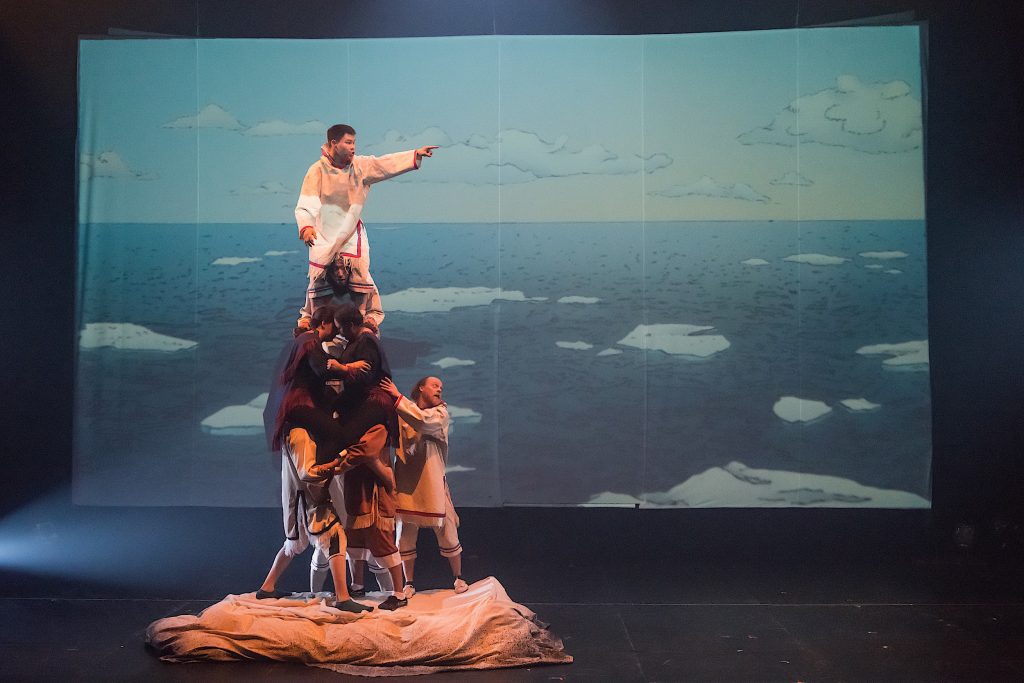 As the lights dimmed in the Ottawa’s National Arts Centre theatre on Friday, Jan. 10, a woman’s voice began to speak softly in Inuktitut. Projected through speakers, her words floated through the audience. The voice took on an echo as stars began to illuminate the onstage video screen. In the background, the wind whistled and breaking ice cracked.

It was the start of an otherworldly performance. Over the next hour and a half, Unikkaaqtuat brought Inuit myths to life on the southern stage.

A blend of circus, theatre, music and video, Unikkaaqtuat moves through a series Inuit myths from across the Arctic. The show is a collaboration among the Igloolik circus collective Artcirq, Taqqut Productions and the Montreal circus collective Les 7 Doigts De La Main. The show premiered this past weekend.

Unikkaaqtuat’s story focuses on a young Inuk boy in a southern hospital. Scenes shift between myth and modern day as the boy listens to recorded stories passed on from his namesake grandfather.

A message from the show’s co-artistic directors, written in the program, invites the audience to get lost in what they’re about to see—whether you’re familiar with every story or experiencing them for the first time. “The North is vast,” they wrote. “Many other versions of those old stories have been travelling the land through time.”

“Tonight, you may not understand everything, but allow yourself to be carried away.”

“The message I want to give [the audience] is find your own stories in your life,” said Terence Uyarak, co-artistic director of Unikkaaqtuat and co-director of Artcirq, in an interview with Nunatsiaq News. “Be proud of where you come from. Wherever you are from.”

Guillaume Saladin, co-artistic director and founder of Artcirq, added: “For Inuit that are going to watch, I really hope they will be proud. Proud of belonging to this culture. And for all the southern audience, I hope they can open their mind enough to travel North. Even for an hour and a half. Just to start to see things differently, and then to feel and to listen to the language and feel the cold and feel the North.” 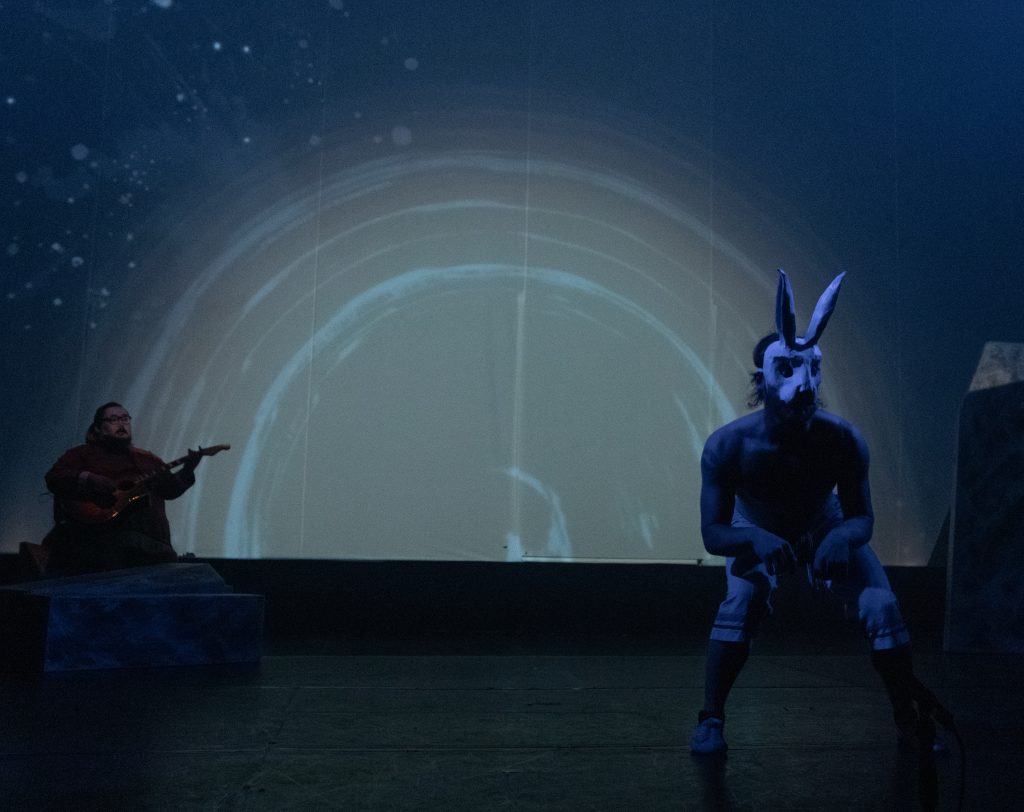 The rabbit prepares to take on the crow in the Inuit myth of the origin of day and night, performed as part of the multidisciplinary show Unikkaaqtuat. (Photo courtesy of Alexandre Gaillez)

Performed partially in English and mostly in Inuktitut, how you experience Unikkaaqtuat can differ depending on what languages you know. But Unikkaaqtuat isn’t told through words alone—the language of circus, Saladin says, is for everyone.

“It’s just another language. … It’s something that everyone can understand or feel. So maybe it helps, it can help to tell something because we’re trying to tell it with words, to tell it through music, through video projections, through our own body.”

Circus is a great tool, adds Uyarak. He says Artcirq uses circus “as a tool to learn our own ways of life, before or today, and use it to have exchange with the southern artists or people or in the whole world.”

And Uyarak says it works well with Inuit tradition because “we always have these Inuit games and celebrations, sharing ways in our own culture, too. It was not that hard to mix.”

Unikkaaqtuat proves that the language of circus can be powerful. In the performance of the origin of death, for example, few words are used but the story is well conveyed.

In the myth, many Inuit populate a small island, which grows too small for their numbers. The story turns from humorous—acrobats clamber on top of each other to call for help; Josh Qaumariaq, a great addition to the cast, declines to help as he sails past and strums his guitar—to morbidly beautiful, as the group falls into the sea and dies. In the underwater part of the story, throat singers hang from aerial silks, musically accompanying an aerial soloist as she “drowns,” spinning and convulsing in the air.

Unikkaaqtuat draws inspiration from Germaine Arnaktauyok’s illustrations. Arnaktauyok also acted as a consultant, illustrator and staging support for Unikkaaqtuat. On a video screen at the back of the stage, animation in Arnaktauyok’s style shifts between serving as a background and playing the part of storyteller.

For example, in the origin of death, a shifting sea on the screen adds context to the aerialist’s performance. But in the story of the mother of sea mammals, animation almost exclusively tells the story.

Mostly, though, Unikkaaqtuat blends the mediums. In the myth of the blind boy and the loon, a blind boy is treated cruelly by his mother and, after he regains his vision, casts her into the sea. There, she turns into the first narwhal. Onstage, actors performed the myth until its final moments, when the mother is dragged off stage. She then appears onscreen, where animation depicts the mother’s slow transformation.

No matter how it was used, though, the animation always felt like a storybook brought to life. It also helps show why Artcirq is always so eager to collaborate with other artists.

“Every collaboration, people leave a little piece of themselves with us, and then we carry it until the next one,” Saladin said. “That’s how we’ve been evolving over the last decades. And it’s always a beautiful moment, because you recreate. You don’t just do the same thing over and over, you always bring different colours.”

“We’re just seven on stage from the North right now, but so many have been feeding us.” 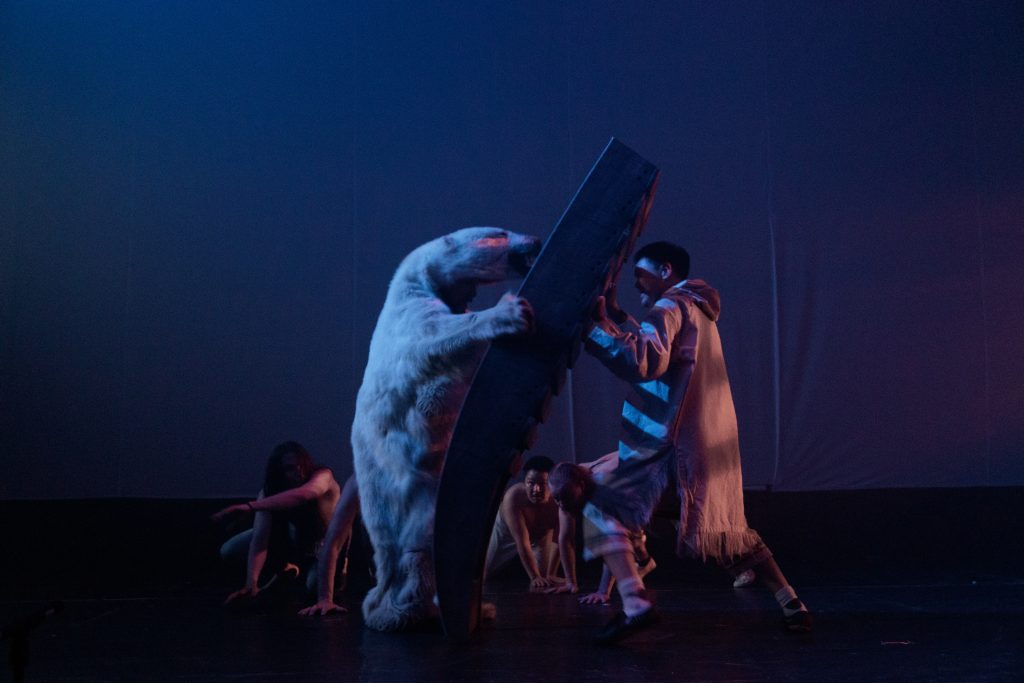 Artists perform the Inuit myth of the polar bear hunt that marked the sky in Unikkaaqtuat. (Photo courtesy of Alexandre Gaillez)

Because it’s so expensive to bring so many artists south, Saladin also highlighted the importance of their sponsors for Unikkaaqtuat—including First Air, the Canada Council for the Arts, the Qikiqtani Inuit Association and the Government of Nunavut. “We need support.”

That evening, beyond collaborations and sponsorships, the audience also added their contribution to the experience as Unikkaaqtuat kept inviting viewers into its world.

Performers would encourage audience members to whistle to bring back the northern lights or clap along as performers danced to the accordion and played Inuit games. And, in their performance of the time when there was only darkness, when Inuit hunters carried tiny flames to chase animals through the dark, acrobatic “rabbits” hid in the audience area—leaving the hunters to look for them between rows.

Performers took care to immerse viewers in Unikkaaqtuat’s stories, helping bring the feel of the Arctic to the room. And audiences will have the chance to become immersed again: a documentary on Unikkaaqtuat will be released sometime later this year, which will capture the performance as well as the year and half of work that led up to it.

“We would love every community to see it, but it’s not going to be possible,” said Saladin. “There are no theatres in Nunavut. So we thought through making [a documentary], that you can see the process and the show, then that can go in every screen in the North.”

They’re also just eager to share a performance they’re proud of. “We have been dreaming to do such a thing like we are doing right now,” Uyarak said.