“No one makes any concrete commitment to spend any money, perform any actions or build any houses” 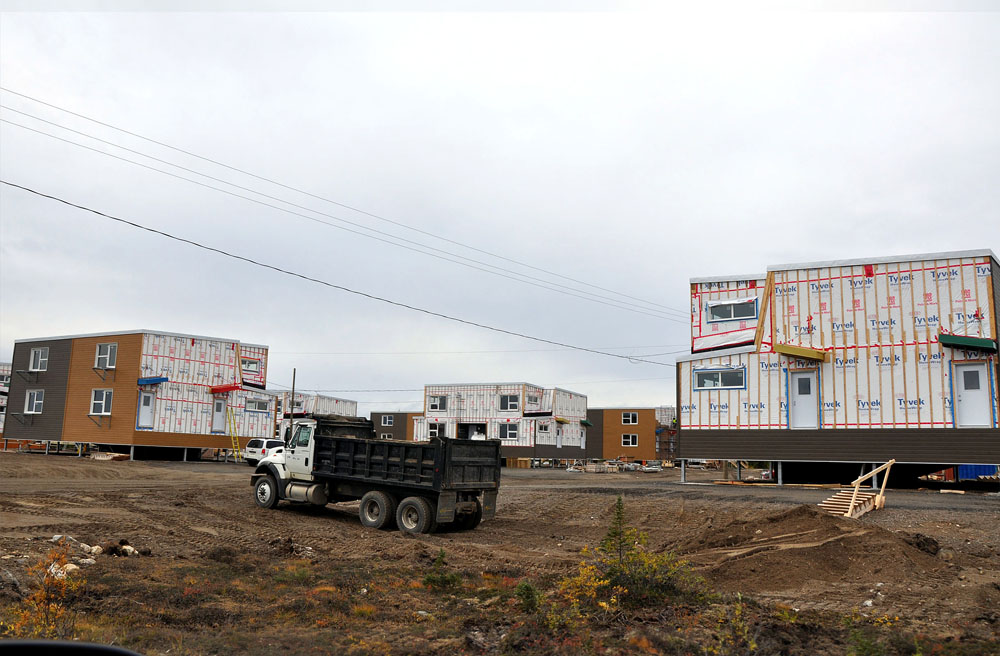 Social housing units under construction in Kuujjuaq in 2015. (File photo)

It’s not hard to understand why, after throwing it out into the world last week, they fled the scene under the protective cover of a late evening press release and a barrage of fawning Facebook selfies.

The stench of futility given off by the Inuit Nunangat Housing Strategy, “co-developed” by the Government of Canada and Inuit Tapiriit Kanatami and released this past April 3, is so strong it’s hard to blame its creators for doing a dump-and-run.

If you don’t trust that judgment, we’ve embedded a copy of the strategy at the bottom of this editorial so you can read it for yourself.

You’ll see that within the document, which bears the logos of Canada and ITK, no one makes any concrete commitment to spend any money, perform any actions or build any houses.

If this were some other issue, it wouldn’t matter. Governments and quasi-government organizations often emit policy documents that nobody reads and nobody acts on.

But housing is not a trivial issue. Northern Canada’s severe housing shortage sits at the centre of a grave humanitarian crisis, linked to deteriorating mental health, poor outcomes in school and recent frightening outbreaks of tuberculosis and other communicable diseases.

The housing strategy acknowledges that, of course, and gathers together various assemblages of other long-recognized facts that, while valid, have been repeated so often that they’re now turning into tiresome clichés.

Instead, the federal government and on the four regional Inuit organizations heap praise upon themselves for things they did between 2016 and 2018. But for the future, they offer vague platitudes and not much else.

Take, for example, one of the lesser-known but more serious aspects of the housing crisis: the skyrocketing cost of operating and maintaining existing stocks of social housing.

Late last month, Terry Audla, the president of the Nunavut Housing Corp., told the Baffin region’s mayors that the cost of maintaining and operating a single social housing unit in Nunavut now averages $26,700 a year.

This means that if the NHC were a private landlord, it would be required to charge an annual average rent of at least $2,200 a month, and likely more, just to break even. Those staggering costs, which include fuel, power, garbage pickup, water and sewage and building maintenance, aren’t news by the way.

They’ve been known for years. In the territories, the governments of Nunavut and the Northwest Territories have been getting an annual subsidy from the Canada Mortgage and Housing Corp. to help cover them. But that subsidy contains a poisoned pill. Since 2004, that subsidy has been slowly shrinking. And by 2037, it will have shrunk to zero.

The strategy acknowledges this, and says what everyone in the field has known for years, that declining operation and maintenance funds will cause territorial housing agencies “to direct more of their own funding to existing units as opposed to building much needed new ones.”

The strategy’s solution, however, is vacuous, to say the least: “However, it is expected that through bilateral agreements to be in place in 2019, provincial and territorial governments will commit to preserve and expand the number of community housing units in their respective jurisdiction.”

What agreements? Between who and whom? Given that provincial and territorial governments are not parties to the Inuit Nunangat Housing Strategy, and that these “agreements” haven’t been signed yet, this claim must be treated with the utmost skepticism.

No clear commitment to build

Let’s turn to the questions that matter most to those who don’t have housing. How many more units? Where and when will they be built?

On that point, the strategy heaps lavish praise on the Liberal government and on Inuit organizations for their recent construction commitments—even if none of them have ever seen a credible third-party evaluation.

These projects, using federal dollars committed in the 2016 and 2018 Liberal budgets, have produced 144 units in Nunavik built by Makivik Corp.’s in-house construction firm, 24 units built in Nunatsiavut by the Nunatsiavut government, and 15 units in the Inuvialuit settlement area.

It does contain one interesting idea: that Inuit organizations may get involved directly in housing construction and in the management of housing. That’s a refreshing change of attitude.

But what will they do in the future? On that, the housing strategy, unfortunately, offers little more than fog and obfuscation.

So the strategy’s authors tell us Nunavut Tunngavik Inc. and the three regional associations in Nunavut want to create an “Inuit designed and delivered, long term affordable housing program.” The strategy says this would encourage homeownership and “complement” the housing corporation’s current offerings.

So who would pay to construct these “Inuit designed and delivered” housing units and how much would they pay? No answer. How many of these units would the Inuit organizations build and where would they build them? No answer. Who would subsidize their operation and maintenance costs? No answer.

The strategy does say the Inuit-run housing program in Nunavut would involve a combination of private financing and a “complementary allocation” from government, without specifying which government. But don’t hold your breath. This is not a commitment that any thoughtful person ought to trust.

Meanwhile, the Liberal government led by His Esteemed Awesomeness, Saint Justin of Papineau, is headed for an ignominious defeat. The departure of two of that government’s most respected ministers, Jody Wilson-Raybould and Jane Philpott, coupled with Trudeau’s incompetent, mendacious response to Canada’s worse political scandal in at least two decades, has, in the eyes of many Canadians, destroyed his credibility and moral authority.

National opinion polls, including CBC’s poll tracker, suggest that if an election were held right now, Andrew Scheer’s Conservative party would, at the very least, form a minority government, with the New Democratic Party holding the balance of power.

That means last week’s dubious housing strategy, along with other more substantial products of the Inuit-Crown Partnership Committee, now sit on a shaky foundation anyway. The Inuit organizations who participate in that process should put away their souvenir selfies with Saint Justin and start building bridges with NDP and Conservative leaders. JB