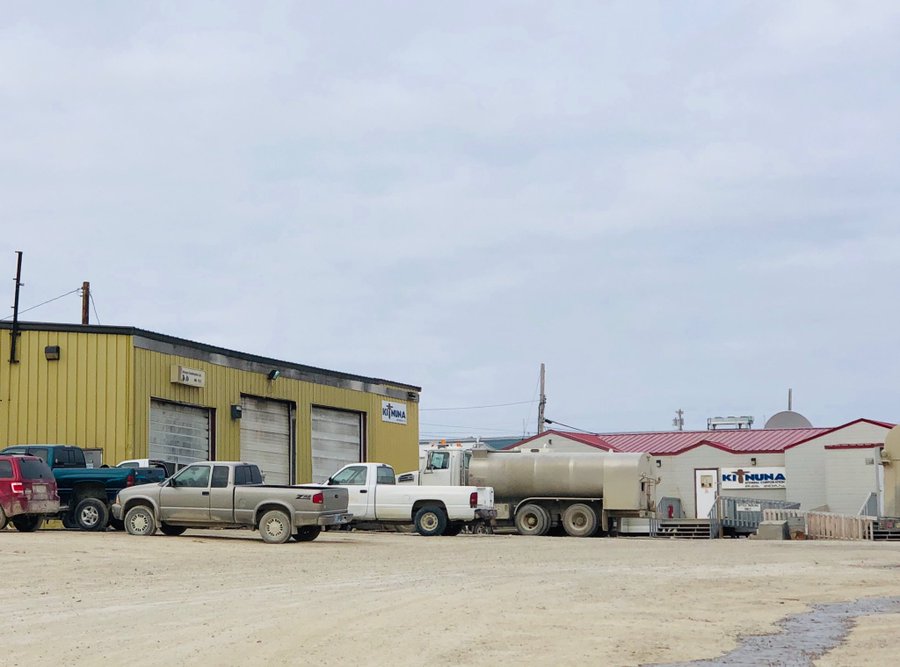 Kitnuna Corp. in Cambridge Bay appears to be facing serious challenges, according to information shared with the Kitikmeot Inuit Association’s’ annual general meeting in Cambridge Bay. (Photo by Jane George)

CAMBRIDGE BAY—Worries about one of Cambridge Bay’s larger private employers, Kitnuna Corp., surfaced at the annual meeting of the Kitikmeot Inuit Association in Cambridge Bay this week.

There are 31 Inuit now employed at the Cambridge Bay–based contracting and service-provider company, which is wholly owned by the KIA’s business arm, Kitikmeot Corp., according to a report tabled at KIA’s annual general meeting on Oct. 1.

“What’s in the future [for employees]—they need more guidance from higher up,” said André Otokiak, Cambridge Bay’s board member, after listening to KC’s report on Kitnuna.

KC president David Omilgoitok told the AGM that “in early 2017 we recognized that Kitnuna was struggling to address growing business challenges.”

“We made the decision to replace its management team and begin a restructuring effort that continues to this day,” he said. “Some of these restructuring decisions are now becoming apparent to the Cambridge Bay community, as certain unprofitable lines of businesses have been wound down.”

In response to Otokiak’s question, Omilgoitok said that KC is trying to “see if we can restore” the company.

That’s all he said he could say publicly.

Last year, KC sold its Kitnuna pharmacy and the Kitikmeot Centre building, which are both now owned by the North West Co. retail chain.

Also in 2018, Kitnuna was one of two subcontractors working on the construction of the Canadian High Arctic Research Station in Cambridge Bay that were fined thousands of dollars after pleading guilty to safety violations that resulted in the injury of a worker in 2015.

Kitnuna pleaded guilty for failing to take all reasonable precautions and carry out all reasonable techniques to ensure the health and safety of every person in the establishment, under the territory’s safety legislation.

No financial reports for Kitnuna nor for KC were presented to the KIA.

KC said last year that it discloses this information to its sole shareholder, the KIA, at their first meeting of every calendar year.

“Due to the commercial, confidential nature of these financial reports, KIA’s board of directors receive this information in camera,” KC said.

“Sharing this information with the general public could impact KC’s businesses and would give our competitors an unfair advantage, especially given the fact that our competitors have no requirement to disclose their own private information to the public.”

Kitnuna, which provides services including fuel supply, project management, general contracting and environmental remediation, was originally a 50-50 joint venture between Nunasi Corp. and Kitikmeot businesses until Nunasi transferred its shares to KC.

In 2015, KC became the sole owner of Kitnuna, which manages a handful of subsidiary companies that operate in Nunavut’s western region.

According to the KC report tabled at the AGM, these companies, like Kitikmeot Camp Solutions, could employ roughly 50 Inuit in addition to those who work directly for Kitnuna.

A downturn in mining work and exploration, also touched on at the AGM, has likely affected Kitnuna: Sabina Gold and Silver Corp., though it has finished going through the regulatory process, is now in a holding position while it waits to raise money to build its $400-million-plus proposed mine, and Glencore Canada Corp. has put its Hackett silver mine project in care and maintenance, meaning the mine site is closed but there’s the potential for operations to resume.

There are only four mining exploration companies now active in the region, the KIA lands department told the AGM—the lowest number on record.