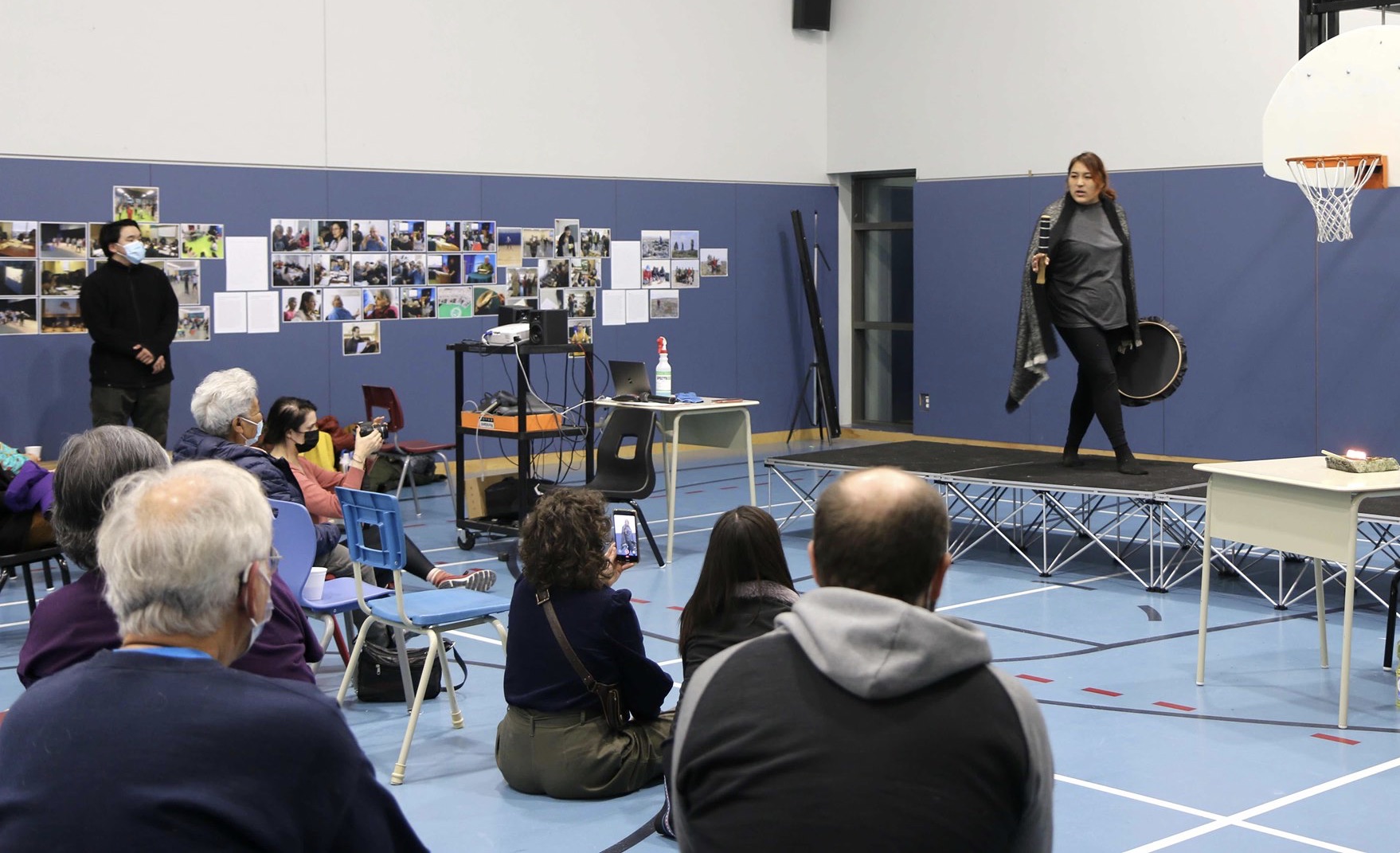 The Aarsiq Theatre celebrated its launch at Puvirnituq’s Ikaarvik School on Oct. 14 with music and performances by community members. The theatre’s plays are designed to promote the Inuit language. (Photo courtesy of Malaya Qaunirq Chapman/The Aarsiq Theatre Company)

A group billing itself as Nunavik’s first Inuit theatre company is ready to make a scene.

The Aarsiq Nunavik Inuit Theatre Company is a new youth-centred theatre group that aims to use plays and stage performances to promote the language and culture of Nunavik Inuit. The company celebrated its official launch on Oct. 14 at Puvirnituq’s Ikaarvik School.

Adamie Kalingo is president of the board of directors for the Aarsiq Theatre. He explained that the idea for a language-focused theatre company first came up during a 2012 inquiry on the state of Inuktitut in Nunavik by the Avataq Cultural Institute.

Following recommendations to use the performing arts to connect young people with their language heritage, Kalingo, then a language analyst with Avataq, teamed up with theatre professionals, emerging young Inuit actors and language experts to form the Aarsiq Theatre Company.

“We tried to make it oriented towards the youth of Nunavik and tried to make it as ethnic as possible,” Kalingo said. “Even though we have four different dialects in the region, which is an obstacle in itself, the speciality … is Inuktitut language.”

Kalingo said the theatre group targets young people in Nunavik between 16 and 35 years of age who are interested in performing as well as improving their Inuktitut.

“They [have] to be able to read two languages directly and quickly. It’s a skill in itself,” Kalingo said, explaining that the process of learning the history behind the plays often helps both the young actors and audiences learn the language the play is being performed in.

“In the process of looking at theatre, they’re listening to the dialogue and by doing so, they are learning the terminology that this important for them,” he said.

Kalingo wrote and co-wrote the theatre’s first two plays based on famous Inuit legends, Atungaq and the Hunters, about the legendary traveller of Nunavik, and Kautjajuq, a story of a mistreated orphan. The Inuktitut plays have been performed in front of small gatherings and turned into radio productions by the group, which has also made the scripts available online.

Aarsiq is now preparing a production based on the historic tragedy of Aukkautik, which tells the story of an Inuk father committing murder — an act of revenge for the accidental killing of his son on a hunting trip. The company hopes to take the new play on the road, Kalingo said.

“It’s starting to get off the ground. There are certain obstacles, but the system is in place for the theatre group to travel to communities with props and along with sound equipment and the coordinators of the actor,” he said.

At its core, Kalingo says the theatre group is about harnessing the power of art and performance to share language and cultural traditions with young people.

“It’s … elders like myself who share their knowledge of the past and we advise the youth with what we know—it comes from elder to youth in that way,” Kalingo said.