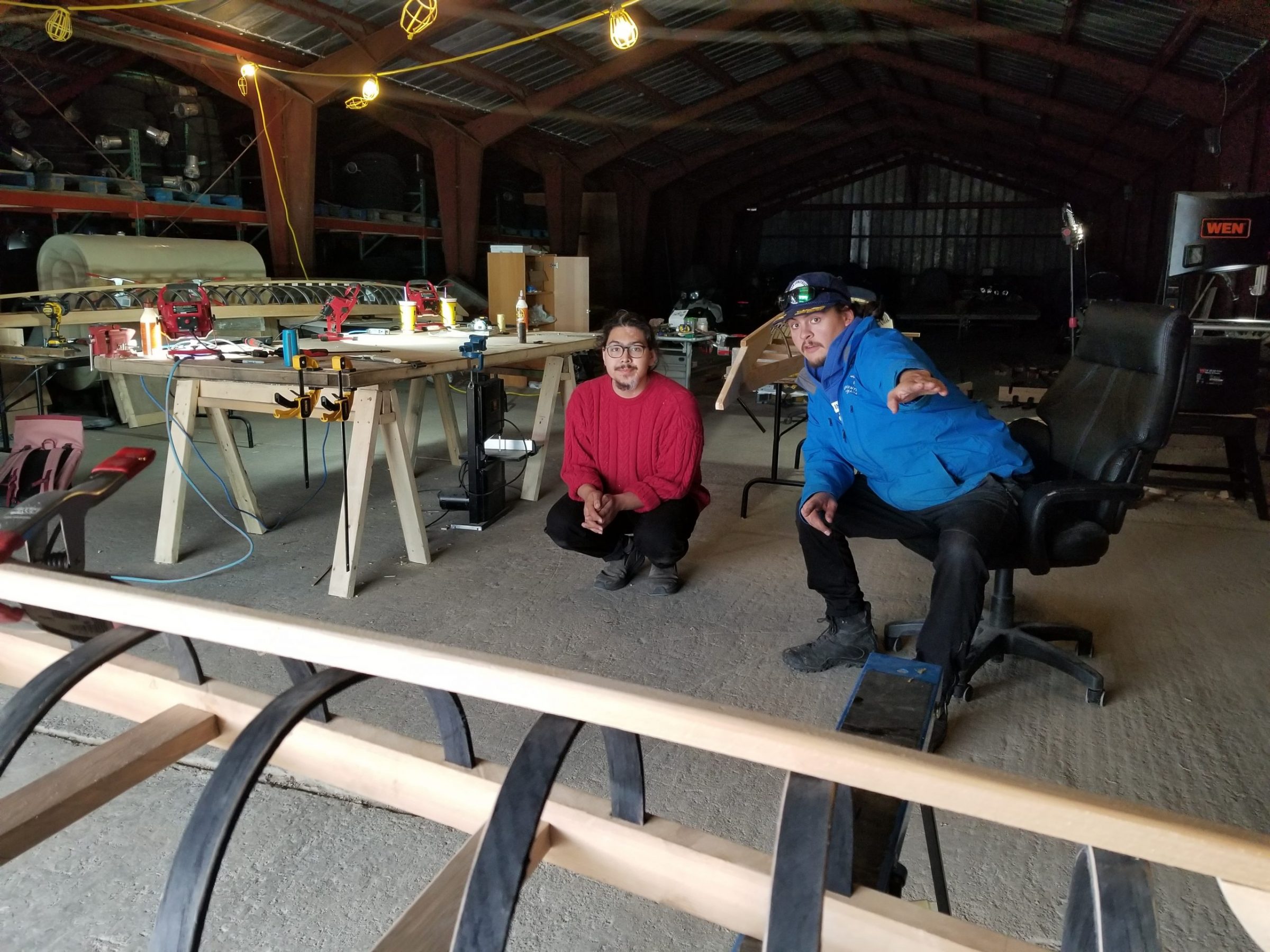 Aasivak Arnaquq-Baril (left), the initiator of a qajaq-building project, and Robert Comeau, one of the instructors, look over one of the traditional Inuit hunting boats under construction. (Photo by David Venn)

As the afternoon shifts into the evening in Iqaluit, Aasivak Arnaquq-Baril heads to his workshop instead of winding down for the day.

He wants to continue a project he has become passionate about: building his own qajaq.

A qajaq, or qajait when plural, is a traditional Inuit hunting boat. This is Arnaquq-Baril’s first time making one.

“It’s been awesome,” he says of the experience.

Arnaquq-Baril, 20, is making qajait as part of an initiative from Ilitaqsiniq, also known as the Nunavut Literary Council.

The initiative is called the Ikajurniq youth community volunteer program. Funded through the federal government, Ikajurniq encourages Inuit ages 13 to 25 years old to create a project that benefits their community while completing 120 hours of volunteer work.

For Arnaquq-Baril, an employee with Ilitaqsiniq who is enrolled in Nunavut Arctic College’s environmental techology program this fall, that goal was to create a workshop for building qajait in the community. He is joined by his cousin, Mosesie Pitsiulak, 19, and Luke Cornthwaite, 20, who are also making their own qajaq.

They are taught by three instructors who have experience in building qajait. 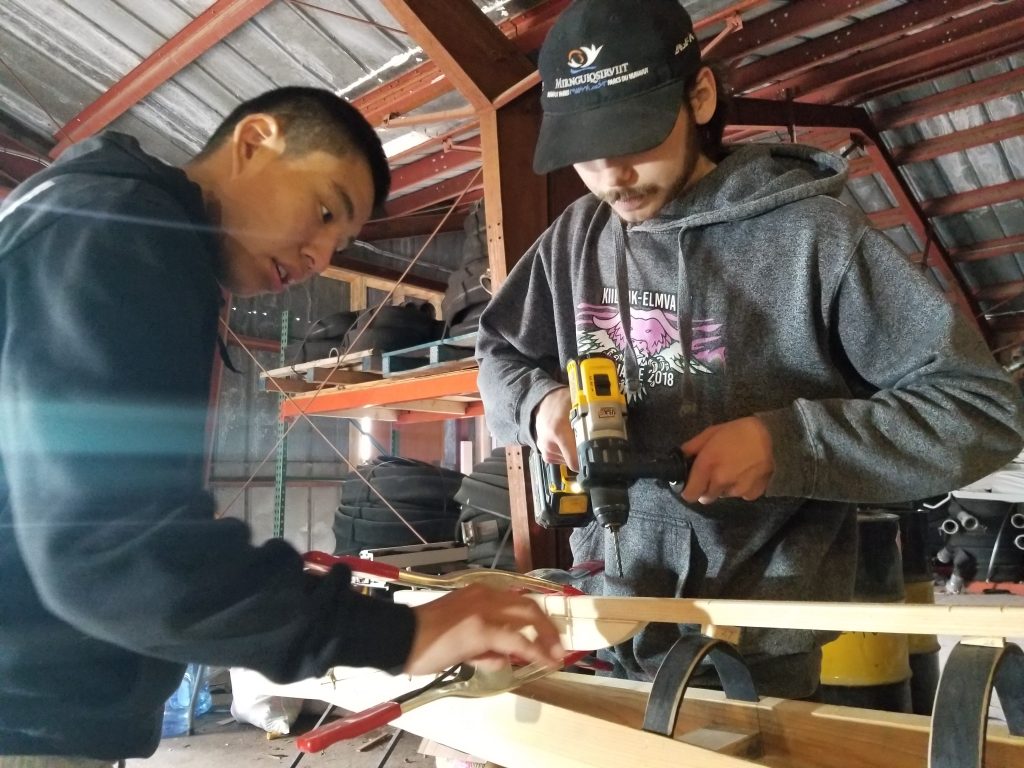 From left: Mosesie Pitsiulak and Luke Cornthwaite put pegs on the boat. (Photo by David Venn)

One of Arnaquq-Baril’s motivations for making qajait stems from living away from Iqaluit for a few years and feeling less connected to his Inuit culture. Between the ages of 14 to 16 he lived France, and between 16 to 18 he lived in Ottawa before returning to Iqaluit.

“It’s been really nice to explore that side of myself with family and in a way that I can connect to my forefathers, by building something they would’ve built,” Arnaquq-Baril said.

Qajait are narrow boats built with few materials. They are typically two to three times the length of the person riding them. Traditionally they are made with a frame of driftwood wrapped with the skin of a bearded seal.

Arnaquq-Baril and the group have built their qajait with a mixture of cedar and white oak for the wooden frame and a ballistic nylon for the skin. A polyurethane varnish is then coated on to make it well sealed.

To ensure the boat moves well through the water, the skin needs to be sewn tight.

“People say that you can tap on the skin and it sounds like a drum,” said Arnaquq-Baril.

“That’s how tight it is on the frame.”

The most documented style of qajait is the Western Greenland style, according to Arnaquq-Baril. This is a narrower, shorter qajaq and is the type being made in Arnaquq-Basil’s workshop.

“A lot of people, including some of the instructors, say that it’s the pinnacle of Inuk qajaq making,” Arnaquq-Baril said.

Arnaquq-Baril would like to build a traditional south-Baffin style qajaq one day. He said the that style qajaq is bigger, longer and not symmetrical.

Qajait have had a serious impact on the global history of boating, as every kayak a person uses today originates from the qajaq, said Robert Comeau, one of the instructors.

“People from around the world will forever say kayak, but Inuit take lot of pride in the fact that we invented qajait,” he said. 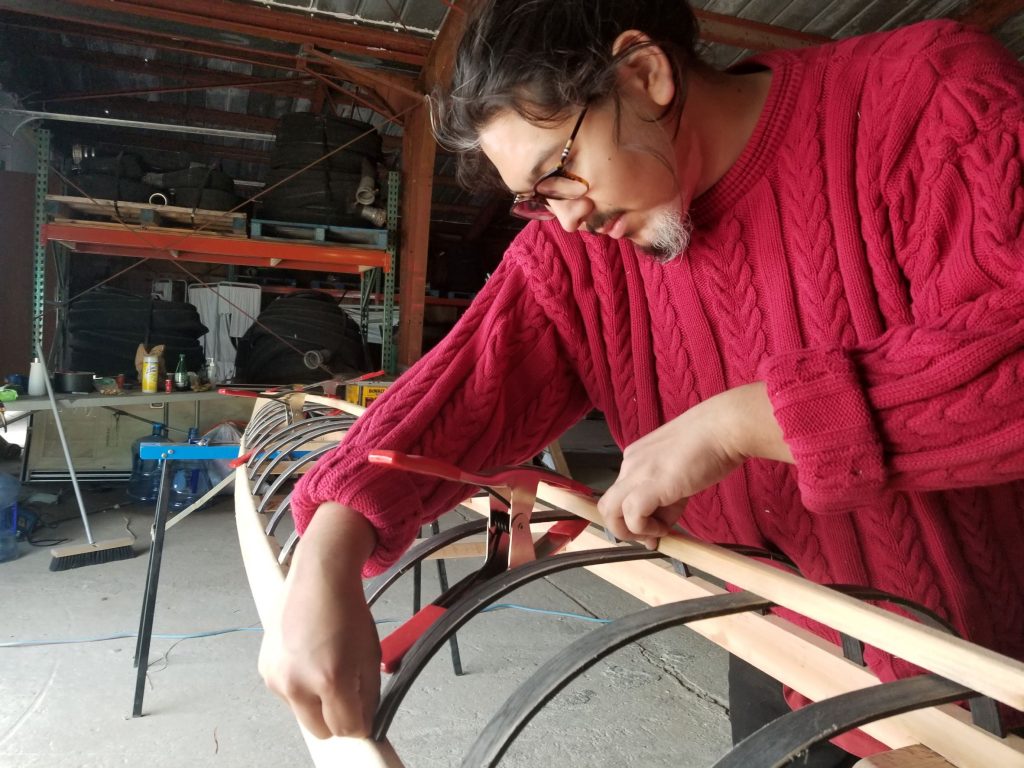 The challenges for building qajait have been less about making the actual boat and more about organizing the workshop, Arnaquq-Baril said.

Tasks like finding a warehouse to work in, what wood is needed for ordering or how to get safety training for riding a qajaq have been some of the more pressing obstacles.

The first challenge was getting funding for the project, but with Ilitaqsiniq’s Ikajurniq initiative, that problem was solved.

“It’s to get young people to see that their ideas are possible but to give back to your community as well,” Jesse Unaapik Mike, project director at Ilitaqsiniq, said about the Ikajurniq program.

The qajait-building initiative has indeed been about more than crafting boats, as Arnaquq-Baril and Comeau say all members of the workshop have bonded as friends, family and men of similar heritage.

“We’re all Inuit men teaching other Inuit men,” Comeau said, adding that he is glad Arnaquq-Baril reached out about running the program.

Arnaquq-Baril said it’s great watching his team’s confidence grow. He hopes the qajait will be finished and ready for their first paddle either by this Sunday or Monday. Currently, they are finishing off the skinning of the boat.

With so many hours and plenty of effort being taken to accomplish this project, Comeau said he is excited to finally see Arnaquq-Baril and his friends out on the water. He adds it will be a great achievement for them to share with family and friends.

“I can’t wait to see the look on the guys’ faces.”