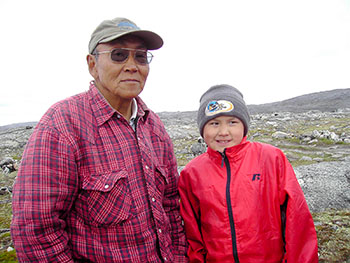 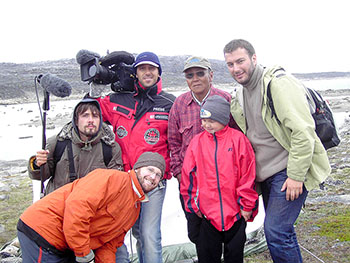 Lucassie Napaaluk and his grandson Peter, both of Kangiqsujuaq, stand with Greg Hemmings, bottom left, and the members of the film crew who visited their community in 2007 to produce a documentary for an Italian television network. (PHOTO COURTESY OF G. HEMMINGS)

People around the world will have the chance to see Lucassie Napaaluk of Kangiqsujuaq, his father, Naalak, and his grandson, Peter, in a short, award-winning documentary called “Papikatuk.”

The film, intended to show how global warming is affecting Inuit, follows an eight-year-old Inuit boy (called Papikatuk in the film) as he learns about traditional ways of living off the land from his grandfather.

Greg Hemmings, a filmmaker from Saint John, New Brunswick, recently received the Commonwealth Vision Award in London for the film.

Competition for the award was open to filmmakers up to age 35 from 53 Commonwealth countries.

Thanks to its win in the competition, the film will be broadcast internationally— and even passengers on Air Canada flights will be able to see “Papikatuk” on its selection of in-flight short films.

On the internet, Papigatuk can be downloaded at http://vimeo.com/4914156

The theme of the 2009 Vision Awards, jointly organized by the Royal Commonwealth Society and the Commonwealth Broadcasting Association, was global change.

And that’s what Hemmings said he and an Italian film crew hoped to capture when they first went to Kangiqsujuaq in 2007 to work on “Melting Lands,” a longer documentary for an Italian television network.

In an interview with the Nunatsiaq News, Hemmings said he and the crew, who spent a total of one month in Kangiqsujuaq, were proud to tell “a little bit of the Inuit story” to the global audience.

But, in trying to tell this story, Hemmings said it was important to strike a relationship with people in the community before filming any action.

“Making documentaries can go either way. Some crews can go up and selfishly get what they want and they leave. There are ethical issues there,” he said.

The voice-over in the film is the one non-local aspect of “Papikatuk.”

When Hemmings was unable to find an Inuk living near Saint John who would be able to provide the final voice-over for the film, a young Micmac from Nova Scotia filled in as the narrator.

Hemmings said he hopes that the only people who will be aware of this are the people of Kangiqsujuaq.

Hemmings has sent copies of “Papikatuk” to Kangiqsujuaq— and he said that if he could afford the airfare, he would have liked to come himself to screen it in the community.