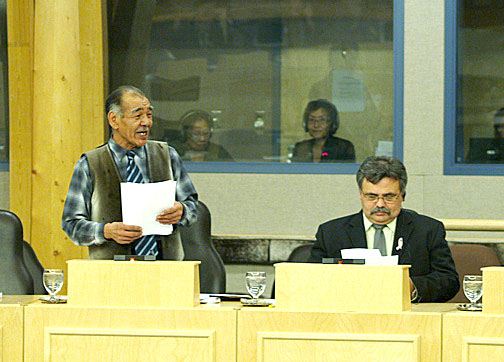 Tapardjuk had been expected to table the Government of Nunavut’s implementation plan for the Official Languages Act and Inuit Language Protection Act during the current legislative session.

But Tapardjuk told the house Oct. 26 that plan has been delayed while the GN gathers more information about the “linguistic capacity of our public service” and consults with other GN departments about how to roll out the plan.

Tapardjuk said the GN plans to table a plan during the winter sitting of the assembly, scheduled for late February.

In a scathing joint news release issued by the Office of the Languages Commissioner, Nunavut Tunngavik Inc. and the Qikiqtani Inuit Association, Languages Commissioner Alexina Kublu said the government was already violating the two acts by failing to issue an implementation plan by March 31, 2010.

“The minister of languages is failing his duty to Nunavummiut,” Kublu said. “The minister was legislatively bound to table the implementation plan by March 31, 2010. He has not done so.”

Acting NTI president James Eetoolook said the acts need to be implemented immediately because of a 10-per cent drop in household use of Inuktitut between 1996 and 2006.

“The time to act is now,” Eetoolook said. “It is very worrying that the very minister who had such a large part in passing (the) OLA and ILPA only two short years ago is now failing to meet the provisions set out in the legislation he himself championed.”

“Any more delays, in effect, will shelve a much-celebrated legislation,” she said.