“Even though I feel quiet … my voice is still heard” 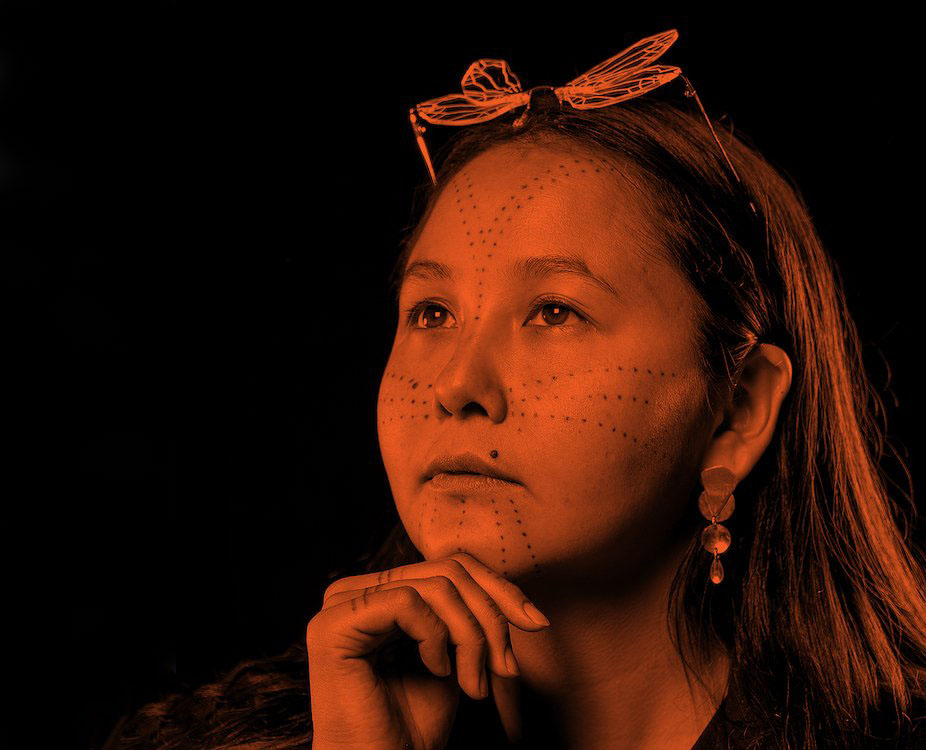 Asinnajaq is one of 25 visual artists selected to share the prestigious Sobey Art Award in 2020. (Photo by Patty Tyrell/ Courtesy of the Sobey Art Award-National Gallery of Canada)

Asinnajaq, a 28-year-old Inukjuak-born, Montreal-raised Inuk filmmaker, visual artist, writer and curator, is among the 25 recipients of the 2020 Sobey Art Award.

“I was incredibly surprised to have been nominated, and now to be selected as a recipient I feel really happy,” Asinnajaq told Nunatsiaq News on Wednesday, April 15, not long after learning of her selection.

“I feel supported and recognized. I think my gestures in my artistic practice are quiet, and it is incredible to know that even though I feel quiet that my voice is still heard.”

Due to the COVID-19 pandemic, the Sobey Art Foundation and the National Gallery of Canada changed how they distributed the award, which is given annually to an artist, 40 or under, who has exhibited in a public or commercial art gallery within the previous 18 months.

“In the spirit of providing financial support to visual artists in Canada at a time when they need it the most, and when opportunities to generate income are limited,” the overall 2020 Sobey Art Award has been divided equally among 25 finalists, each of whom will receive $25,000, the April 15 awards announcement said.

Asinnajaq, whose family hails from Inukjuak, is a graduate of Halifax’s Nova Scotia College of Art and Design.

“I’m really excited to have my work supported. It means a lot to me to be a part of such an amazing culture like the one that Inuit have built. I hope that I can continue to make art for a long time and that I will make work that Inuit can take pride in,” Asinnajaq said.

Asinnajaq has worked for the National Film Board. That’s where she mined old stock footage and documentaries shot in the North to piece together her acclaimed short film, Three Thousand, which features a blend of animation and live-action scenes.

The film won the Best Indigenous Short Film Award at the 2018 Skábmagovat Film Festival in Inari, Finland. It was also nominated for Best Short Documentary at the 2018 Canadian Screen Awards by the Academy of Canadian Cinema and Television.

Her other recent projects include a multimedia project with Isuma filmmakers Zacharias Kunuk and Norman Cohn for the 2019 Venice Biennale and the curation of the inaugural exhibitions at the Winnipeg Art Gallery’s Inuit Art Centre, which is scheduled to open this year, in collaboration with Heather Igloliorte, Krista Zawadski and Jade Nasogaluak Carpenter.

Asinnajaq now lives in the Mile End neighbourhood of Montreal, where she said, “I think now is a good time to do research and collect myself.”

“There are a few ideas I’d like to pursue like making more performance videos, said Asinnajaq, who is the daughter of educator Carol Rowan and filmmaker Jobie Weetaluktuk.

“I’ve been working on illustrations, on research and a new documentary.”

Asinnajaq is the fifth Inuit artist to make the long list for a Sobey award. The late Annie Pootoogook was nominated in 2002, and then won the prize in 2006. Mark Igloliorte was longlisted in 2012 and Couzyn van Heuvelen in 2018. Kablusiak was shortlisted in 2019.