Some elders can’t read candidate and party names on ballots 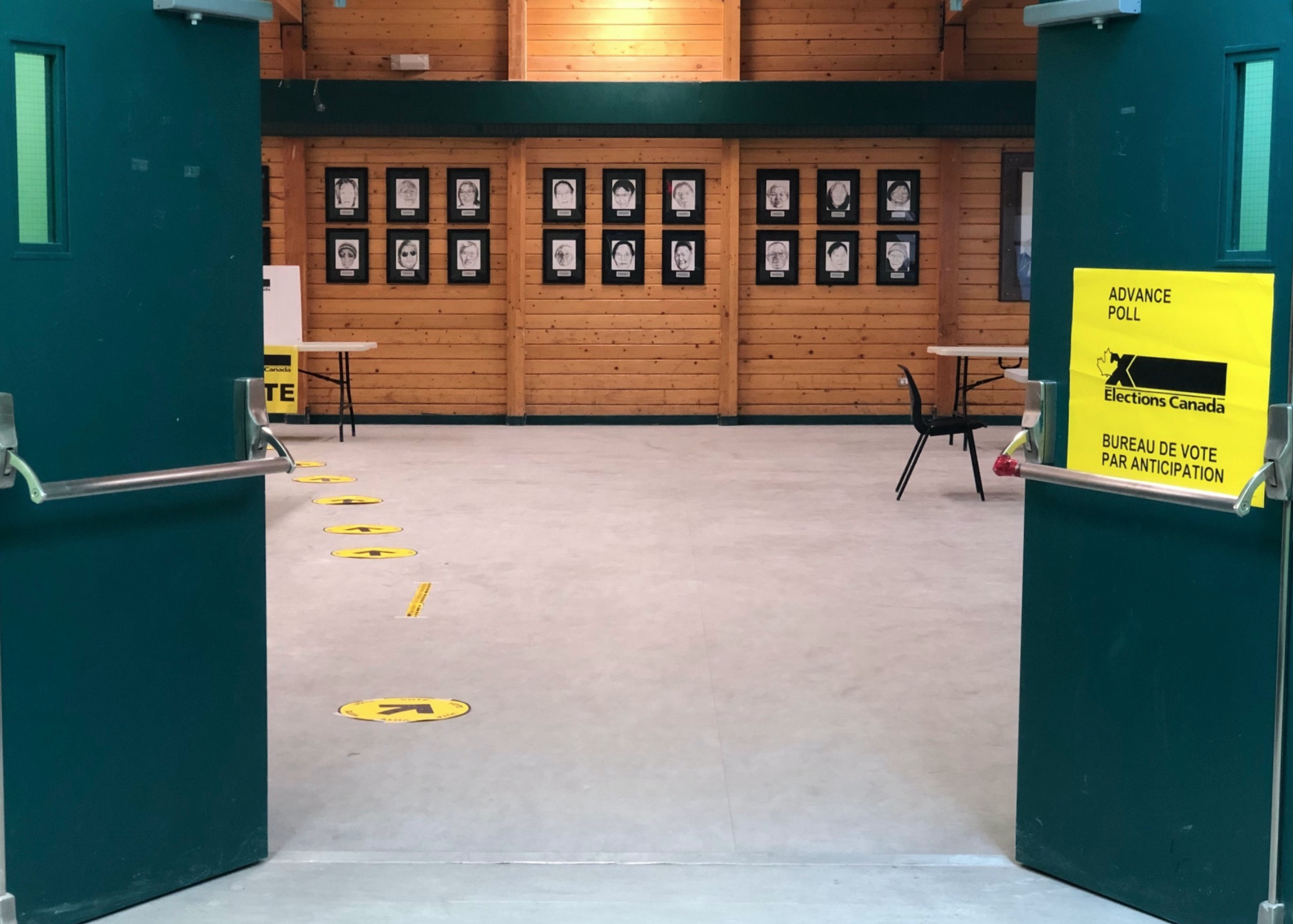 French and English translations can be seen on signage at a polling station set up in Cambridge Bay during the 2019 federal election. (Photo by Jane George)

Nunavut MP Mumilaaq Qaqqaq is looking to get Indigenous languages included on voters’ ballots in the next election — something the territory’s languages commissioner says Elections Canada should do if it is committed to reconciliation.

“If Elections Canada wants to show their respect for Nunavummiut’s right to vote, [they] would show their recognition of Nunavut’s official languages by having Inuit languages on the ballots,” said commissioner Karliin Aariak.

“There are unilingual Inuit language speakers, let’s recognize that,” she said, adding the majority of Nunavut’s population speak Inuit languages and write in syllabics.

Aariak noted Section 13 of the UN Declaration on the Rights of Indigenous Peoples, or UNDRIP, says countries need to make sure Indigenous peoples can understand political processes.

The federal government committed to implementing UNDRIP in 2020. On Tuesday, legislation to do that, Bill C-15, was adopted in the House of Commons and will next be seen by the Senate.

Nunavut’s Official Languages Act lists the territory’s Inuit languages — including Inuktitut and Inuinnaqtun — as official languages, alongside English and French. It also says they should have equal footing and rights as the other two.

Elections Canada allows people who don’t speak English or French to bring a helper to interpret for them while voting and there are often Inuktitut-speaking staff at local polling stations, but Aariak said in small communities, it could be a discouragement for people to vote if they can’t keep who they’re voting for private.

Aariak said her office has received language rights-related complaints about Elections Canada in the past.

Natasha Gauthier, an Elections Canada spokesperson, said the agency is not aware of any complaints made to the commissioner about services to Inuit in the 2019 election.

In the 2019 election, Elections Canada translated its voting guide, a list of acceptable forms of identification and voter information cards into Inuktitut, Gauthier said.

The four different TV ads had an Inuktitut voiceover with English visuals. Writing in the ads like “it’s our vote,” “federal election” and the date of the federal election were in English.

Gauthier said a real-time translation service is available for employees at polling stations through CanTalk, to interpret between the employee and the voter, but voters cannot contact a CanTalk translator directly.

In terms of ballots, as a federal agency, Elections Canada needs to go by Canada’s Official Languages Act, which says all Canadians have the right to vote in English or French.

On Tuesday, Qaqqaq met with the Grand Council of the Cree, the Association of First Nations and the Metis National Council to get feedback on the idea and those meetings will be ongoing, Mathieu Boisvert, Qaqqaq’s personal assistant, said in an email.

Qaqqaq said, “if we are going to be included in the democratic process we need to have as many people involved as we can.

She said about 60 per cent of those in her riding speak Inuktitut and she hopes including the language on ballots will help increase voter turnout in the territory.

In the 2019 election, voter turnout in Nunavut was 48 per cent, according to Elections Canada. This was the lowest compared to all other provinces and territories in Canada.

On average 67 per cent of those eligible to vote across the country filled out ballots in 2019, according to Elections Canada.

Qaqqaq said comments about syllabics not being included on the ballots came up often in the last election.

She said some elders told her they weren’t sure they understood the names of the candidates on their ballots when they went to vote.

One of the reasons for this, she said, is they are seeing candidates’ names in Inuktitut on Igalaaq — CBC News’ Inuktitut daily news program — then, at the polls the names are written in English.

She is still ironing out the details, but Qaqqaq said the initiative could take the form of a pilot project in communities with high numbers of Indigenous language speakers. She is also considering tabling a private member’s bill in the House of Commons.

“The excuse is always time and money,” said Qaqqaq. “That shouldn’t ever be an excuse when it comes to reconciliation.”