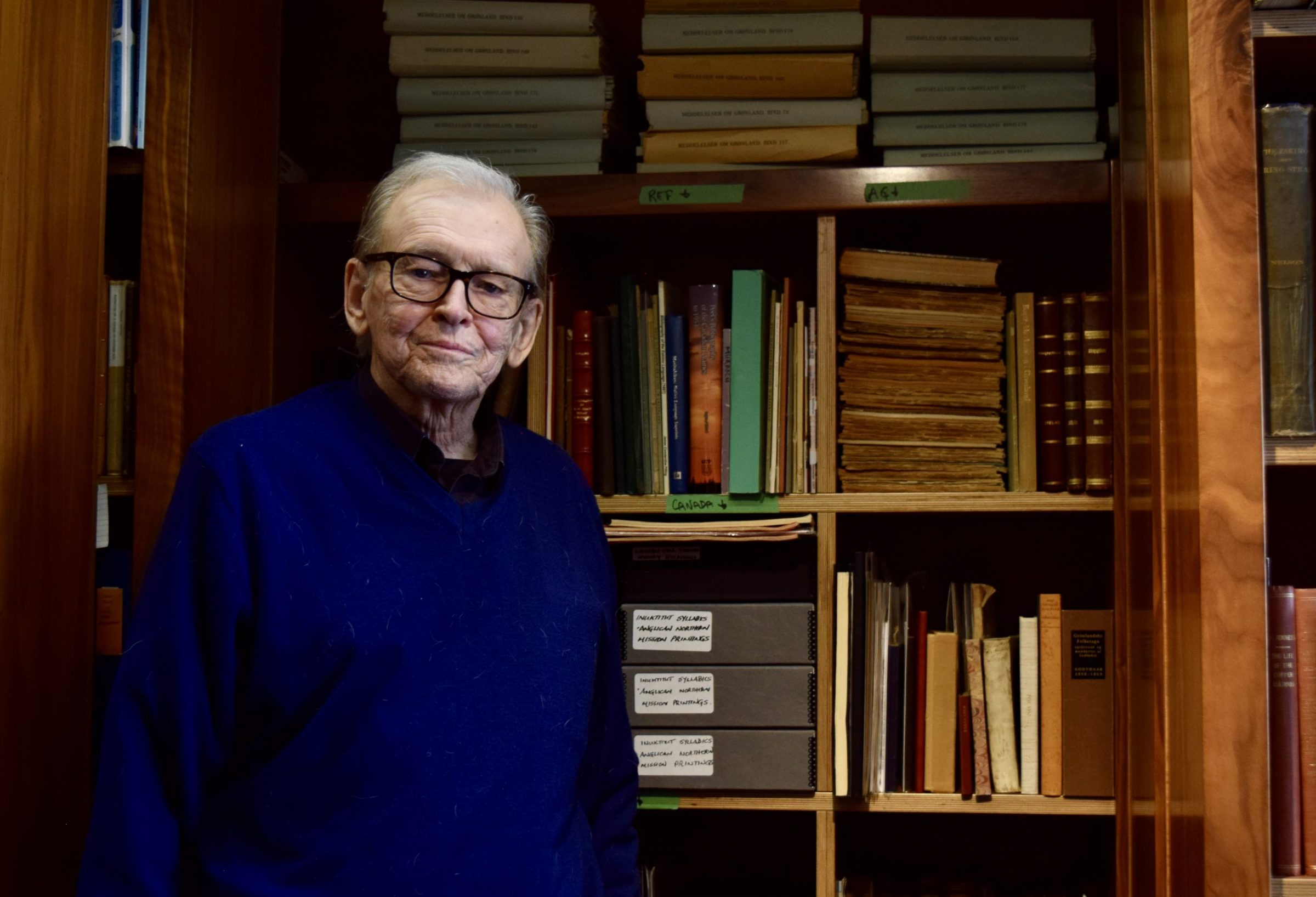 In Those Days: Inuit and Explorers is the fifth book in a series about Arctic history by Kenn Harper, pictured here in his Ottawa office. The writer and historian grouped together stories from his “Taissumani” columns in Nunatsiaq News that highlight the invaluable contributions of Inuit to the European explorers that came to the Arctic. (Photo by Madalyn Howitt)

When Kenn Harper was writing the stories in his latest book about Arctic explorations, he had a specific goal in mind.

He wanted to name the Inuit who were invaluable in adding to Western knowledge of the Arctic.

Inuit and Explorers is the fifth volume in the In Those Days: Collected Writings on Arctic History book series from Inhabit Media, an Inuit-owned, independent publishing company in Iqaluit.

Harper, a writer, linguist and historian, said he was compelled to write the series after revisiting Eskimos and Explorers, a decades-old book in which only five Inuit subjects are referred to by name, compared to dozens of European explorers who are.

“I thought that’s kind of ridiculous,” he said from his home in Ottawa, where he has lived since 2015.

“If you’re trying to show the interrelationship between the dependence of the explorers on the Inuit, you shouldn’t miss the names.”

Each book in Harper’s series is based around a theme — the first four focus on Inuit lives, justice, whaling and belief systems, respectively.

In Inuit and Explorers, Harper describes the pivotal roles Inuit played in the expeditions of European explorers who came to the Arctic, serving as guides, clothing makers, and interpreters.

“It’s an attempt to give Inuit their due and recognize the contributions of the Inuit to Arctic exploration, bringing them to the foreground of the story as much as possible, and name them,” said Harper.

All of the stories in the In Those Days series are collected from Harper’s “Taissumani” columns, a long-running series on Arctic history that runs biweekly in Nunatsiaq News.

The Northwest Passage, the doomed John Franklin Expedition and the Inuit who played pivotal roles in these adventures feature prominently in the essays. Some have been revised with new information and photographs since they were first published.

“I’m not trying to denigrate the explorers. Most of them were capable, but they needed the Inuit because of their familiarity with the land and the language,” Harper said.

“There was a dependence … on the Inuit for hunting and providing their sustenance and dependence on the requirement for their seamstress abilities in particular, to keep Arctic clothing in good shape.”

Harper said he particularly enjoyed writing about Hannah and Joe, two figures that feature prominently in “A Fortuitous Meeting: Tookoolito and Ipiirvik, and Charles Francis Hall.”

The two were young teenagers in the 1850s when whaling “was just getting going” in Cumberland Sound, Harper said.

They were taken to England for two years in the 1850s, were married, and later met Charles Francis on the first of his three Arctic expeditions. They worked with him on all three of his Arctic expeditions, and in between lived in various places across North America.

“They’re among the first historic Inuit that I ever heard of when I moved to the Arctic well over 50 years ago now,” Harper said. “I lived in some of the areas where they were and their story is just so compelling.”

Harper spent 50 years living in Nunavut, working first as a teacher in various communities and later as a business owner — he owned Arctic Ventures for 28 years — but said writing about the Arctic was always of great interest to him.

“You need to write what you know, so what I know is the Arctic and some of its history,” Harper said.

“The more I learn, the more I realize how little I know and how vast the field is, and how much more there is to know. Studying and researching northern history is a kind of humbling experience in that sense. You’re always realizing that even though other people may say you’re an expert you realize that you’ve only scratched the surface.”

He shared that when he was living in the North, it was very “gratifying” when fellow residents would approach him and share their personal connections to his research.

“[People] would come up to me on the street, or in a store or in an airport and say, ‘Hey, I read that article you wrote recently about so-and-so, and it was really interesting because he was my grandfather.’ Things like that are very gratifying.”

In Those Days: Inuit and Explorers will be available on March 15 from Inhabit Media.