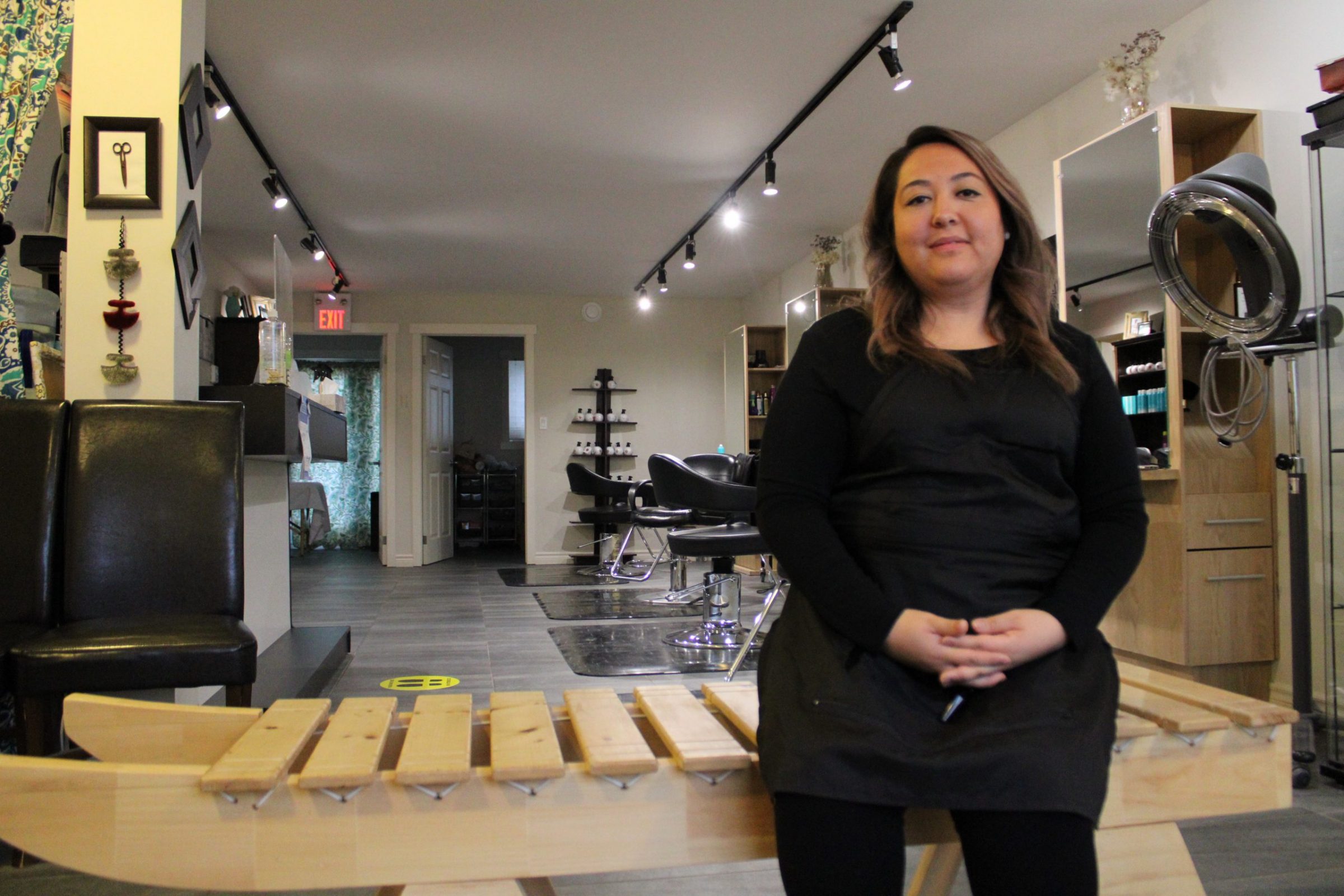 Jennifer Lindell, owner of Jenn87 Hairstyling, sits in her salon during a slow afternoon in October. Lindell had to temporarily stop offering hair dyeing, a service that makes up most of her business’s revenue, due to the water emergency in the territory’s capital. (Photo by David Venn)

Jennifer Lindell says she began noticing something unusual while dyeing her clients’ hair in early October. Hair would get warm, then hot, and scalps would end up with burns if they weren’t washed quickly enough.

Hairstylist Jennifer Lindell says some of her clients experienced burns on their scalps during colouring treatments in early October, when people in the city were unknowingly using water contaminated with fuel. Since then, Lindell said she is working closely with each of her customers to determine if it is safe to dye their hair. (Photo courtesy of Jennifer Lindell)

Lindell, owner of Iqaluit’s Jenn87 Hairstyling, contacted her supplier to see if there were any problems with the colouring products she was using. Then she asked her clients who experienced the discolouration to list the hair products they use at home.

Meanwhile, she recalls, Facebook posts about the city’s tap water smelling like petroleum were in the back of her mind.

“But the city reassured us over and over again that the water was safe and that there was nothing wrong with the water. It was tested,” she said. “So we put our trust in that.”

By Oct. 12, fears that there was fuel in the water were confirmed. Officials told people to stop drinking it, and a do-not-consume order has been in place since.

Some Iqaluit entrepreneurs, who have already suffered a COVID-19 lockdown earlier this year, worry about the consequences to their businesses as the water emergency moves into its eighth week.

Water is available to people in Iqaluit from the river, through trucked water services, in bottles, and through the Canadian Armed Forces water filtration system. The city also offers to drop water off daily for businesses, but Lindell said she declined the offer.

“The chemical reaction is happening in the chair before I even use water. So there’s already build-up in the hair,” she said.

Lindell temporarily stopped offering colouring services, which accounts for most of her business’s revenue, in mid-October. She has since started dying hair again, but only after working with each of her clients to see what condition their hair is in and deciding whether or not it’s safe to do so.

Lindell estimates she lost between $900 to $1,350 each day she didn’t offer the service.

Her clientele is loyal, she said, and that’s kept her business afloat. But Lindell said she’s facing the prospect — after not getting any financial support from government or organizations — of having to temporarily close down Jenn87.

“I’ve had my business for 15 years and I’ve always figured out a way to get through anything,” she said.

Last week, the company received test results for 58,000 litres of water it had stored, said general manager Jason Oldham. But by then, the water had been used to clean the facility, rather than brew more beer.

The company also had 10,000 litres of beer stored, which also tested clean for petroleum contamination, he said.

“My worst concern was we had $150,000 of beer sitting there, that if the testing came back that it had contamination, it was just going to get dumped,” Oldham said.

Nunavut Brewing also didn’t sign up to have water delivered to its door daily, because Oldham said management wanted the water to go to residents, not brewing.

Now, the bar’s kegs are almost empty and the brewery is down to its final litres of packaged beer. Oldham says if Nunavut Brewing runs out of beer before the water emergency is over, it will cost the company about $10,000 per week in sales.

“It’s been really hard. We’ve tried to pivot and find ways to keep ourselves going, but it’s hard to make money when you’re shut down for a full quarter of the year, two years in a row,” Oldham said, referring to the water emergency and the COVID-19 pandemic.

Things are a bit better over at Tundra Take-Out and Diner, where manager Patricia Hubley says staff have been making do despite the challenges.

The restaurant, which is part of Arctic Co-operatives Limited, has been using bottled water to make its sauces, she said.

It isn’t serving salads or chili because of the amount of water it takes to prepare these meals. Slushies, fountain pop and coffee are also off the menu — this has been the biggest money-loser, Hubley said.

But when customers can’t get a pizza and pop combo, or a morning coffee, this hasn’t seemed to be an issue.

There is no official timeline for when Iqaluit’s residents will be able to drink their water again, but the Government of Nunavut has set out a list of eight requirements the City of Iqaluit must meet for the do-not-consume order to be lifted.

Neither the city or the territorial government have answered exactly how far along the city is in completing these requirements, but some significant milestones have been reached in the last few weeks: the source of the contamination has been removed, a monitoring system has been put in place, and it’s been more than a month since the city has published any water test results that show detectable petroleum.

The Health Department has also been sampling city water, but has yet to release its data in full. Officials with the department say its in the works, but haven’t offered a timeline.