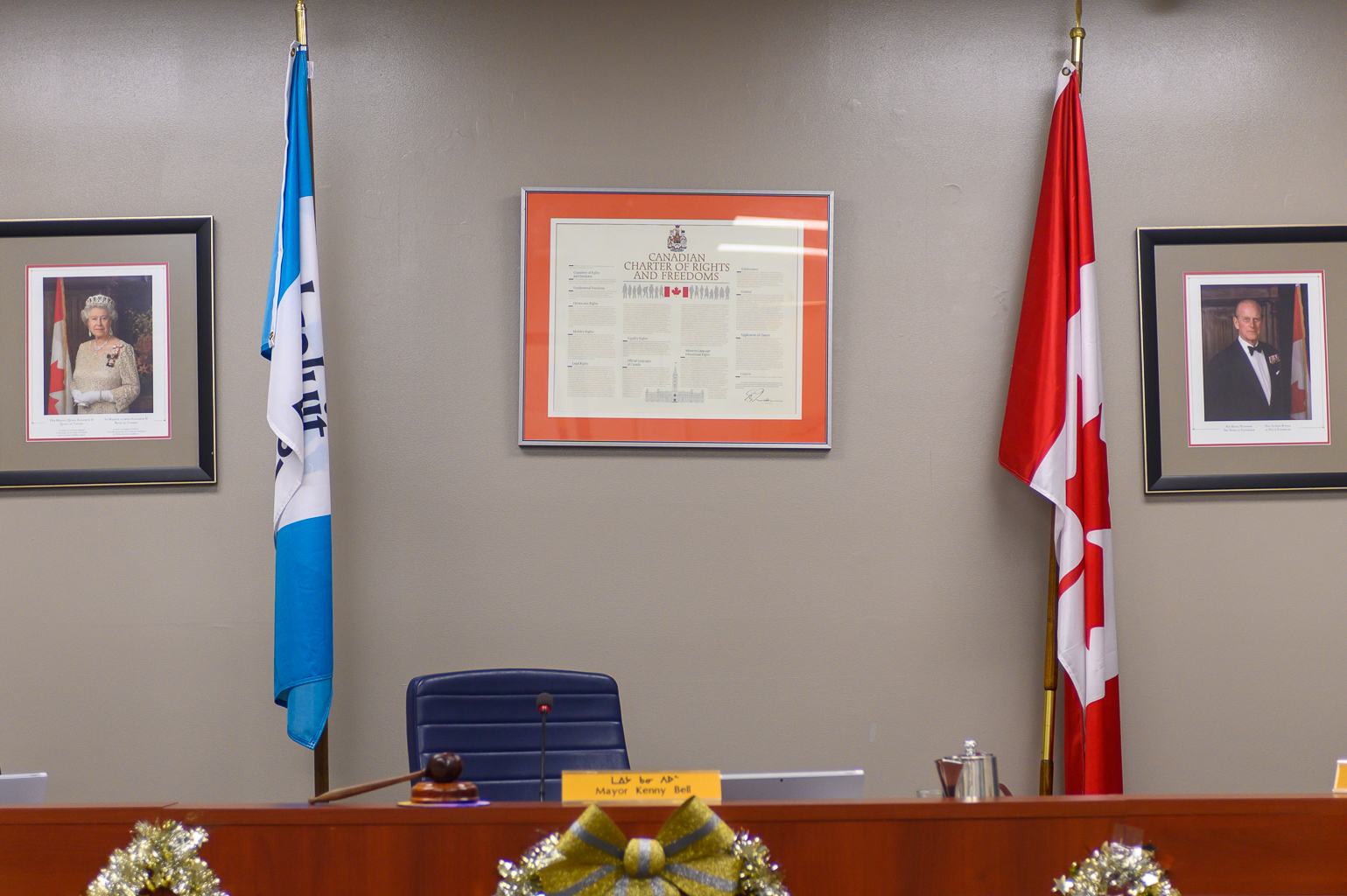 The Canadian Charter of Rights and Freedoms hangs in the centre of the Iqaluit City Council chamber on Dec. 10. “It’s settled law in Canada. The act of praying before a municipal meeting is illegal and is a violation of the charter that hangs on our wall right here,” said Coun. Kyle Sheppard during Tuesday night’s meeting. (Photo by Dustin Patar)

For many decades, Iqaluit municipal council meetings, like public meetings everywhere in Nunavut, opened with a prayer. Last night, that practice came to an end.

By the conclusion of the Dec. 10 meeting, Iqaluit city council had voted four to three in favour of replacing the opening prayer with a moment of silence—a first for Nunavut.

“This is a matter of equality, it’s a matter of inclusion. It’s not a religious debate, it’s not a discussion of the merits of prayer, it’s settled law in Canada. The act of praying before a municipal meeting is illegal and is a violation of the charter that hangs on our wall right here,” said Coun. Kyle Sheppard, who alongside councillors Romeyn Stevenson, Joanasie Akumalik and Janet Brewster voted in favour of the change, with councillors Solomon Awa, Malaiya Lucassie and Simon Nattaq voting against it.

In April 2015, the Supreme Court of Canada ruled that praying before a municipal council meeting violates an individual’s freedom of religion and conscience.

Shortly after, then Coun. Kenny Bell brought a motion to the city council to remove the opening prayer and replace it with a moment of silence.

The motion was defeated by three votes to two and the council moved on.

Although Tuesday’s meeting began with Nattaq leading a prayer, it was only the first time that he has done so during the new council’s sitting.

During Nattaq’s absence at the first meeting, Mayor Kenny Bell opted for a moment of silence and during the second council meeting, Deputy Mayor Janet Brewster opted for a reflection.

“When we start our meetings with a prayer it’s stressful for me,” said Brewster during last night’s discussion, which was initiated by Nattaq.

“It’s not any judgment on anybody’s choice of religion or freedom for religion. It stems from my experience with working at the Aboriginal Healing Foundation.”

An emotional Brewster then spoke about listening to the stories of residential school survivors being made to pray many times a day.

“In this space [city council] if I get up and walk out, then I feel like I’m disrespecting those of you who are choosing to pray. Whether or not that’s the intent or whether or not you accept that I get up and want to leave, the impact is still that I am drawing attention to myself and my beliefs. This is a very personal thing, and I don’t think it’s appropriate to do that here.”

Before introducing a motion to direct the administration to change any necessary bylaws by removing the word prayer and replacing it with a moment of silence, Sheppard read a portion of the reasoning shared by the Supreme Court for the decision that struck down the ability of municipalities to pray before meetings.

“By expressing no preference, the state ensures that it preserves a neutral public space that is free of discrimination, and in which true freedom to believe or not to believe is enjoyed by everyone equally, given that everyone is valued equally.… A neutral public space does not mean the homogenization of private players in that space. Neutrality is required of institutions and the state, not individuals…. On the contrary, a neutral public space free from coercion, pressure and judgment on the part of public authorities in matters of spirituality is intended to protect every person’s freedom and dignity.”

Coun. Stevenson then seconded the motion.

It was Akumalik who had the last word before the vote.

“Regardless if I have a moment of silence or prayer, my God is still going to love me.”

The next council meeting will take place on Jan. 14.