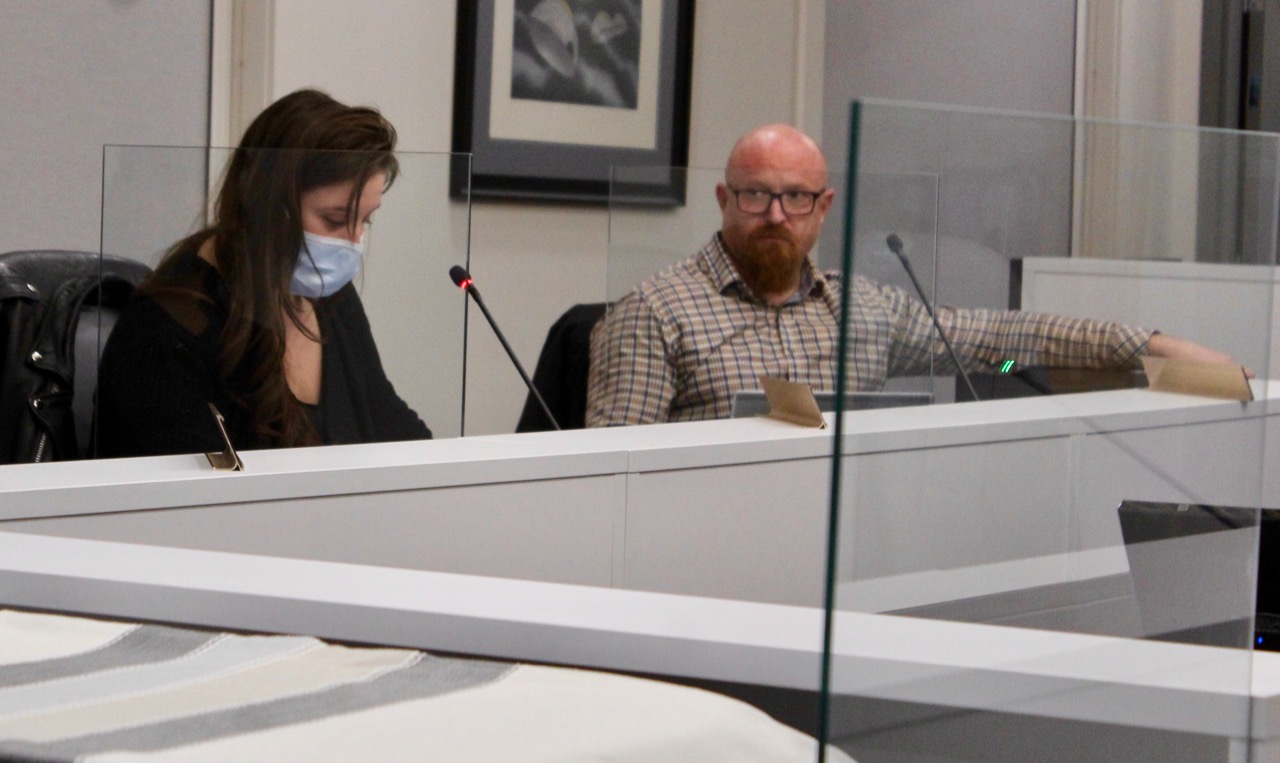 Coun. Kimberly Smith, left, speaks at an Iqaluit city council meeting on Tuesday, where she called out comments made by Coun. Paul Quassa about Pride at a previous meeting Monday night. Coun. Romeyn Stevenson looks on. (Photo by Emma Tranter)

An Iqaluit city councillor has filed a code of conduct complaint against one of her colleagues over a series of comments she says are homophobic.

During a discussion about roads on Monday, Coun. Paul Quassa raised the topic of rainbow crosswalks painted near the city’s schools.

“Not many Inuit are very happy about this idea out there,” he said in Inuktitut, through an interpreter.

“They just don’t want the kids to think like adults yet, while they are still kids.”

“Bigotry and homophobia have no place in our community, and certainly no place in these chambers,” Smith said.

“Unfortunately, discrimination persists, and I will not stand for it. Kids should never feel ashamed for being who they are. Nobody should.”

The city’s code of conduct bylaw for councillors states that council members can submit complaints about the conduct of a councillor directly to the city’s mayor.

Smith said Quassa violated sections of the bylaw that state councillors must “treat all members of the community honestly and fairly and in a way that does not cause offence or embarrassment to individuals or groups” and “respect the diverse nature of council and the citizens of Iqaluit.”

“I encourage anyone who wants to know the true meaning of Pride, to take the time to learn about this beautiful, accepting, and inclusive community, a community that I am proud to be a part of.”

In reply to Smith, Quassa said he was representing the concerns of his constituents when he made his comments Monday.

“Inuit wanted this brought up,” Quassa said in Inuktitut through an interpreter.

Quassa also said he did not intend to offend anyone with his comments and that he does not have concerns with LGBTQ rights or Pride itself.

According to the code of conduct bylaw, Mayor Solomon Awa will now investigate Smith’s complaint.

From there, Awa has several options: he can choose to bring both parties together to resolve the dispute, appoint a mediator, or ask the chief administrative officer to carry out a confidential code of conduct review.

According to the city’s bylaw, the mayor and rest of council have several actions available for dealing with a member found to have violated the code of conduct.

They range from issuing a reprimand or requesting an apology, to public censure or restricting that member’s access to city hall or another city facility.

In October 2020, Iqaluit city council unanimously called for the immediate resignation of Malaiya Lucassie over a comment she had put on Facebook regarding another person’s post on abortion and the Black Lives Matter movement.

Although Lucassie apologized for the comment, council ruled it was a violation of its code of conduct. Lucassie resigned that evening.