If all goes according to plan, the concert will happen in mid-June 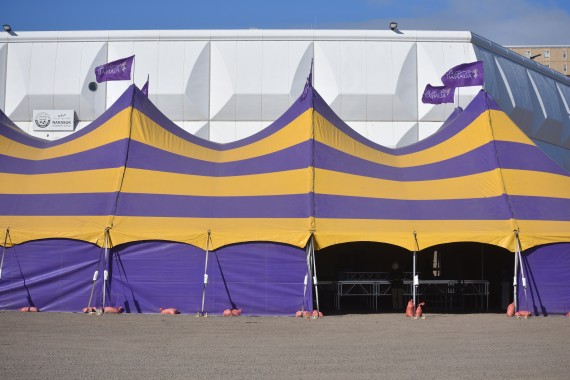 These purple and yellow tents housed performances for Iqaluit’s 14th annual Aliannait Arts Festival in June 2018 outside of Nakasuk School. This year, the organization is hoping to put on an outdoor drive-in concert for National Indigenous Peoples Day. (Photo by Courtney Edgar)

Iqalummiut may be able to look forward to an outdoor concert in mid-June, as city council backed a proposal by the Alianait Music Festival Thursday evening.

The concert is proposed to be a drive-in between 7:30 and 9:30 p.m. on either June 18 or 21 for National Indigenous Peoples Day. While Iqaluit is still in the midst of a COVID-19 outbreak that began in mid-April, plans for the concert have so far received the nod from public health officials.

“We really want this to happen,” said Alannah Johnston, executive director for Alianait. “And we are very confident that it could.”

Sylvia Grinnell Territorial Park, the Arctic Winter Games parking lot and the road to Tarr Inlet are among the potential venues, with Tarr Inlet being the best option, according to Johnston.

Tarr Inlet can fit approximately 120 cars with the potential to have space for ATVs as well, and has enough room for a stage float, she said.

There will be two or three bands, with a maximum of five musicians per band, and Alianait is working to broadcast the concert in a way besides on Facebook, either through radio or a broadcaster such as Uvagut TV, for people who can’t attend the concert.

In a unanimous vote, council agreed to support Alianait and will lend the parade float for a stage and provide some bylaw enforcement to make sure COVID-19 restrictions are obeyed.

“It’s really nice to see Alianait pulling something like this together,” said Coun. John Fawcett. “If you can pull it off, then it’s going to be a really positive thing for our community.”

Coun. Solomon Awa spoke to the safety measures that were in place, and wanted to make sure all possible steps could be taken, such as masks being handed out to the public and musicians being tested.

Johnston said mandatory testing was not part of Alianait’s safety plan, but that they could work with public health to make it happen, and that they could also hand out masks.

Alianait will also hire security and have attendees sign up for tickets through an online platform that can assist with contract tracing if necessary, Johnston said.

“They will only be moving forward with the approval of the [chief public health officer’s] office,” said Mayor Kenny Bell.