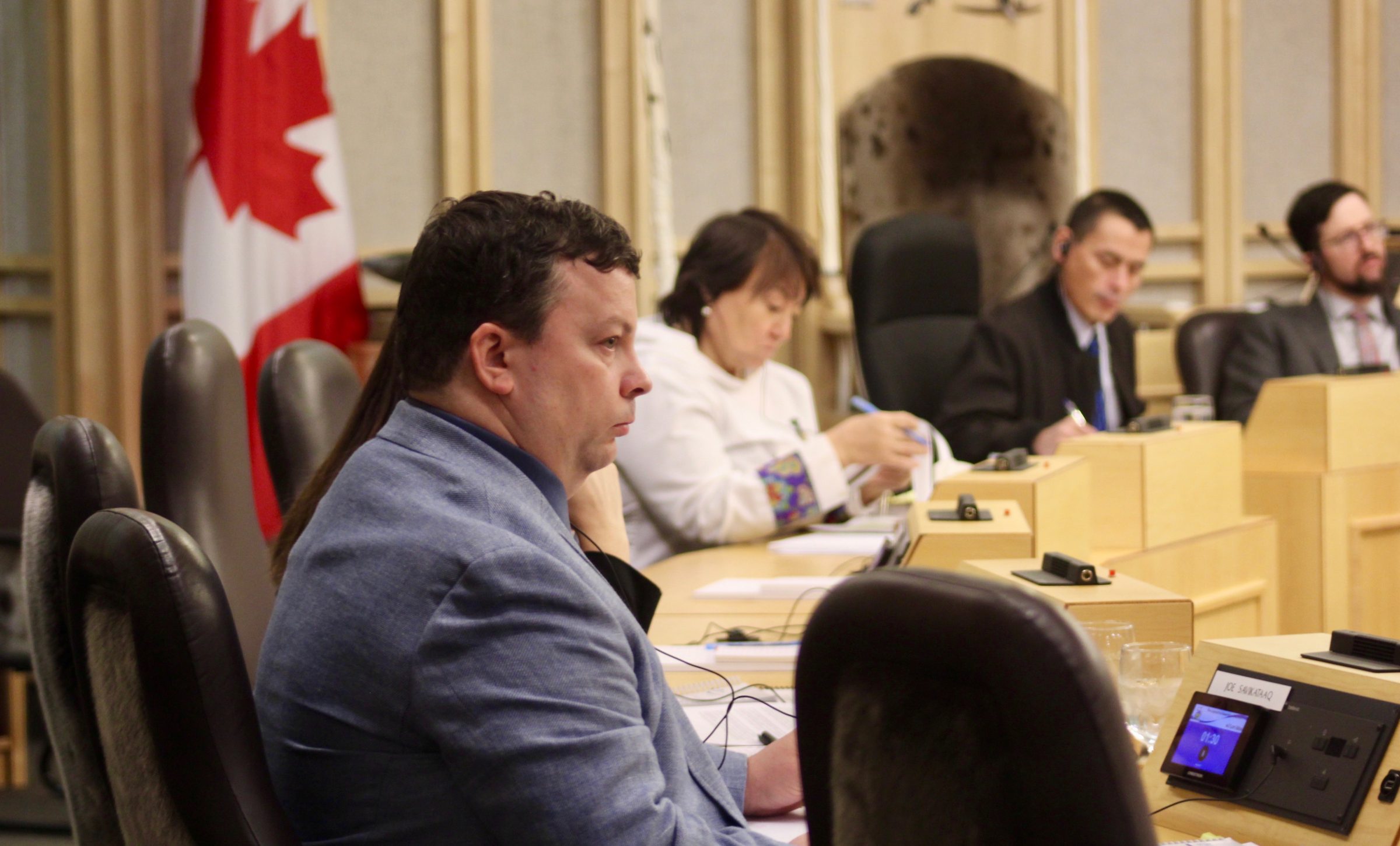 John Fanjoy, president of the Nunavut Teachers’ Association, listens to questions from MLAs during the second day of the standing committee on legislation’s public hearing on Bill 25. (Photo by Emma Tranter)

The amount of resources dedicated to supporting students in Nunavut has eroded over the years, says Iqaluit’s District Education Authority.

Student support was the focus of discussion on the second day of the standing committee on legislation’s public hearing on Bill 25, An Act to Amend the Education Act and the Inuit Language Protection Act.

On Tuesday, the standing committee heard from the Iqaluit DEA, the Gjoa Haven DEA and the Nunavut Teachers’ Association.

Doug Workman, president of the Iqaluit DEA, called on MLAs to reject Bill 25.

He also proposed several recommendations as alternatives to the bill, which included a call to change the student-educator ratio in the territory’s schools.

The student-educator ratio is a calculation used to determine the number of teachers assigned to each school by calculating the number of students who attend a school divided by the number of educators in the institution.

Workman asked the committee to consider adjusting the ratio to include “non-attenders,” referring to students who show up on the first day of school and don’t regularly return, along with full-time students.

The issue was also raised in late September during a two-day sitting to discuss a report on support for Nunavut’s high school and adult learners released by Canada’s auditor general in June.

During that sitting, Adam Arreak Lightstone, MLA for Iqaluit-Manirajak, and John Main, MLA for Arviat North–Whale Cove, criticized the Department of Education’s use of the student-educator ratio. In June, Main said that although attendance is high during the first few weeks of school, it drops off.

“If they [the students] keep showing up, they don’t have enough staff to handle them, and so poor attendance is kind of baked into the system,” Main said in June.

John Fanjoy, president of the Nunavut Teachers’ Association, also asked the committee to consider an amendment to Bill 25 that would change the student-educator ratio so it applies to classroom teachers only. This would differ from including school administrators, such as counsellors, in the calculation.

“We believe that the student-educator ratio should be applied to classroom teachers,” Fanjoy said.

Main, who also chairs the standing committee, asked Education Minister David Joanasie to clarify what his department is doing to address the issue of the student-educator ratio.

Joanasie said the department wants to provide a more equitable distribution of staff among the territory’s schools.

“We are still in the development of a revised formula, which would capture all school staff positions.”

He added that although Bill 25 does not amend the student-educator ratio, the department’s plan is to present a business case to include the revised formula in its 2020-21 business plan.

Bill 25 would also provide principals, instead of DEAs, with the authority to oversee the implementation of inclusive education in their schools, where students with special needs are taught in the same classes as other students.

Both Fanjoy and Workman said they disagreed with the proposal included in Bill 25  to give homeroom teachers the responsibility to develop individual student support plans, or ISSPs. Currently, the development of ISSPs is shared between members of the school staff, including dedicated student-support teachers.

Fanjoy said the proposed changes would take away responsibility from student support teachers.

“If Bill 25 passes as written, student-support teachers would be stripped of most of their responsibilities, which would fall on the already overworked classroom teacher,” Fanjoy said.

Joanasie clarified that the bill would mean that student-support teachers would still be in place and would provide support to homeroom teachers.

“We are wanting to have the main teacher develop the ISSPs to ensure the teacher who spends the most time with the student in the classroom takes ownership for developing, implementing, evaluating students’ progress,” Joanasie said.

Fanjoy also called on the committee to consider Nunavut’s “current recruitment and retention crisis” of teachers in its review of the bill.

He added that nearly half of the NTEP graduates leave the profession within the first five years of employment.