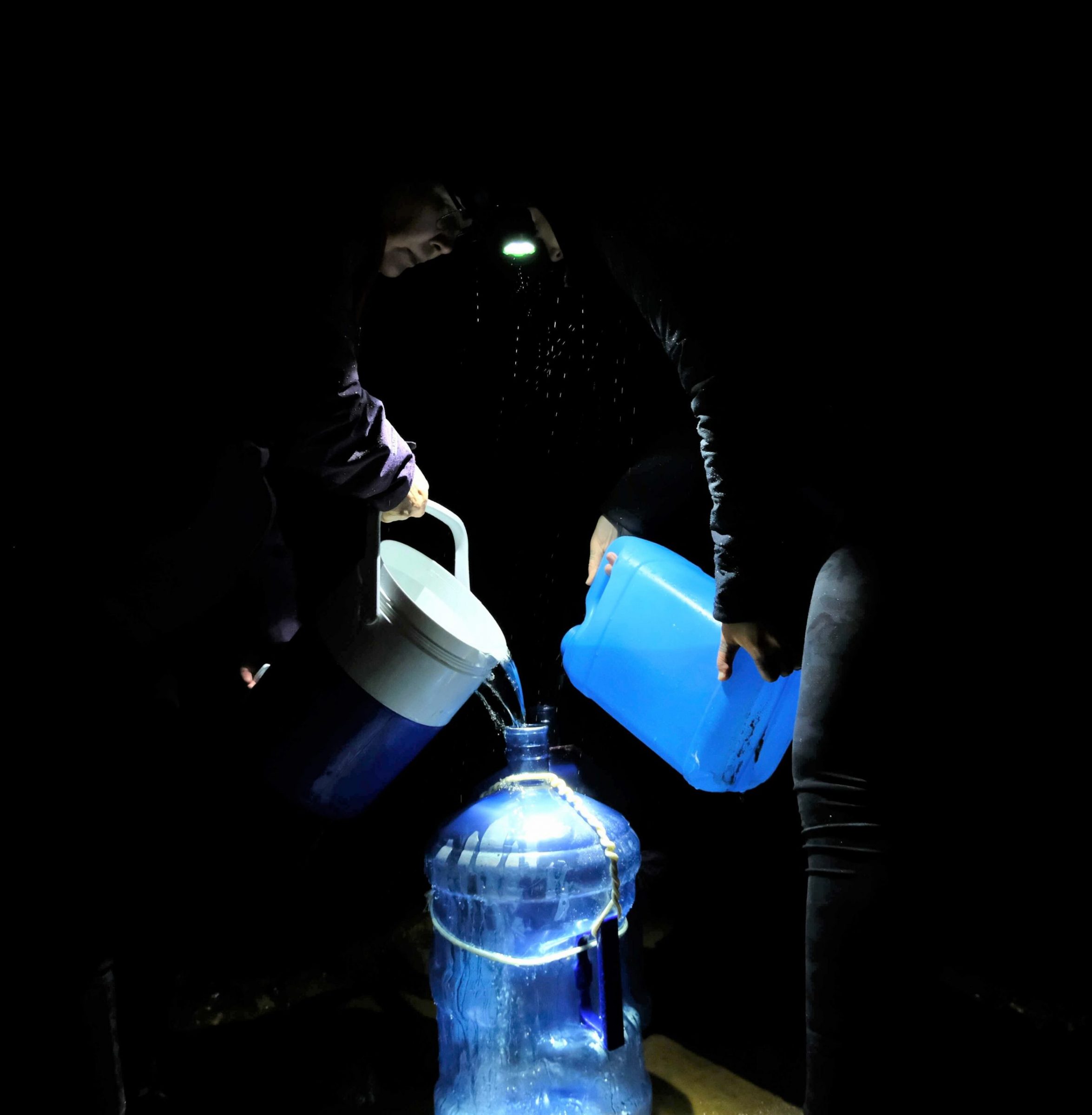 Two unidentified Iqaluit residents fill water jugs at the river near the Road to Nowhere Tuesday night. City council declared a state of emergency Tuesday after test indicated some type of petroleum product had contaminated the municipal water supply. (Photo by Mélanie Ritchot)

Iqaluit city council has declared a state of local emergency because some type of petroleum may have contaminated the city’s water supply.

There is no information on how the petroleum may have entered the water supply or when it happened.

“We suspect that there is petroleum — some type of petroleum product — that has entered the water system,” Elgersma said.

The city will receive results from samples in five to six business days, she said.

At its peak, council’s emergency meeting at 5:45 p.m. had 400 viewers on its Facebook livestream. Council met behind closed doors for about 30 minutes before Elgersma delivered the statement. Councillors are permitted to meet privately to discuss some specific topics but any decision they make must be reported publicly.

To help residents get water, Elgersma said the city had two water depots open until 9 p.m. Tuesday — beside the library and Arctic Winter Games arena — where the city was distributing water from the Sylvia Grinnell River. Residents are required to bring their own jugs to be filled.

She said that no one should consume the city’s tap water.

The city set up a “drinking water hotline” at 867-979-5603 for Iqalummiut who have questions for the city during business hours.

Nunavut’s Department of Health issued a similar warning later Tuesday, specifying that no water should be used for drinking or cooking “due to the possibility of petroleum hydrocarbons” in the water supply.

“Pregnant women, newborns and infants should not take baths or be bathed in tap water. Do not use tap water to mix infant formula,” states a news release. The water remains safe for laundry, cleaning and showers, it said.

Earlier on Tuesday, Iqaluit Mayor Kenny Bell warned residents not to drink the city’s tap water after workers noticed a “strong smell of gas” in the water at Iqaluit’s plant.

All residents, whether they receive water through pipes or trucked service, are affected, he said.

“It’s everything. Any treated water,” he said.

The city initially said that its daily water tests came back “satisfactory” and suggested that chlorine might have been the cause of the odour.

Bell said he spoke Tuesday with Canadian North airlines to ensure that the city will have cargo space available to send water samples to an Ottawa laboratory.

Correction: This story has been updated to correctly state how officials have determined a possible contamination in Iqaluit’s water on Tuesday.