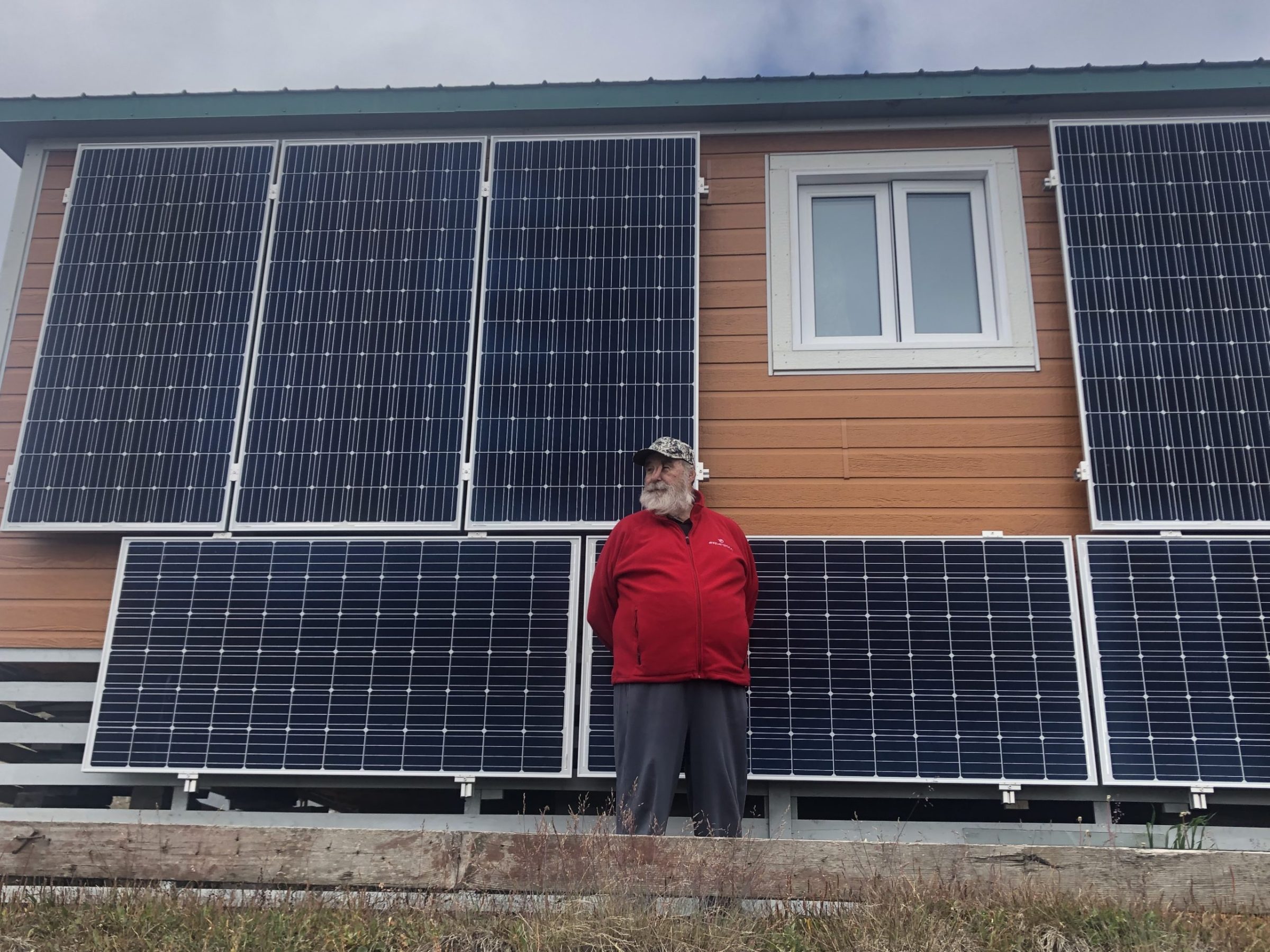 Bert Rose standing in front of his solar panels at his home. Climate change is a large motivator for Rose to get the panels, as he has to think about the world his grandchildren will live in, he said. (Photo by David Lochead)

Bert Rose has been involved with solar energy since he was 12 years old, when his younger brother bought a solar panel.

Now 78, Rose has them draped across his Iqaluit home.

He had them installed in August 2021, with help from the Government of Nunavut’s Renewable Energy Homeowners Grant Program. As of March 31, 81 cabins had been approved for solar panels, as were three homes, according to the GN’s director of the climate secretariat, Cameron DeLong.

Rose, who also happens to be one of the people who installed solar panels onto the Arctic College in 1992 and served on the board of directors for Qulliq Energy Corporation until 2019, said battling climate change was the main motivator for setting them up at his home.

Nunavut’s 25 communities are powered by diesel, and the Arctic climate is warming at three times the rate of the global average.

Rose said his reason for caring about climate change is simple.

“I’ve got two grandchildren,” he said.

“I have to worry about their world.”

But Rose added his solar panels not only make sense environmentally, but economically as well.

The total cost of the panels and installation was just over $26,000, but after subtracting the GN grant of $12,400, Rose paid approximately $14,000 out of pocket. He estimates his energy savings will exceed that in about six years.

Rose said he is already seeing significant savings to his energy bills. His electricity bill was about $150 in July 2021, before he installed the panels. This May, Rose only paid one cent for electricity.

Rose’s home produces excess energy when the sun shines 24 hours a day. For the surplus energy Rose produces, he receives credits from Qulliq Energy Corporation, which in turn lowers his bills.

As well, the excess energy he produces during the summer can be banked by the energy corp. in the form of a credit that can be redeemed when there is less sunlight to generate energy. That means Rose’s winter power bills are cheaper, too.

“Until that comes in place, nothing happens,” Rose said about getting Nunavut off fossil fuels.

The GN’s renewable energy support program allows home owners to receive up to $30,000 for renewable energy that is installed into their homes. Meanwhile, cabin owners can receive $5,000 for solar panels for their cabins.

Correction: This article has been updated to correct the dates of the program. It has also been updated to state that Rose receives credits from QEC for the surplus energy he produces, as a previous version incorrectly stated he sells his excess  energy to QEC.