Iqaluit photographer explores Nunavut capital one day at a time 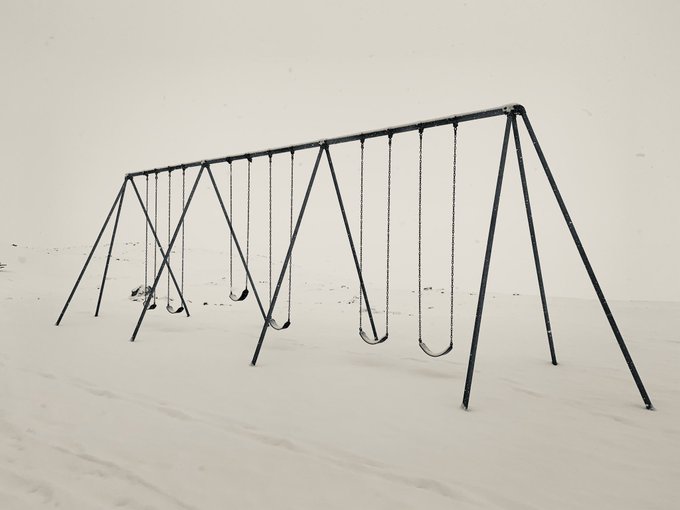 “This photo was taken the day after Nunavut shut down last March due to COVID-19,” says Iqaluit photographer Frank Reardon, who has been taking black-and-white photos of the city every day in 2020. “The swings really captured our mood, and there were no more kids playing together at playgrounds … they were all isolated at home.” (Photo by Frank Reardon)

Iqaluit photographer Frank Reardon has moved through 2020, with its pandemic fears and challenges, one day at a time.

On Jan. 1, he embarked on a project to take and post a black-and-white photo of Iqaluit every day.

“I always wanted to do it and challenge myself. It’s a lot of photographs that tell a story — which what my black-and-white project is … the story of Iqaluit,” Reardon said.

The photos include a gritty matchbox house covered in graffiti, sublime scenery outside Nunavut’s capital and aircraft of all kinds.

“You can see a lot of my photos are based around aviation, too, as aviation is such a huge part of Iqaluit life,” he said.

Many of the photos reveal tiny details, such as barnacles hanging on to a rock or summer flowers — “things you would never see down south.”

Others feature ravens and people, including his own son, pilots, Nunavut’s premier Joe Savikataaq with his grandchildren, and Iqaluit’s mayor Kenny Bell.

Some photos took less than a second to shoot, while others were “planned and planned and planned,” Reardon said. And many had been rolling around in his head for years, ever since he moved with his family from Arviat to Iqaluit in 2010.

Reardon, who works in information technology for the Nunavut Court of Justice, can travel a lot with the circuit court.

“But 2020 has been a great year to do my photos because you couldn’t really travel. If it was any other year, I probably wouldn’t have been able to accomplish this historical project.”

Reardon goes out to photograph in every kind of weather. His wife made him a special parka, which covers his ears and has longer cuffs on the sleeves so he can move his hands inside to warm them up.

Usually Reardon shoots with bare hands, slipping them out of beaver skin mitts and lighter gloves inside. He keeps extra batteries in his pockets and a second camera body in his truck so he can keep photographing even in the bitter cold.

The coldest temperature so far was a day in Iqaluit that saw a low of -40 C, with a wind chill of -56 C.

But the weather isn’t the only challenge Reardon faces. There’s also his left eye, which is artificial.

Reardon, 49, was born with congenital cataracts. He lost his left eye in 2014.

But he works around that.

“I honestly believe that when I see things I just focus straight on that thing. It’s almost like my eye is the lens. And when you shoot with a camera, you only have one lens,” he said.

But now he risks losing sight in his other eye.

“It scares the hell out of me. That’s one reason I have been photographing so much the last couple of years. I photograph every single day because I know at some point I will be losing my sight and not be able to do that again,” he said.

Reardon’s work has featured on a Canadian stamp after he posted a photo of a perfect sundog over Iqaluit on The Weather Network’s website.