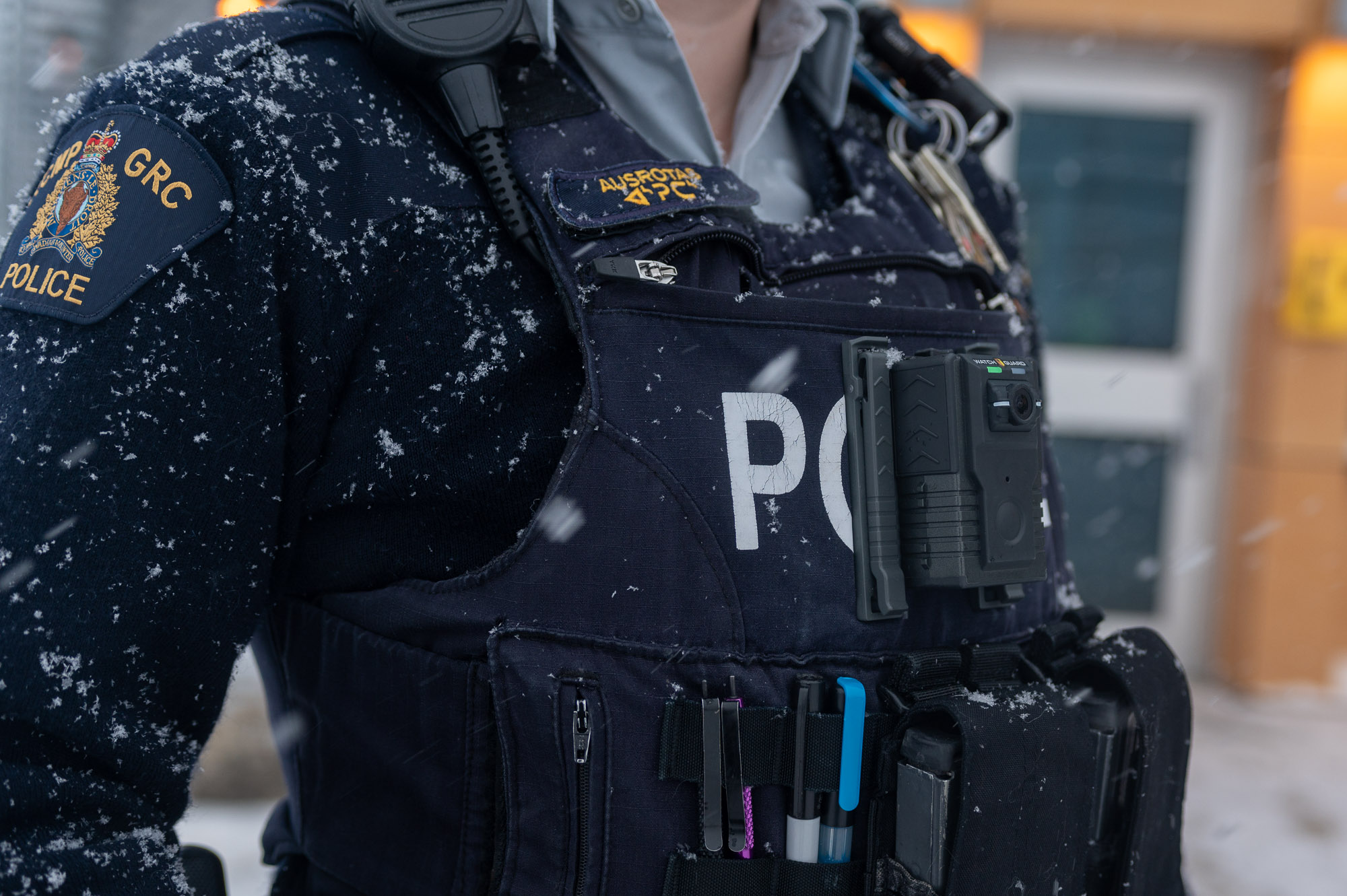 Body-worn cameras, such as the one pictured here, have been worn by two Iqaluit RCMP officers per shift since Nov. 30. (Photo by Dustin Patar)

The cameras, which rolled out Nov. 30, are part of a six-month pilot project that could be a first step towards the use of the devices across the territory and beyond.

They are intended to record interactions between officers and someone they may arrest. Officers have discretion to leave the cameras off in some situations, such as when they’re speaking with victims of crime.

During the first phase of the project, two out of six officers per shift are equipped with the cameras.

MacIntosh said so far, the cameras have been well received.

“We have not had any negative interaction in the sense of somebody saying, ‘We don’t like them, we don’t want them or turn it off,'” he said.

In-person community sessions aren’t feasible right now due to the COVID-19 pandemic, so the RCMP has launched a a confidential online survey in Inuktitut, French and English. MacIntosh says that a paper copy of the survey can also be filled out confidentially at the RCMP station in Iqaluit.

“It’s really important for us to be able to get the feedback from the community,” said MacIntosh.

The RCMP say that the survey results will help them adjust use of the cameras during the pilot program. The results will also be reported to the Nunavut government.

“We’re very open to suggestions,” said MacIntosh. “Nowhere do we think that we have all the answers because we certainly don’t.”

Use of the cameras is guided by written policy, which is available to anyone who requests a copy. But one expert thinks the police could be more transparent.

“We shouldn’t be having to ask for this,” said Erick Laming, a PhD candidate in criminology at the University of Toronto.

“There’s nothing in it that’s scandalous, just put it on the website and make it accessible for everyone.”

In contrast, Nunavik’s Kativik Regional Police Force, which began its body-worn camera pilot project earlier this year, hasn’t made its policy document available to the public at all.

Laming says the Nunavut policy has a “good balance overall,” although he feels it lacks in two areas.

The language instructing supervisors to conduct regular reviews of the recordings is “very vague,” he said.

“There’s nothing on auditing or random auditing, which is in place in a lot of U.S. jurisdictions,” Laming said.

“There’s no evidence here that anything will happen,” he said.

As it stands now, the policy is a fluid document, and changes have already been made to it, MacIntosh said.

If an officer is involved in a situation that may result in an independent investigation, such as last summer’s incident in Kinngait that saw a man knocked to the ground by the door of an RCMP vehicle, the camera and the footage will go directly to the investigating team.

“That’s an effort to be more transparent and more consistent nationally with how we treat independent investigations and video,” MacIntosh said.

But Laming wonders what the public will be shown. He cited examples of use of force cases that didn’t result in serious injury and were internally investigated and cleared.

“Are they going to release footage from those incidents?” asked Laming.

“There’s no clear message or communication that that is going to happen and that’s the whole purpose of transparency and accountability.”

Phase two of the project rolls out Jan. 11, with four officers wearing cameras. All six Iqaluit RCMP officers will be wearing them when the third phase begins, on Feb. 15.

An earlier version of this story said that the pilot program would be nine months long, when in fact it will be six months long.