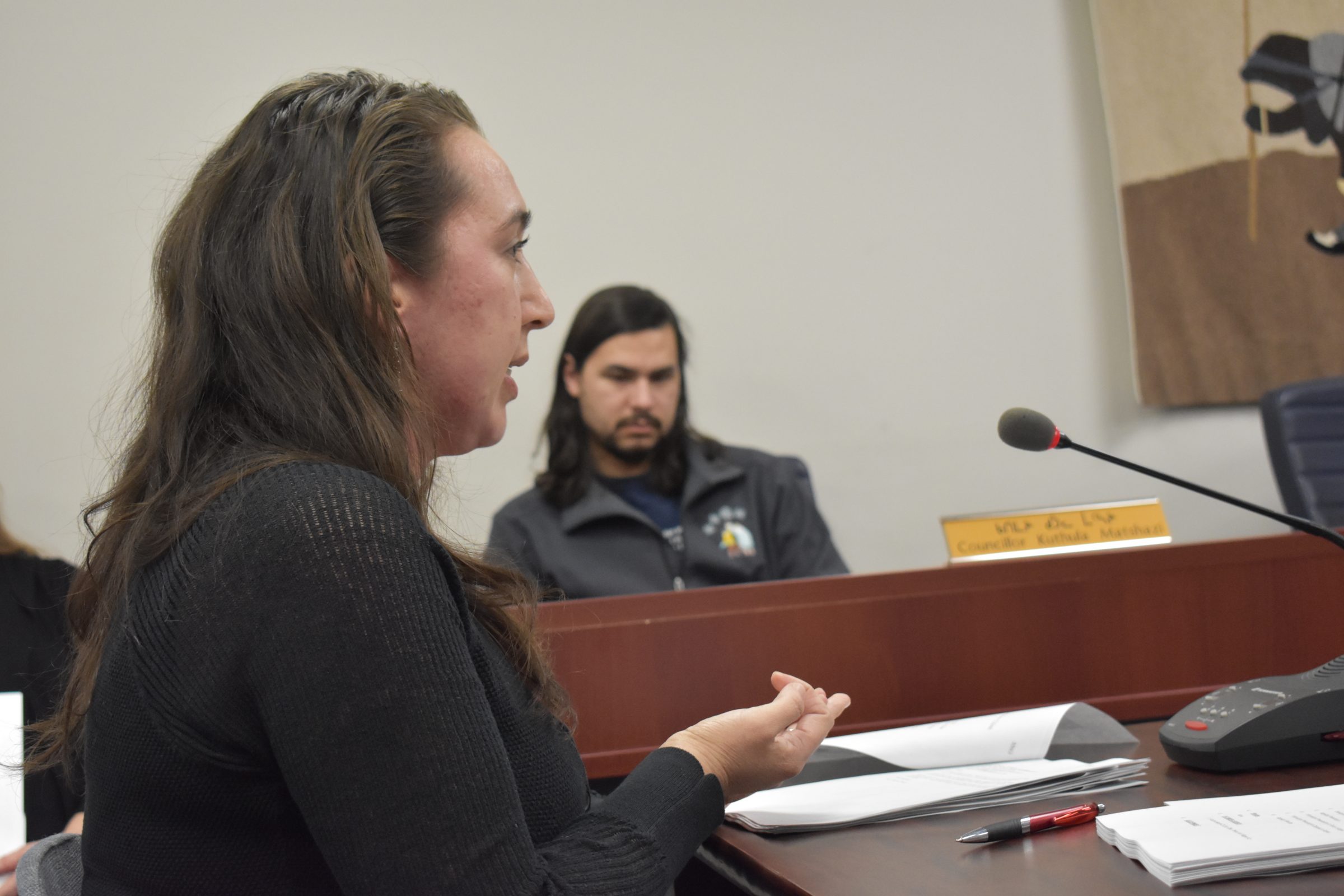 Naya Reynders is a neighbour of the house in Iqaluit’s Happy Valley that is slotted to become Arctic Children and Youth Foundation’s Umingmak Centre this April. She appealed the development, saying that it is not a residence or a residential care facility and does not fit into a residential zone. (Photo by Courtney Edgar)

Plans to turn a vacant house in Iqaluit into a safe space to offer services to abused children is getting push-back from a neighbour.

Naya Reynders is appealing plans to turn the house next door to her Happy Valley home into the Umingmak Centre, which will offer support to child victims of sexual abuse, violence or other trauma.

The project is spearheaded by the Arctic Children and Youth Foundation, in partnership with the Department of Justice, RCMP and Nunavut Tunngavik Inc.

Reynders, who spoke at an Iqaluit development appeal board hearing Monday night, said she supports the Umingmak Centre’s mandate.

But she contends that the centre does not qualify as a “residential care facility,” which is how ACYF describes the centre in its development application.

“Looking at the plan, it is quite obvious that the primary use of this space is a workspace or an office for multidisciplinary teams to address trauma,” Reynders wrote in a Feb. 27 email, the day before the appeal deadline.

“This area of town is not zoned for offices and that is stated in the development permit.”

She told the development appeal board that she understands the organization would like the centre to feel like a residence. Part of the Umingmak plan is for the building to look like a home on a quiet residential street so it projects an image of safety.

In her view, the centre does not fit the criteria of a residential care facility, since there are no plans to offer supervised in-home care for those who need assistance with daily living.

“I believe that the city and the developers need to be more transparent and correctly define the centre as a workspace and office as this is the primary use of the majority of the building,” Reynders said.

Sarah Clark, ACYF’s executive director, and one of three employees who would work at the Umingmak Centre, said that 68 per cent of the building will be residential, 26 per cent office space and six per cent mechanical space.

The residential space is intended to be used for families who need to travel from other Nunavut communities for medical, social and legal support after a child is abused.

“After hearing the purpose and operation of the Umingmak Centre, and the proposed use of House 562 as a centre to improve the response to child abuse, we hope that the development appeal board will interpret the centre as analogous to a residential care facility, and acknowledge the large benefit of having such a centre in Nunavut,” Clark said.

She also explained that she followed the development application process under the guidance of the city.

Jennifer Jarvis, an Iqaluit city planner, told the appeal hearing that “the proposed use will operate in a manner that is compatible with surrounding uses and will not result in any negative impacts.”

The Umingmak Centre’s proposed use is consistent with the intent and policies of the residential community category in the general plan, she said. As well, she said the zoning bylaw gives a development officer authority to interpret categories as needed.

With that authority to improvise, Jarvis says the proposed use of the building meets all R1 provisions, conditional use criteria and special conditions in Section 5.4 in the zoning bylaw.

About 20 people showed up to the development appeal board hearing. That meant a handful of people had to stand against the wall or sit in empty councillor chairs.

Speaking in support of Reynders’ appeal was her father, John Maurice.

Six people showed up to speak in opposition to the appeal, showing support for the ACYF and the Umingmak Centre.

The director of family services, the child and youth advocate and the representative for children and youth all showed up to speak in support of the centre.

Another speaker was an employee at the Department of Justice, who represented the minister by reading Justice Minister Jeannie Ehaloak’s Feb. 22 statement in the legislature to announce the creation of the Umingmak Centre.

As well, two of the women who showed up to oppose the appeal shared their experiences surviving child abuse.

Rachel Michael, who helped with the centre’s feasibility study, said she could have used a place like the Umingmak Centre when she was sexually abused as a child.

“I believe the impact has a more positive benefit for the whole of Nunavut,” Michael said.

Iqaluit city council is expected to make a decision on the appeal by April 9.