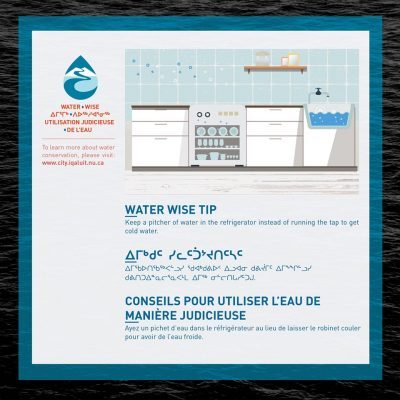 One of the City of Iqaluit’s suggestions for conserving water is to keep a pitcher of drinking water in the fridge, rather than waiting for the tap to run cold.

If you live in Iqaluit and you were hoping to hose down your car or boat after a long winter, you’ll have to hold off.

The City of Iqaluit is still working to conserve its freshwater supply and continues to maintain its ban on car washes.

This week, that ban was also extended to all motor vehicles—including boats—whether they are commercially or personally owned.

“The city would like to remind residents to continue to be water wise, and conserve our water supply,” the city said in a May 30 release.

Though reports commissioned by the city have pointed to looming water shortages, city officials were forced to react quickly last year when water levels hit a critical low.

Lake Geraldine, which supplies the city’s freshwater, relies on the summer months to fill before the winter freeze. Typically, the reservoir is full by October, but that didn’t happen in 2017.

An assessment prepared for the city last year showed declining levels of precipitation, coupled with the lowest water levels the city had seen in over a decade—factors suggesting a potential water shortage to come.

A task force struck to look into the issue recommended the city supplement its freshwater source with water from the Apex River, which it did ahead of the winter months.

Even then, city officials put in place a ban on washing cars; they also asked residents to opt for showers over baths and to keep pitchers of drinking water in the fridge, rather than letting the tap run until cold.

A Nunavut Water Board review is currently underway to look at the city’s latest proposal to pump more water from the Apex River from 2019 through 2026.

As for its current ban, the city said it will grant certain exemptions to emergency vehicles for health and safety reasons.