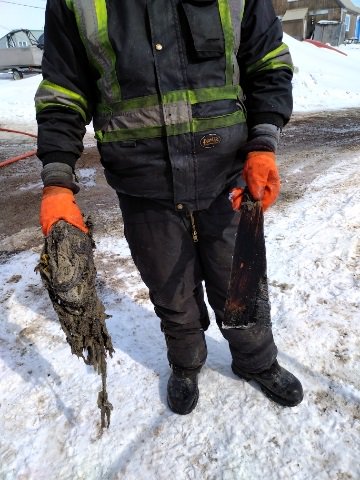 An Iqaluit municipal worker holds an example of some of the stuff pulled the pipes near the city’s lift station, which is once again working. (Photo courtesy of City of Iqaluit)

An Iqaluit sewage lift station is once again operating at full capacity, after city workers used a special vacuum to suck out debris that had plugged a six metre length of pipe.

The station was shut down March 28 and temporarily spilled sewage into Koojesse Inlet.

The blockage consisted of old rags, plastic bags, grease and other assorted plumbing and household items, according to a city news release.

Lift station has now been fixed.

Photos of items removed from pipes that clogged 6 meters of city pipe system that caused complete blockage and overflow.

On April 19, the city purchased a high-efficiency vacuum, which later proved to be successful in clearing out the debris.

The city reminds residents to only flush toilet paper down toilets.

City officials say they continue to monitor the situation.