City needs to tackle boredom and to have ‘serious conversation’ about racism, Mayor Kenny Bell says after weekend incidents 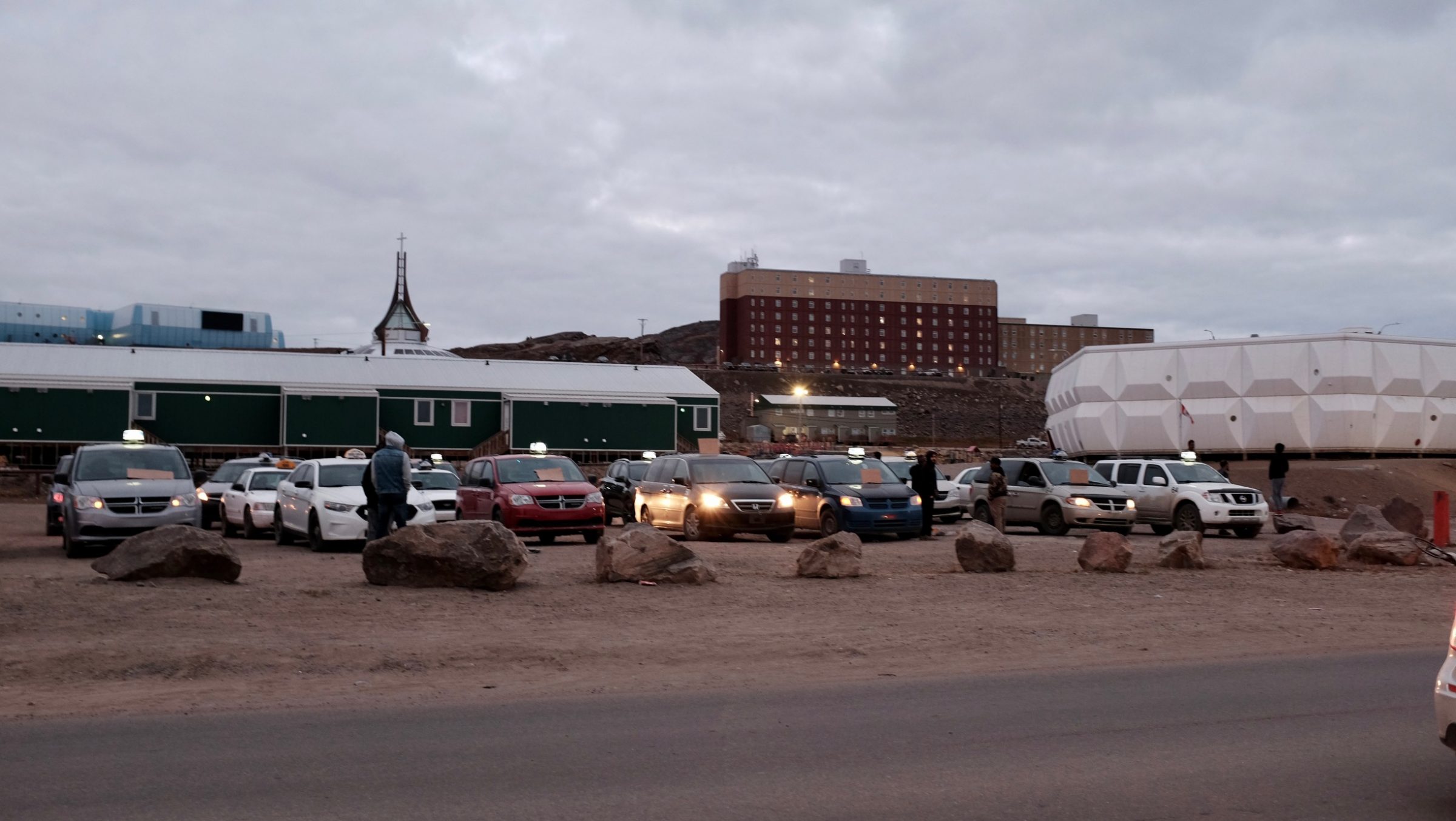 Iqaluit taxi drivers parked their vehicles Saturday night to protest what they describe is harassment and racism they face doing their jobs. (Photo by Bill Williams)

By David Lochead and Corey Larocque

Boredom among some Iqaluit kids younger than 12 is responsible for incidents of rock-throwing at taxi drivers that prompted cabbies to stop driving for a few hours Saturday night, Mayor Kenny Bell says.

Bell called a meeting for Monday afternoon with representatives from the city, RCMP, Justice Department, taxi companies and drivers to figure out how to keep cabbies safe on the job.

While taxi drivers alleged the incidents are racially motivated, Bell said he didn’t think any particular driver was targeted. But, the mayor acknowledged, his community needs to have a “serious conversation” about racism.

“I think it’s kids just being bored,” Bell said in an interview after the meeting. “Bored and out there doing dumb stuff.”

Rocks being thrown at taxis is not a new thing in Nunavut’s capital in recent years, as the increasingly diverse city has seen an influx of Black residents. Many of the city’s taxi drivers are people of colour. Getting parents to talk to their kids about racism and about the dangers or throwing rocks is one of the steps the city and RCMP will take as a result of Monday’s meeting, Bell said.

On Saturday, six taxi drivers reported the rock-throwing incidents — which resulted in three cracked windshields — to city bylaw enforcement and to the police. Municipal enforcement considered it mischief, which is a police matter, but RCMP had other calls on the go at the same time.

Caribou Tuktu Cabs owner Danny Savard said RCMP were contacted repeatedly but only responded to half the calls. The RCMP did not respond to a request to comment from Nunatsiaq News.

The perceived lack of response prompted the cabbies to park their cars in protest of what the drivers say are violence and racism they face doing their jobs. It forced business, including bars to temporarily shut down.

“It was just a boiling point were drivers felt they weren’t being heard,” Bell said.
On Monday, Daniel Frezghi, a driver with Caribou Tuktu Cabs, told Nunatsiaq News he joined the protest because his own windshield was broken last year from rock-throwing. 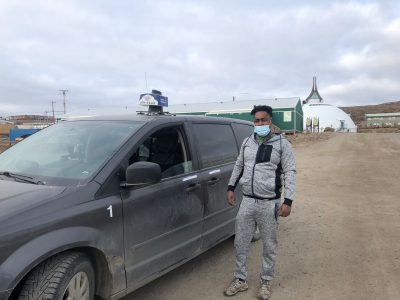 Daniel Frezhi, a taxi driver, said he has had a wine bottle thrown at his car. He was among the cabbies who walked off the job Saturday after a rash of rock-throwing incidents. (Photo credit David Lochead)

Taxi drivers who own their own vehicles have to pay for damage like this. Frezghi said the broken windshield cost him $1,500.

“That’s my car, I have to repair it,” Frezghi said, adding that mechanics are expensive in Iqaluit and it can take three weeks for parts to be shipped.

Beyond rocks, Frezghi said that he has had a wine bottle thrown at this car before.

Frezghi said the road along NorthMart and the area around DJ’s Specialties Convenience Store are some of the worst areas for getting hit with rocks. It was rock throwing in those neighbourhoods, paired with little response from RCMP, that motivated the taxi drivers to strike Saturday, he added.

The mayor said part of the solution is to find young people something to do, while protecting taxi drivers on the job, as well as their customers.

Police and city officials plan to visit some homes identified by the taxi drivers to talk to parents about the importance of safety and respect.

They’ll consider going into schools to educate students, tagging along with fire prevention officers, who already have programs aimed at school-aged children.

There will be an update on the situation at the Oct. 4 meeting of the city’s public safety committee, said Bell, who is the chairperson of the recently formed committee.

“Some of the kids think that they are not wanted, not supported.”

At the same time, parents have a responsibility to teach their kids about racism.

“We have to have a serious conversation and move past the name-calling. I’m asking parents to talk to their kids about throwing rocks.”

Bell said taxi drivers deserve a safe working environment and they are an important part of the transportation network, especially in a city without public transit.

“We need them on the road,” the mayor said.