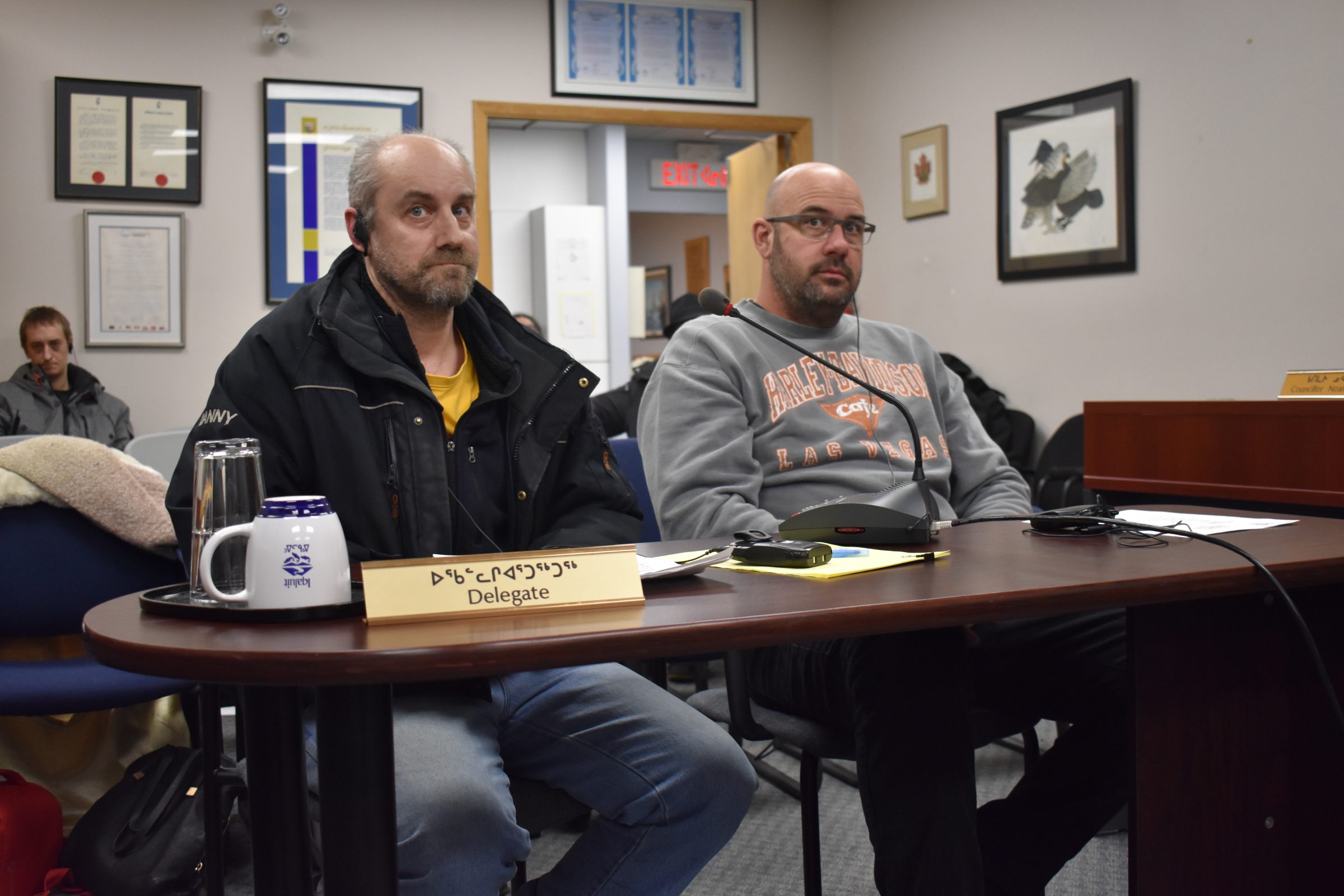 Danny Savard, the owner of Caribou Cabs, sits with Stephane Montpetit, the former owner of Pai-Pa Taxi, at an Iqaluit taxi review committee meeting on March 28. Savard reminded the committee that he had asked for a taxi fare increase last year, which had been approved by the committee but never made it to council. (Photo by Courtney Edgar)

Iqaluit residents will likely soon pay $8 instead of $7 for regular taxi rides.

Elders’ fares would stay at $5 and the fare for longer drives to the end of Road to Nowhere would also not increase.

Iqaluit city council has drafted a new taxi bylaw that is currently under legal review and should be ready for first reading in about a month.

It will make for many changes to the people who ride in taxis. The biggest will be a requirement for all taxi vehicles to be under 10 years old.

Danny Savard, the owner of Caribou Cabs—which now includes Pai-Pa taxis in its fleet—said this means about 75 per cent of its roughly 70 vehicles will need to be taken off the road and replaced.

All of the vehicles will also be required to have four-wheel drive. Most currently do not.

“We feel that these requirements will be successful in ensuring an improvement in customer service and we agree with the initiatives being implemented,” Savard said.

“However, the additional costs incurred require us to push for the increase, as well as a pre-pay stipulation.”

Savard expects these specific requirements alone to cost about $20,000 per car. He also said it will be impossible for the company to do that within a year. It will have to be a gradual process, over the course of three to four years, he said.

All of the required upgrades to taxi vehicles will cost “well over $1 million.”

The new draft bylaw would also make it so that all of the vehicles will be held to a standard of cleanliness that will be new to the company.

Each vehicle will be inspected regularly and if they are found to be too filthy, the driver responsible for the vehicle could be fined or taken off the road.

Savard also said that cameras are going to be added to every vehicle.

All Caribou Cabs vehicles will be filming taxi rides and driver-client interactions within the next two weeks.

This, Savard said, will help the company increase the level of customer service and help the business manage customer complaints and driver accountability.

He has heard that sometimes drivers let people out at the wrong location, or don’t step out to help elders or carry groceries or luggage for customers, which drivers are expected to do.

The cameras will also help drivers hold customers to account.

Savard said he has heard from all of his drivers, and from the other smaller cab companies, that in the last few years it has become very common for people—youth in particular—to jump out of a cab without paying and run for it.

This happens about five times a day to each driver, Savard said.

“It’s a major issue for all taxis,” Savard said.

The new draft bylaw would also help to solve that, by making it a standard rule that all passengers pay the fare in advance, right when they get into the vehicle.

Some of these changes were actually supposed to have come into force last year.

Savard explained at a Wednesday, March 27, taxi committee meeting that in February 2018 the fare increase had already been approved by the committee. The fare change does not need to be in a bylaw, but it does need to be passed as a motion by council.

It was supposed to be passed in council after the February meeting last year, but when there was staff turnover at the city and within the committee, last year’s meeting minutes were lost and the fare increase just never made it to council.

“The chief who was the resource person of the committee had to leave unexpectedly and is on leave and we have not been able to retrieve those at this time,” said Amy Elgersma, the city’s chief administrative officer.

“I do know that there was a discussion, I do know about the meeting, but I do not have the actual minutes to draw from at this time.”

Coun. Simon Nattaq, who is new to the taxi review committee and chaired the meeting, said he would make sure this request makes it to council this time.

“We will be more diligent and take care of this business sooner than later,” Nattaq said.