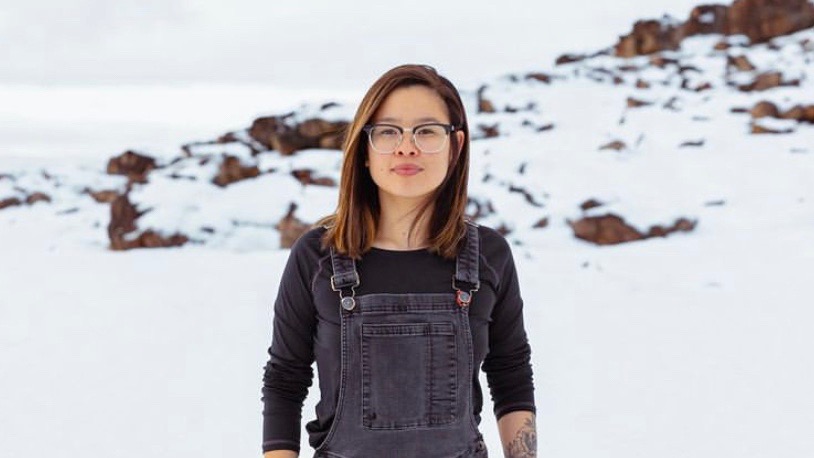 Iqaluit resident Annie Buscemi has been posting daily videos talking about Inuit-specific “reasons to stay alive” for four months and teaching people across the world about Inuit culture. (Photo provided by Annie Buscemi)

Every morning, Iqaluit resident Annie Buscemi starts her day by saying, “Ullaakkut, good morning,” in a video, followed by an Inuit-specific reason to stay alive.

Feb. 17th’s reason was traditional Inuit namesakes. The next day’s was for people who know how to properly work with seal skin.

This unique approach to addressing mental health issues in the territory has earned Buscemi the Young Inuk Woman of the Year Award from Pauktuutit Women of Canada in January.

“It just has all felt like a complete dream,” she said about the award. “I only started this a few months ago and I never saw it taking me to where I am today … This is such a heavy topic to tackle, and some days are harder than others, but just to see the response that it’s getting from other Inuit, it makes me so happy.”

This is the first year the organization has given out the award.

Buscemi said the daily affirmations started as a way to lift her own spirits after a hand injury last summer prevented her from going back to work as an apprentice electrician. Now, she says, they’ve changed her life.

“That has been my passion … and I was really, really devastated when I wasn’t able to work for a while,” she said.

But now, “I wake up with a certain gratitude that I’ve never had before … I’ve never been so happy to be alive,” she said.

One of the 117 reasons she has posted about so far is the moment after not eating country food for a long time and finally being able to have fish or caribou or seal meat.

In another post, she describes nights spent camping out with friends to watch the sun set and then rise again about an hour later.

Buscemi said she looks for new reasons to share with her followers while out on walks, or when she is spending time with her grandmother or friends.

“There’s so many beautiful aspects of the culture,” she said. “Mostly it’s just coming from my own love for life.”

After her first three video posts back in October, she said she started to see a huge response, not only from Inuit, but from people all over the world who enjoy her daily teachings about Inuit culture and traditions.

People in her community have also started approaching her to tell her they appreciate the videos.

“People are so grateful and it makes my heart full,” she said. “It just makes me want to keep going.”

Even so, Buscemi said some days it can feel overwhelming to think about continuing to create the videos for a long time.

The suicide rate among Inuit was nine times higher than in non-Indigenous populations between 2011 and 2016, when 250 deaths by suicide were reported, according to Statistics Canada.

“It’s such a heavy, heavy topic for me to talk about,” she said.

Buscemi says she suffers from depression and anxiety. She said she has had to focus on staying grounded and allowed herself to take a break from posting the videos for a bit in January.

“A lot of people would tell me, ‘I look forward to your videos every day,’ then hearing that over and over and over … I found that the more that I pushed myself to do it for other people … I wasn’t doing it authentically anymore.”

Now, Buscemi said she tries to stay in the mindset that she is doing this for herself, as well as for other Nunavummiut.

She even goes back to watch the videos herself when she gets overwhelmed, she said.

Buscemi is gradually returning to her electrical career as her injury heals, but she said she hopes to continue creating the videos.

Her TikTok account is @annieneevee and her Instagram handle is @ullaakkut, which means good morning in Inuktitut.